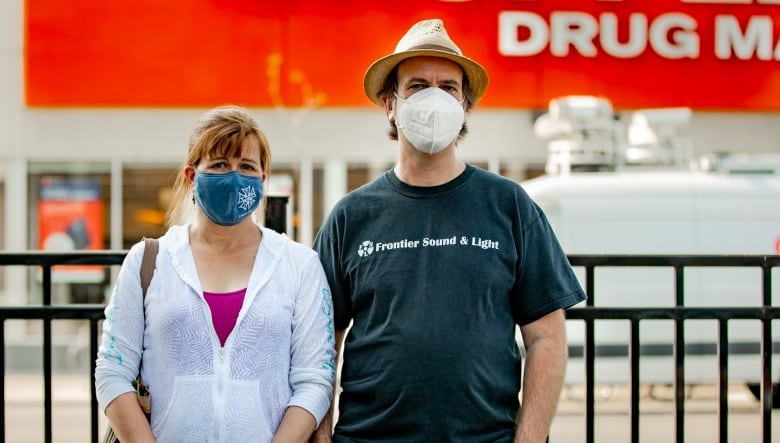 Michael Kerwin said he was furious when at two Toronto-area Shoppers Drug Marts last month, he was told he must purchase his goods using self-checkout — unless he paid with cash.

Self-checkout machines at the drug store chain only accept debit and credit cards.

“When they basically say, ‘If you don’t have cash, we’re not even taking you at our cashier’ … that’s where it started to be a bit of a line in the sand for myself,” said Kerwin. “I want the option to deal with a real human being.”

Over the past several years, many Canadian retailers have added self-checkout machines, claiming they provide a convenient option for customers.

But for the second time in two years, CBC News has heard accusations from Shoppers customers that some of the chain’s stores are pushing people to use self-checkout.

Concerns about lack of choice, staff

CBC News interviewed six people in Alberta, Ontario and New Brunswick who each said that during a recent visit to a Shoppers store, an employee directed debit and credit card payers to self-checkout. All but one of the customers said they were emphatically told they could only check out with a cashier if they paid with cash.

Lorrie Perko said that was her experience when visiting a Shoppers last month in Waterloo, Ont.

“[An employee] stood there with her hands crossed, and she said, ‘Head office said, unless you’re using cash or buying lottery [tickets], you have to use self-checkouts now.'”

Perko said she didn’t have enough cash, so she begrudgingly used self-checkout.

Today <a href=”https://twitter.com/ShopprsDrugMart?ref_src=twsrc%5Etfw”>@ShopprsDrugMart</a> Belleville. One cashier at self-checkouts. I wanted to be checked out. She said only for cash. Debit has to use these. I’ll help. I said, I prefer not to. She said, your choice. So I handed her my basket and left. I’m a radical. 🤷‍♀️

Hi Charles, We’re sorry to read that you aren’t a fan. We are always looking for ways to make customers’ shopping trips as convenient as possible. We appreciate your feedback and will be sure to share it with our Store Operations team.

Perko said she should have been given a choice. Other complaints from customers interviewed included concerns the machines weren’t cleaned often enough or that their use would result in reductions in staff.

“They’re trying to maximize their profits by having [customers] do the work,” said Kerwin.

The chain’s parent company, Loblaws, did not respond to questions about whether the introduction of self-checkout machines at Shoppers has resulted in any job losses.

During a November 2020 Loblaws earnings call, the company pinpointed self-checkouts as one of its “efficiency initiatives” and said it has helped the retail giant cut operating costs.

In 2019, several Shoppers customers interviewed for a CBC News story also complained they were told to use self-checkout unless paying with cash.

Around that same time, two Shoppers employees in Ontario told CBC that their supervisors were pressuring them to push customers to use the self-checkout machines.

Loblaws told CBC News in 2019 that it expects stores to always offer customers the option of checking out with a cashier.

“It is not our intention that customers feel they do not have a choice, and we have reminded all stores of this expectation,” said spokesperson Catherine Thomas at the time in an email.

As for the latest complaints, CBC News contacted the five Shoppers stores where customers said they were pushed to use self-checkout. Each store said to contact head office.

Loblaws told CBC News its policy hasn’t changed and that customers should always have the option of using a cashier.

The company didn’t address the recent claims except to say that it hasn’t seen an increase in customer complaints about self-checkouts.

Shoppers has, however, addressed several similar complaints on social media in which customers said they felt pushed to use the machines.

In response to one complaint posted last month, a Shoppers spokesperson wrote: “Recently, we’ve increased our investment in self-checkouts and their technology based on our customer feedback.”

During the pandemic, the chain has “seen a significant increase in self-checkout use, with customers looking to minimize interaction with others or for a faster checkout option,” Thomas said. “We watch these metrics closely, along with our in-store customer satisfaction, and believe they tell a more accurate story.”

A new survey out of Dalhousie University in Halifax also found that self-checkouts have become a popular choice for consumers.

According to the survey, almost 40 per cent of the 10,000 Canadians polled online in May said they planned to use self-checkout most of the time when shopping at grocery stores within the next six months.

The survey’s lead investigator, Sylvain Charlebois, said that fears of catching COVID-19 have likely motivated some people to use self-checkout when shopping.

‘Vote with our feet’

But not everyone has embraced self-checkout during the pandemic. Determined to have a cashier ring in his goods, Kerwin said he paid cash and that during one of his Shoppers visits, his girlfriend, Colleen Pilger, left the store and went to a bank teller at a nearby bank to get enough cash so they could use the cashier option.

WATCH | Customers share their experiences with self-checkout at Shoppers:

Shoppers Drug Mart customers in three provinces are complaining that they were forced to use self-checkouts to pay for their purchases unless paying cash. Customers Michael Kerwin and Colleen Pilger left the store to get cash from a bank because they wanted to use a cashier. 1:21

Kerwin said customers should always have the option to pay with plastic at the cash register, especially during the pandemic, so he won’t be returning to Shoppers until he’s assured he can do so.

“All we can do is vote with our feet,” he said. “I would highly encourage people to not shop at those places that don’t allow you to deal with a cashier using a debit or credit card.

Despite some customers’ resistance, self-checkouts may become even more ubiquitous as stores continue to embrace automation.

Currently, retail giants Walmart and Amazon are trying out large-scale stores without cashiers in the U.S. Amazon has set up a full-size grocery store in Seattle with no employees involved in the checkout process.

“Technology is going to become a much more important part of the overall retail landscape, whether it’s self-checkouts or completely cashierless,” said Marion Chan, a consumer analyst at TrendSpotter Consulting in Toronto. “In the long term, the technology will win.”

Even so, customer complaints about self-checkout may be resonating with some retailers.

Walmart’s new cashierless store in Fayetteville, Ark., includes more than 30 self-checkout machines placed in a giant U-formation. However, customers can still request that an employee, called a “host,” scan their goods for them at self-checkout and even bag their items.

“It’s the host’s job to make sure the checkout experiences are exactly what customers want them to be,” said Walmart in a statement.

* The Dalhousie University survey referenced in this story was designed and conducted online by research company, Caddle. A randomized sample of this size would yield a margin of error of +/- 1.3 per cent 19 times out of 20.