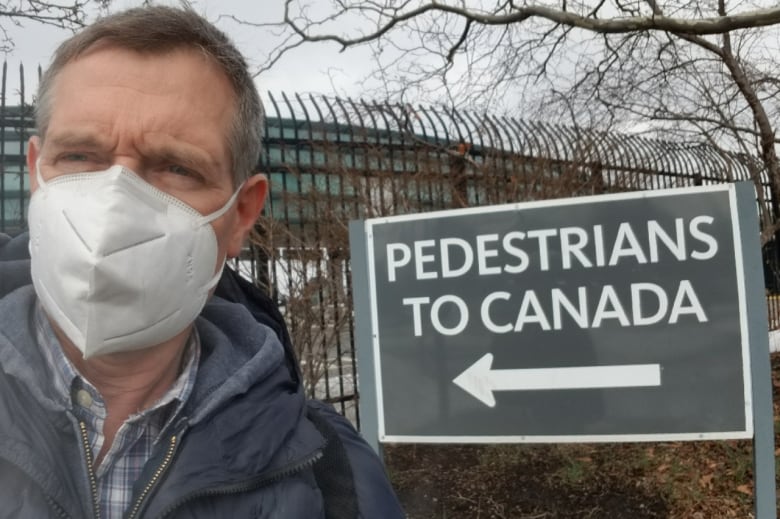 Greg Peacock walked across the Rainbow Bridge in Niagara Falls, Ont., and back into Canada with his three puppies in hand, pausing to take some selfies, but he didn’t cross here for the view.

He chose this particular point of entry from the United States to avoid the mandatory three-day stay at a quarantine hotel that applies to air travellers entering Canada.

“I don’t want to spend three days or whatever it is locked up at a hotel when I’m back in Toronto to do work,” he said.

He’s one of the many Canadians flying into U.S. airports close to the U.S.-Canada border and crossing by foot or hiring car services to drive them across in order to avoid staying at the quarantine hotels that are mandatory for air travellers.

Instead of flying directly to Toronto’s Pearson International Airport, Peacock flew from Los Angeles to Buffalo, N.Y., took a cab to the border, walked into Canada and took the train to Toronto.

“It takes a little bit longer, but it’s an adventure,” he said.

Peacock told CBC News that he would quarantine once he got home.

Walking across the border isn’t new or illegal, but it does contravene non-essential travel advisories and allows travellers to avoid staying in one of the federally sanctioned quarantine hotels that can cost up to $2,000 for a three-day stay — a requirement for those arriving by air.

The temporary measures and the Canada-U.S. land border closure, which went into effect in March 2020, have both been extended to May 21.

Peacock is not alone. Since the hotel rules came into effect on Feb. 21, nearly 20,000 people crossed the border by land (not including essential workers), according to a CBC News analysis of numbers provided by the Canada Border Services Agency (CBSA).

Whether Canadians return by land or air, if they are not essential workers or otherwise exempt, under federal guidelines, they must quarantine for 14 days, with air travellers spending the first three days at a hotel until they get the result of a COVID-19 test. Land travellers must go directly to their quarantine destination after crossing the border.

Scott and Caryl Rutledge of Toronto opted to fly to Buffalo Niagara International Airport and hire a limousine to take them across the border rather than to fly home from Tampa, Fla., where they have property and spent the last two months

“We’ve been vaccinated. We showed up with negative COVID tests,” Scott Rutledge told CBC News as he and his wife sat in the back of the limousine on the Canadian side of Rainbow Bridge in Niagara Falls.

“We believe ourselves to be 100 per cent healthy so far as COVID is concerned, and so anything else was an unnecessary duplication. It’s excessive in the extreme, at least as it applies to us.”

The couple paid about $350 Cdn for the trip from the Buffalo airport, plus $200 US each for their COVID-19 tests.

They said there should be different rules for snowbirds like them.

“I think there should have been two tiers of entry: one for snowbirds — vaccinated people who have been gone for in excess of months — and … different rules perhaps for people who have gone on a holiday for two weeks. It’s a completely different thing,” Caryl Rutledge said.

Although land borders are closed to non-essential travel, all Canadian citizens have the right to enter Canada. But like air travellers, they need to present a negative COVID-19 test taken within 72 hours of arriving at the border and have a quarantine plan.

For those who travel from abroad via the United States, a negative test needs to be presented upon arrival in the U.S., according to the U.S. government, and again at the land border when entering Canada.

Travellers are also given a take-home test to be done on the 10th day of their return.

There are no exemptions for those who have already been vaccinated.

The CBSA told CBC News that it is not keeping track of Canadians who return to the country after getting a COVID-19 vaccination abroad.

But the Public Health Agency of Canada (PHAC) does keep track of travellers who have tested positive for COVID-19.

The agency is also monitoring quarantine compliance for both air and land travellers with the help of local law enforcement agencies, the RCMP and third-party security companies.

Between Feb. 21 and April 19, more than 111,000 air travellers and 43,000 land travellers had received a compliance verification visit from a third party, according to PHAC.

And during the same time frame, both the RCMP and local law enforcement agencies followed up on 13,500 air travellers and 5,900 land travellers — 95 per cent of whom were found to be in compliance with the quarantine orders.

Prices for flights to Buffalo on the rise

In an email to CBC News, Canada’s public health agency said that “compliance with the border measures has been high.”

CBC News asked for comment from Health Canada on why people travelling by air are required to go to a hotel while those entering the country by land are not but did not get a direct response.

Health Canada did say in an email that “the government of Canada is continually evaluating the impacts of border measures.”

Land border crossings could get more attention in light of Canada’s decision Thursday to ban passenger flights from India and Pakistan for 30 days in response to rising COVID-19 case counts and the spread of new variants.

Airlines seem to have also caught on to the land border loophole. Prices for flights to Buffalo from popular snowbird destinations such as Tampa, Orlando, Fla., Phoenix, Ariz., and Los Angeles have all seen a hike since the quarantine hotel rules went into effect in Canada.

“I felt pretty clever at first, but apparently, more people are catching on,” said Peacock, who travels back and forth on a monthly basis to be with his spouse in Los Angeles.

“The flights to Buffalo were packed. The prices are going up.”

WATCH | How some Canadians are getting around quarantine rules for air travellers:

Travellers coming to Canada from the U.S. are avoiding hotel quarantine by taking flights close to the border, then walking or driving into Canada. Some snowbirds say there should be different rules for people who spend months at a time in the U.S. and are fully vaccinated. 2:16

Ground transportation services are also getting a boost.

About 30 kilometres from the Rainbow Bridge, at the Peace Bridge in Fort Erie, Ont., Bethea Reznik sits in her van in the nearest parking lot to the border.

She reads while waiting for a Canadian passenger to be dropped off by an American car service. She’ll then drive the Canadian to Toronto.

American bus and taxi drivers are considered essential service providers, which allows them to shuttle Canadians over the border.

“I’ve been quite busy,” she said of her own business. “I just try to help people as much as I can.”

Reznik said she’s making about two round trips from Toronto a week.

She said she feels for her passengers who are affected by the extra steps now required to get to where they want to go.

Parked near Reznik’s van, Alison Noble waits for her son, Eric Noble-Marks, to be dropped off by an American taxi. The Boston law student was returning home to Toronto.

Noble-Marks said he’s vaccinated but given how little is still known about the ability to transmit the virus post-vaccination, he opted for a land crossing because it seemed safer than flying.

“I wanted to do something where I minimized changing hands as much as possible,” he said.

He plans to quarantine at home with his mother, he said.

Noble-Marks said he isn’t opposed to requiring travellers to stay at a quarantine hotel if it helps slow the spread of COVID-19, but it shouldn’t come at a cost.

“It’s one thing to stay in a hotel for a few days. It’s another thing to be on the hook for it,” he said.

‘I was not going into a hotel’

For some travellers who spoke to CBC News, avoiding a hotel stay wasn’t about the cost but about health.

Betty Bennett, who winters in Arizona, took an American car service from the Buffalo airport back to her home in Orillia, Ont., because she was adamant about going straight home.

“I would not go to any congregate settings after hearing what’s happened with the nursing homes,” she said. “So there was not even a choice for me … I was not going into a hotel.”

PHAC told CBC News that as of April 18, 45,194 hotel rooms had been booked at government-authorized accommodation using the Global Business System, which does not include rooms that travellers have booked directly through hotels. Each of those bookings could include multiple rooms and/or guests.

The majority of rooms have been booked in Toronto with 26,454, followed by Vancouver with 10,921.

About 49,000 air travellers, representing 11 per cent of the total, have been exempt from staying in a hotel.

As for fines for those dodging a hotel stay, PHAC told CBC News that as of April 19, it is aware of 404 tickets given to travellers who didn’t book a hotel or refused to stay in one.