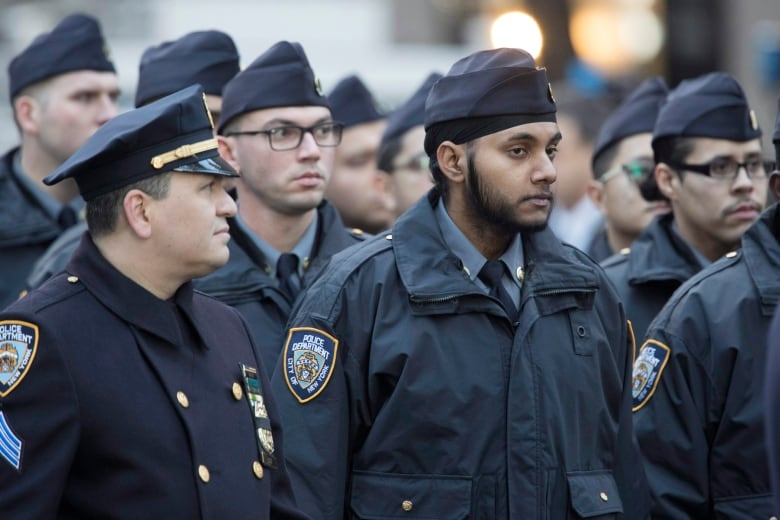 When Sukhman Singh Shergill was a little boy, police cars would make him turn his head in excitement.

He collected police badges and notebooks, watched cop shows and told anyone and everyone around him: “I’m going to be a police officer one day.”

Shergill is now 15, and his dream remains the same.

“I love the [idea of] helping the community,” Shergill said. “It’s out of love for people. I love people. I want to make them comfortable.”

He watched with admiration as his older cousin, Gurvinder Singh, blazed a trail in New York City.

As president of the New York Police Department’s Sikh Officers Association, Singh helped lead the charge for the NYPD to change its uniform policy in 2016, allowing officers to wear turbans in place of the traditional police cap.

Watch Sukhman Singh Shergill explain why he wants to be a police officer. 1:11

Shergill has long envisioned carving out his own place in Montreal history by becoming the first officer to wear a turban in the city’s police force, the Service de police de la Ville de Montréal (SPVM).

“Since he was born, he’s always wanted to be different, to do something to be remembered,” said his mother, Manpreet Shergill.

The Quebec government’s proposed Bill 21, which would ban public workers in positions of authority, including teachers, lawyers and police officers, from wearing religious symbols, has only strengthened her son’s resolve.

“I’m going to fight it,” said Sherghill, a Grade 9 student at a high school in Montreal’s Pierrefonds neighbourhood.

“I feel targeted by it because I can’t be a police officer anymore, and they’re just destroying my dreams like that,” he said. 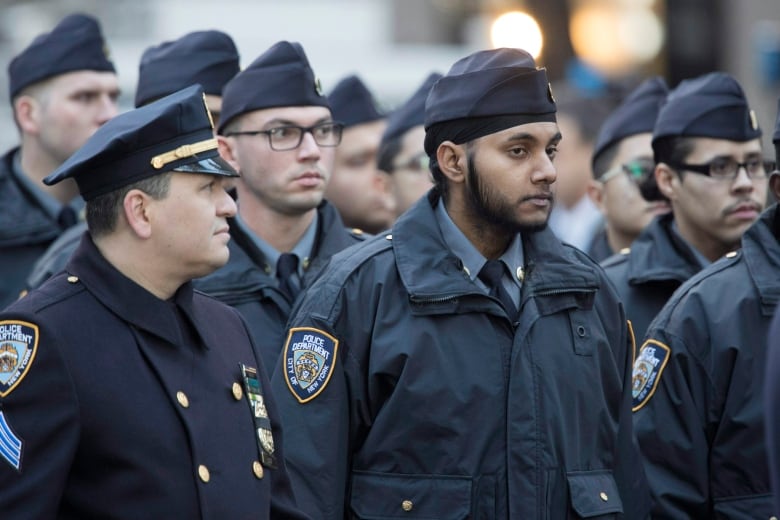 Last weekend, he created a new Facebook group — the Quebec Association of Sikhs — and posted a video explaining his opposition in the hope of galvanizing support.

Shergill, however, faces an uphill battle.

Quebec Premier François Legault has said he’d consider compromising on some aspects of the bill — but not the prohibition on police wearing religious symbols.

The issue flared up last year when Sondos Lamrhari, who wears a hijab, came under public scrutiny for her plans to become a police officer. The Coalition Avenir Québec, the Official Opposition at the time, took a hard line.

The position is consistent with the 2008 Bouchard-Taylor report into the accommodation of minorities, which suggested that public workers who exercise the coercive authority of the state, such as police officers and prison guards, be barred from wearing religious garb.

But the authors also acknowledged that “a police force is likely to more readily gain the trust of a diversified population if it is diversified and inclusive.”

In a statement, Montreal police spokesperson Marylou Bossé said the SPVM is closely following the progress of Bill 21 but hasn’t taken a position on religious symbols.

The city’s police union has said it’s in favour of the ban.

In the past, representatives from the SPVM have said the question is only theoretical since no one wearing a hijab or turban has applied to work on the force. 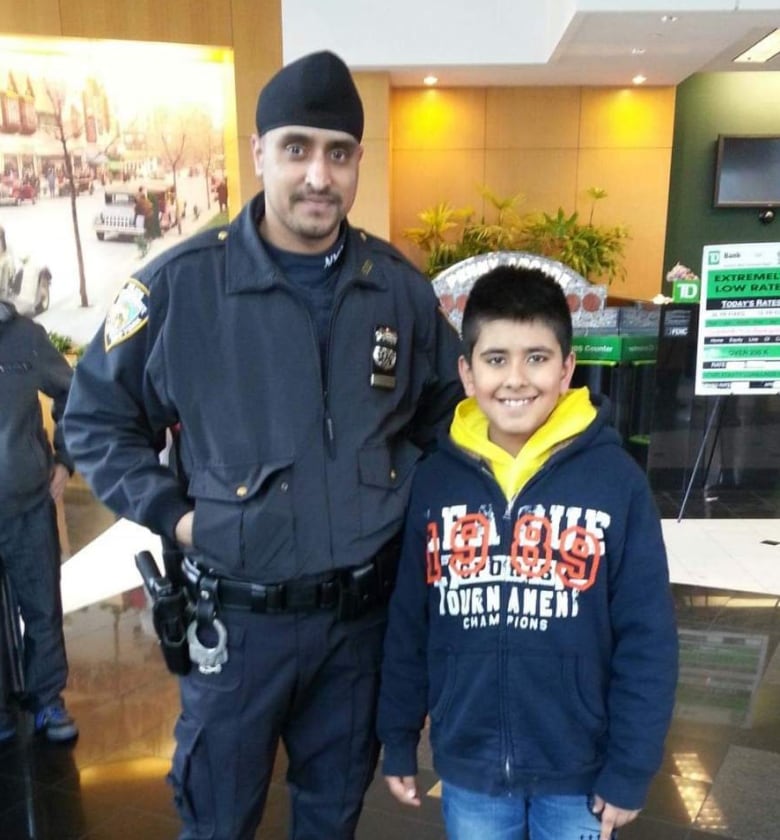 Sukhman Singh Shergill, right, is 13 years old in this 2013 photo. He’s pictured with his older cousin, Gurvinder Singh, who helped lead the charge for the NYPD to change its uniform policy in 2016, allowing officers to wear turbans in place of the traditional police cap. (Submitted by Manpreet Shergill)

Still, Marvin Rotrand, a Montreal city councillor, has been saying for years that local police need to be more welcoming.

He wrote a letter to the city’s executive committee last year asking that Montreal follow the lead of the RCMP, as well as cities like Edmonton, Toronto, Ottawa, Calgary and Vancouver, in allowing police officers to wear religious clothing and symbols.

Mayor Valérie Plante said at the time she was open to the idea but has yet to take action.

Rotrand said he’s planning to table a motion at next month’s city council meeting urging her to make the change.

The SPVM has struggled to diversify its pool of officers despite launching a recruitment drive last year aimed at minorities and Indigenous people.

“It doesn’t take very much work to approve changes to your uniform rules, which will tell minorities [that] if they are otherwise qualified and have all the degrees and finished the training, they will be hired,” Rotrand said.

“People are not going to spend years to become qualified and spend the money to go through all the courses, and then go through the police academy, only to be told there is no job for them.”

Singh, the president of the Sikh Officers Association, said the change to the NYPD’s policy signalled to young minorities in New York that the police force was part of the community.

It has also helped other members of the police force gain a better understanding of the Sikh religion, he said.

“When they respond to a [call], they might be able to relate better.” 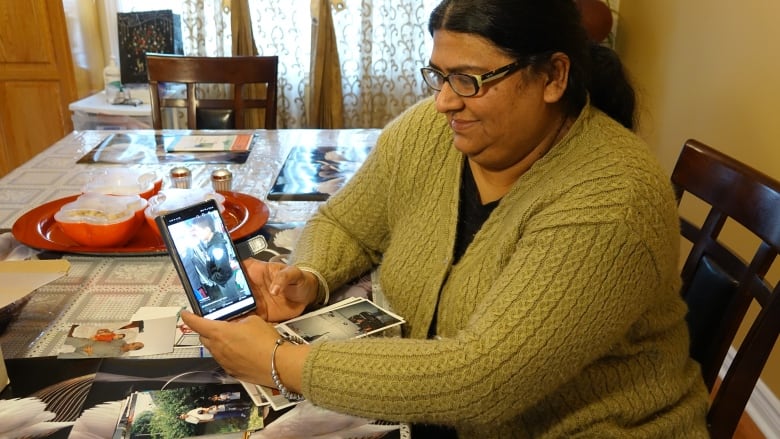 Manpreet Shergill says her son has always wanted ‘to do something to be remembered.’ (Claire Loewen/CBC)

Since the new policy, Singh said there’s been a small influx of Sikh officers. His association now has more than 150 members.

The Toronto Police Service (TPS), which has allowed officers to wear religious symbols such as the hijab since 2011, said the change in policy is part of a broader attempt at inclusivity.

“What we’re trying to create is an inclusive police force and a service that values and respects individuals and various cultures and backgrounds,” said Suelyn Knight, manager of diversity and inclusion with the TPS.

If Bill 21 becomes law, Shergill said he won’t move away to pursue his dream. He’s determined to make Montreal police reflect the city’s diversity by joining the force himself.

“I want to show people that this is our religion,” Shergill said. “We would like to be a part of the Quebec society, and be more comfortable.”