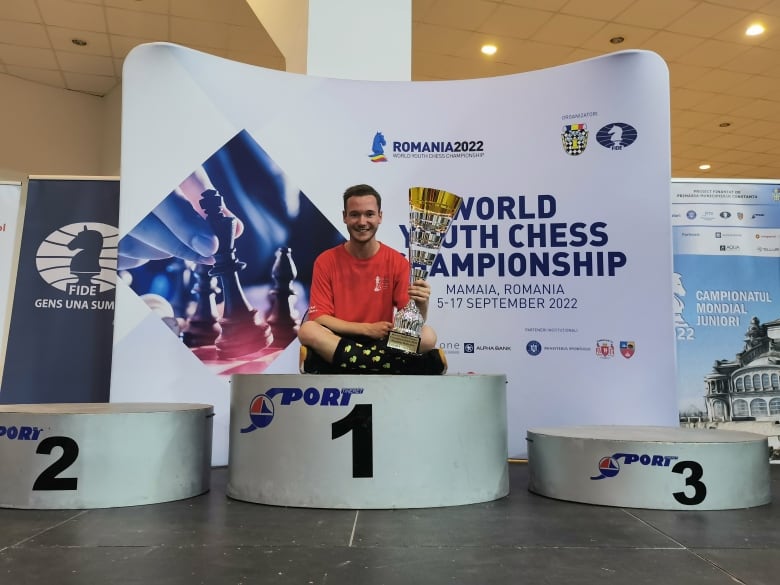 An 18-year-old from Montreal’s Hochelaga-Maisonneuve neighbourhood was crowned this year’s World Youth Chess Champion — becoming the first Quebecer and only the second Canadian to hold the title.

Shawn Rodrigue-Lemieux took home the trophy after beating out players from 54 countries at the world under-18 chess championships last week in Romania.

He scored nine points out of 11 — seven victories and four draws. Among those he beat was Kazybek Nogerbek of Kazakhstan, who finished second in the rankings. He posted a draw against Marius Fromm of Germany, who finished third.

“It’s not really something I expected,” said Rodrigue-Lemieux of his historic win. “The start of the tournament wasn’t so great but suddenly, the wins just kept coming and at the end, it was great.”

With this win under his belt, the teen is just two more victories away from becoming a grandmaster— the game’s highest honour.

“He could become the youngest Quebecer in history to earn the title of grandmaster,” said Richard Bérubé, general manager of the Quebec Chess Federation (QCF).

Some 1,200 players are international grandmasters, according to the QCF, including Quebecers Kevin Spraggett, Pascal Charbonneau and Thomas Roussel-Roozmon, who received the title at the age of 22.

‘I never expected it would lead to this’ says mother

Rodrigue-Lemieux didn’t grow up in a chess-obsessed household, but started learning at the age of six in an after-school program.

“I just decided to register to learn what chess was and [I’ve] loved it ever since,” he said.

But Rodrigue-Lemieux’s mother said this was never the intention. Isabelle Rodrigue said her son was very energetic and she’d hoped the game would simply help him focus. She didn’t really care if he excelled at it or if it became a passion of his.

“Those weren’t my expectations,” she said. “It was really just that he’d stay calm and seated and that he’d develop his concentration a bit … I never expected it would lead to this.”

Those in the local chess scene say they hope Rodrigue-Lemieux’s victory will give the game a boost.

Larry Bevand of the Chess’n Math Association says they’ll be in his corner as he tries to rise to the rank of grandmaster.

“Now that Shawn has won the World Championship, we’re already planning to subsidize him for the rest of the quest,” he said.

As a social studies student with a specialization in law at Collège de Maisonneuve, Rodrigue-Lemieux said he wants to pursue those studies, but isn’t ruling out a career in chess.

“I want to go to university, but chess is also part of my future,” he said.