Lots of sniping in UCP leadership race, but so few shots fired over inflation 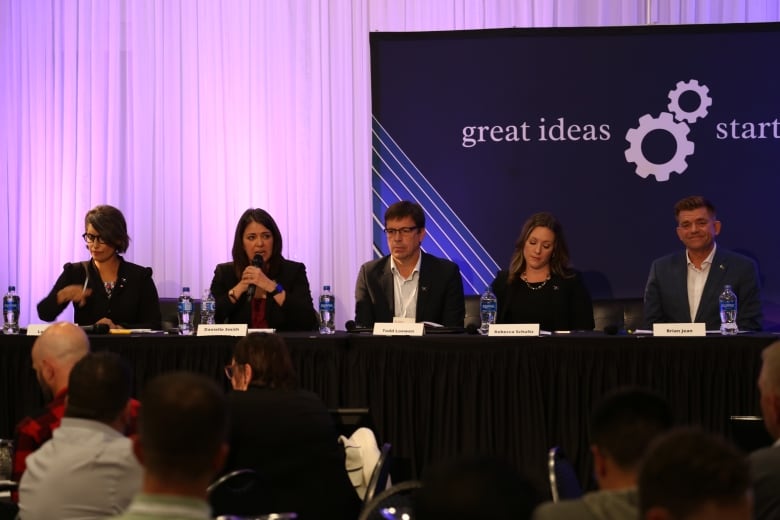 Many would-be successors to Premier Jason Kenney have gamely taken aim at him this campaign, from his past approaches toward COVID and Ottawa to his occasional interventions as lame-duck United Conservative Party leader with weeks left to go in his power seat.

So what kind of dust did Kenney kick up among leadership candidates when his cabinet pledged where the province’s $13.2-billion oil-price-fuelled surplus would go — a bit to inflation-proofing income tax charges, some to Alberta’s savings fund and the rest to debt repayment?

Not much dust got kicked up, really. Because generally, the candidates would have done just what the outgoing premier did with the extra money.

There’s been no shortage of sniping during the race to become UCP leader and Alberta premier, most notably around the contest’s most explosive idea, Danielle Smith’s constitutionally-dubious Alberta Sovereignty Act.

But division and contrast is muted when it comes to how they’d handle the rising cost of living, which polls have routinely shown is the biggest issue or stress-causer among Albertans. And when it comes to managing this once-in-a-generation fiscal bounty that oil prices and production have given this province, they’re a field of truly united Conservatives.

Some key inflation relief measures were already in place before a near-failing party leadership review pushed Kenney to announce an early retirement. To blunt the impact of year-over-year inflation that’s hovered around eight per cent, the UCP government had suspended the gasoline tax and instituted rebates on electricity and natural gas bills.

What Kenney resisted doing, unlike the premiers of Saskatchewan and Quebec, was stealing a page from former premier Ralph Klein’s playbook and offering direct payments to residents. This left the opportunity for any of the candidates to offer a flashy “[Your name here] Bucks” promise, but they almost uniformly resisted the idea.

The exception is Rajan Sawhney, the former transportation minister, who proposed in early July to send every household a monthly “affordability cheque” for $75, plus extra for children and rural residents. But in the months since, she’s done little to promote this idea, which would cost more than $3 billion, if cheques flowed for a year.

Other candidates’ promises have been lower-key than that.

He’s also promised something novel for young drivers — to eliminate the final step for graduated drivers’ licences, a $150 savings, and also promised a $2,000-per-child tax credit for families.

Former Wildrose Party leader Brian Jean has pledged price-busting policies of his own, with a plan to give oil companies royalty breaks on oil made into gasoline in Alberta, and to use provincial surpluses to decrease some power bill charges.

Danielle Smith, the contest’s apparent front-runner, hasn’t formally released policy on inflation or most other fiscal matters. She’s at times suggested borrowing ideas from Toews’ and Jean’s platforms — Schulz has said she’d do the same — and has proposed modifying rules around electricity rates and transmission charges.

But here’s an indication of how Ottawa-centric Smith’s campaign has been. When asked at a Fort McMurray leadership forum how she’d combat inflation and rising grocery bills, she responded with warnings about the federal climate plan’s impact on fertilizer use — none of which has yet to take effect or even be finalized, so it wouldn’t be showing up yet in supermarket prices.

And there’s been outright unanimity among candidates on the idea that the basic income tax exemption amount should rise with the rate of inflation, though Kenney beat them all to that punch by reinstituting the “indexation” policy he’d lifted earlier in his term. The candidates have all pledged to do the same for benefit programs for disabled Albertans, seniors and others — meaning that it’s almost a shoo-in the next premier will do so.

Solidarity on the bounty

There’s similar consensus around how the leadership hopefuls would approach the new financial bounty that high oil prices have brought to the provincial treasury.

Nobody is promising any major reinvestment in programs and services — the spending restraint Kenney emphasized seems likely to remain in place. “Fiscal discipline will continue to matter,” Toews said during one leadership debate.

There’s instead a widely-shared dedication to primarily using surpluses to pay off Alberta’s debt, forecast to be down to $79.8 billion next March, off recent record highs. Eighteen years have passed since Klein waved over his head a “paid in full” sign to announce debt elimination, and keeping at bay debt interest charges remains a United Conservative goal.

But the Heritage Fund, that rainy-day provincial kitty that Klein and premiers since him have largely left to gather dust, is now in vogue again among aspiring UCP premiers. The $3-billion top-up Kenney announced is greater than any previous deposit, and each leadership candidate has proposed continuing to put part of surpluses into it.

Leela Aheer, the former culture minister, has tried to thread the needle between savings and inflation, saying she wants to invest Alberta’s growing endowment outside of the province and Canada, lest those dollars somehow add to inflation here.

Smith, meanwhile, has set sky-high goals for building up the Heritage Fund. “Let’s put it out there that we want to have a sovereign wealth fund that’s $500 billion, generating $25 billion a year so we can eliminate income tax and eliminate corporate income tax; and let’s tighten our belts now to make that happen,” she told one forum.

That’s a colossal leap, given that the provincial savings account will total around $20 billion by next March. Her belt-tightening rhetoric signals Smith’s interest in dedicating a set amount of resource revenues to the Heritage Fund; in the 1970s and early 1980s, Alberta stashed away 30 per cent, before phasing out that growth strategy.

If a Smith government did so, Alberta could have $100 billion saved by 2040, according to estimates by University of Calgary economist Trevor Tombe.

But to get to that moon-shot, a half-trillion dollars? Tombe calculates Alberta could get there in two decades, but would have to sock away half of all royalties every year, and reinvest all the interest the Heritage Fund produces.

To do so would entail keeping substantial shares of Alberta’s provincial revenues out of public services like health and education. This would translate into a much leaner present to achieve a lofty (and tax-free) future, almost certainly beyond the tenure of any next premier.

But in the shorter term, on inflation and fiscal matters, Albertans can expect some degree of predictability from the women and men who want to carry the UCP banner.