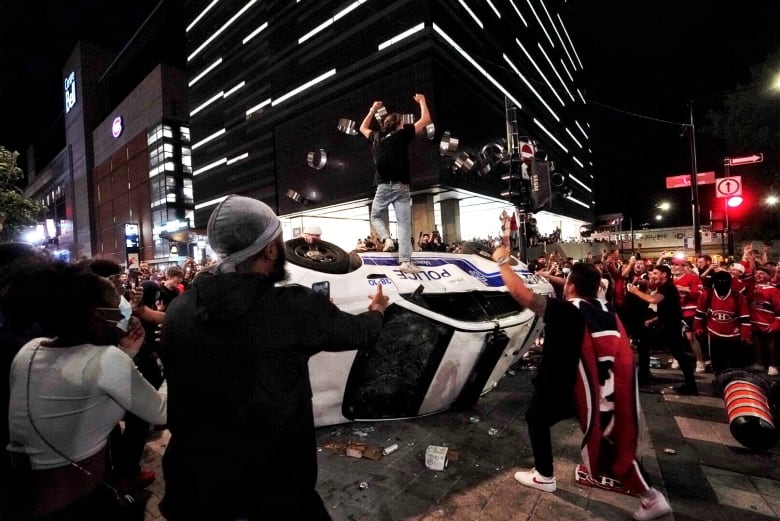 Montreal police deployed tear gas in the city’s downtown on Thursday to disperse crowds shortly after the Habs victory over the Vegas Golden Knights.

While the Bell Centre wasn’t near maximum capacity due to public health restrictions, people packed into the streets surrounding the arena.

When the puck fell inside, fans set off fireworks outside — and did so throughout the game. People were climbing on lampposts and building ledges, drinking in the streets and cheering throughout the game as police closed off a perimeter and eventually stopped letting people near the Bell Centre.

Then forward Artturi Lehkonen scored in overtime, clinching the Habs’ spot in the final for the first time since 1993.

Shortly after the winning goal, Canadiens owner Geoff Molson spoke to spectators in the Bell Centre asking them to stay indoors for their safety .

Montreal police spokesperson Const. Manuel Couture said at around 11:15 p.m. there was aggression toward police officers, with projectiles thrown toward them and at buildings.

Images captured at the scene show a police car flipped on its side with fans stomping on its doors.

Police arrested 15 people, notably for assault and mischief. At least one arrest was made for armed assault against an officer. They also issued 60 tickets to spectators for reasons such as violating municipal fireworks regulations.

This came after thousands of fans gathered on des Canadiens-de-Montréal Avenue downtown, packing it end to end. Police closed it off, not letting more people in.

When police wearing full riot gear moved in to disperse the crowds, people fanned out into downtown and gathered at places such as Ste-Catherine and Crescent streets or on René-Lévesque Boulevard.

Steven Bergeron, a fan celebrating the victory, said being tear gassed without warning took some of the joy out of the celebration for him, adding that most of the fans outside the arena were just having a good time.

“Some people were doing some bad things but everybody was just jumping and they started shooting it at us,” he said. “I thought it was another firework and I had something in my eyes but when I saw everybody start running, I knew it was the cops.”

Still, he said, watching the Canadiens win was “pretty sick.”

Canadiens assistant coach Luke Richardson opened his post-game news conference with a message to those outside the arena.

“I know it’s a little crazy outside the Bell Centre. But we hope everybody’s enjoying themselves and has a great time, and especially with Saint-Jean-Baptist Day, and it’s such a special day to celebrate. But let’s make sure we all celebrate responsibly and get home safe.”

Officials had worried about rioting

With the excitement palpable even before the game began, city officials, police and merchants were worried that, win or lose, the revelling could lead to rioting reminiscent of the 2008 playoffs.

Some downtown businesses were boarded up before nightfall to ward off looters and window-smashing revellers on Thursday as Mayor Valérie Plante called for calm.

On her Facebook page, she said Saint-Jean-Baptiste Day combined with the exciting game are “two great occasions that we will celebrate with passion, but also with respect, in order to allow all Montrealers to celebrate in safety and to avoid getting out of hand. We owe that to our merchants!”

Plante said fans could expect a strong police presence throughout the evening.

Excitement in the air

Before the match, Glenn Castanheira, general manager of Montreal’s downtown business association, said merchants are used to rough nights, and were already getting prepared for the worst before the puck was dropped.

In 2008, thousands of people rushed to the streets following the Montreal Canadiens’ seventh-game win over the Boston Bruins, which advanced Montreal to the second round of the playoffs.

But what started as a peaceful celebration quickly devolved into violence.

More than a dozen police cars were damaged that night, and officers were pelted with rocks and bottles.

Despite the skirmishes, most fans were peaceful — and stoked about the win.

Charles Turmel, also downtown, said he had been dreaming of this “awesome” moment since he was 12.

“It feels like we deserve this. The whole city is going nuts and we’re having a lot of fun,” he said.

On Twitter, Premier François Legault commented on the game throughout the evening, and after the win, he wrote, “It feels good!”