Montana Earthquake Is Felt For Hundreds Of Miles Early Thursday 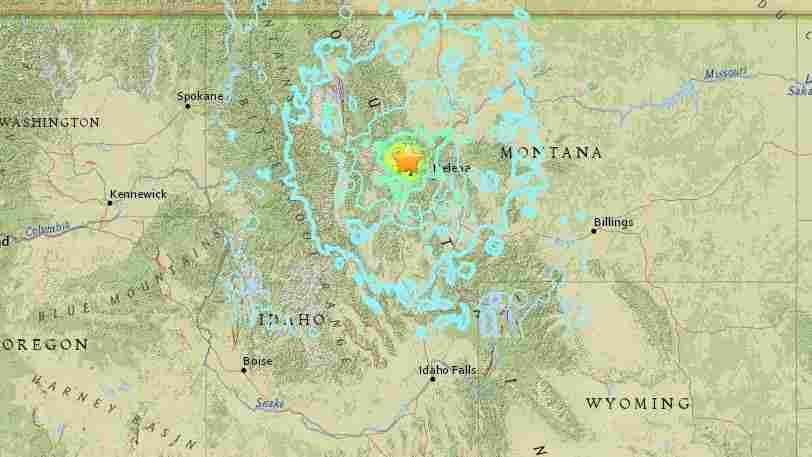 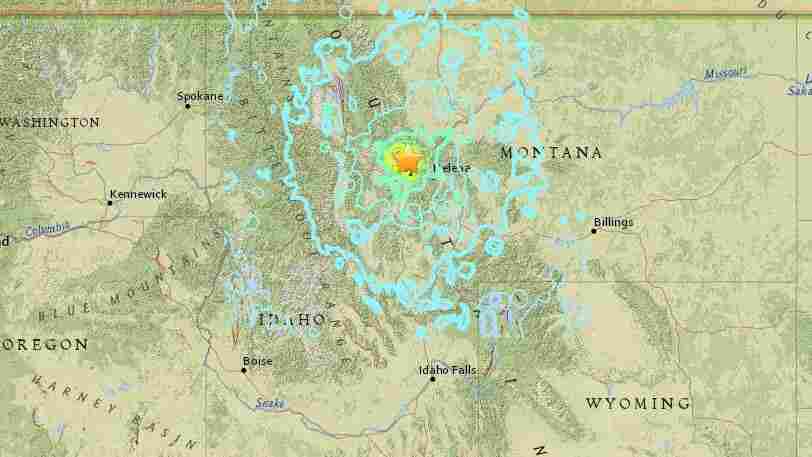 A map shows seismic activity around the site of a 5.8-magnitude earthquake that struck in western Montana early Thursday.

An earthquake with a magnitude of 5.8 startled many people out of their sleep in western Montana early Thursday. The shallow quake was felt for hundreds of miles from its epicenter southeast of Lincoln, including in parts of neighboring states and in Canada.

“We have no reports of injuries due to the earthquake at this time,” member station Montana Public Radio reports. “Shockwaves are still being felt with decreasing intensity in parts of western Montana.”

Thursday’s earthquake was the strongest to hit western Montana in years; it was slightly stronger than a 5.6 magnitude quake that hit a nearby area in July of 2005, the U.S. Geological Survey says.

Some alarmed residents said via Twitter that they woke to fears that an intruder was in their house; others said their dogs had seemed to sense the oncoming quake — and jumped on their owners to seek safety.

The dog knew it was coming. He started barking and jumped off the bed. Then the house started shaking.

“It was strong enough to wake people up across a wide area, and was felt along a line more than 500 miles long, from Billings to Spokane, Wash.,” Montana Public Radio’s Eric Whitney reports for our Newscast unit.

Residents reported waking to the sound of pans clattering around and the feeling of their houses being shaken.

“Woke me and my parakeet up,” Terry MacPheat wrote on the MPR Facebook posting about the quake, adding, “bed was shaking like something from an Excorcist movie!”

Another MPR listener, David Buckingham, reported, “I was awake here in Bozeman, sitting at my desk, when it happened; it felt like I was on a boat in choppy seas, and all the birds in my neighborhood simultaneously made a ruckus and flew away.”

At least 10 measurable temblors hit Montana from 12:30 to 1:31 a.m. Thursday, with the last two having magnitudes of 3.9 and 4.4, according to the United States Geological Survey.

The quake’s epicenter was some 230 miles from Yellowstone National Park — and because it was felt from far away, the shaking led some in the area to wonder whether the Yellowstone supervolcano was finally emerging from its slumber. But the Yellowstone Volcano Observatory’s most recent volcano alert level is listed as normal, and the park service has said that while the area normally has more than 1,000 earthquakes each year, its experts predict a large eruption “very unlikely” to strike in the next 1,000 -10,000 years.

More details about the overnight quake from the USGS:

“The location and focal mechanism solution of this earthquake are consistent with right-lateral faulting in association with faults of the Lewis and Clark line, a prominent zone of strike-slip, dip slip and oblique slip faulting trending east-southeast from northern Idaho to east of Helena, Montana, southeast of this earthquake.”