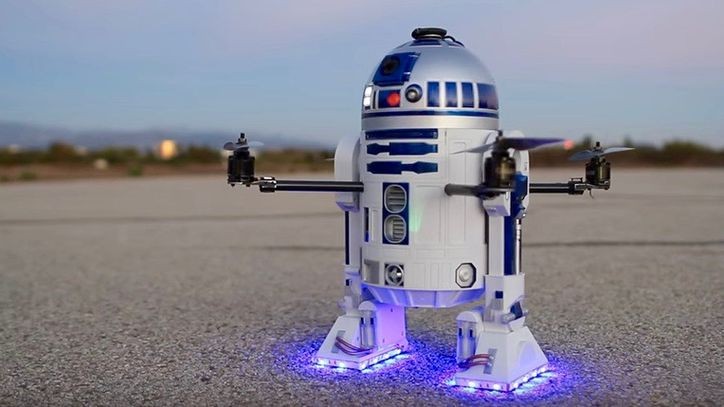 Everybody knows what a drone looks like. It has some rotors and zips through the air. What’s less common is a drone that can also hit the pavement and cruise around on wheels.

Researchers at MIT’s Computer Science and Artificial Intelligence Laboratory (CSAIL) are working on drones that can both fly and drive while navigating a city-like area. Think of it as a mini test bed for flying cars that will one day need to deal with buildings, no-fly zones, parking and other challenges in urban environments.

Wheeled vehicles are efficient, but limited in where they can go. Flying vehicles are nimble, but eat up fuel. If you can combine the two, you can get the best of both worlds. “The ability to both fly and drive is useful in environments with a lot of barriers, since you can fly over ground obstacles and drive under overhead obstacles,” says MIT Ph.D. student Brandon Araki.

The MIT system uses algorithms to figure out the most efficient pathways through a cityscape. It takes advantage of the drones’ dual abilities to get them safely to their destinations. A scaled-down, real-world model puts this all to the test, and MIT released a video on Monday showing eight of its wheeled drones in action. The system can handle up to 80 drones and will keep them from running into each other.

“While there are obviously still big challenges to scaling up to vehicles that could actually transport humans, we are inspired by the potential of a future in which flying cars could offer us fast, traffic-free transportation,” says CSAIL director Daniela Rus, one of the developers of the drone system.

The researchers released a paper detailing their work: “Multi-robot Path Planning for a Swarm of Robots that Can Both Fly and Drive.”

MIT’s experiments could one day act as the basis for a brainy future computer system that handles the flight and driving paths of multiple vehicles, whether they’re passenger-toting flying cars or autonomous delivery drones. It would sure beat sitting in traffic.

It’s Complicated: This is dating in the age of apps. Having fun yet? These stories get to the heart of the matter.

Does the Mac still matter? Apple execs tell why the MacBook Pro was over four years in the making, and why we should care.