Miss America Winner Camille Schrier: 5 Things to Know About Her 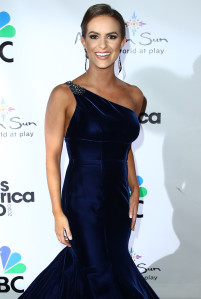 The 24-year-old Pennsylvania native secured the crown from 50 other candidates by showing she’s a self-proclaimed “woman of science.” Schrier holds undergraduate degrees in biochemistry and systems biology from Virginia Tech and is working towards a doctor of pharmacy degree at Virginia Commonwealth University. The biochemist told the crowd that she wanted to “break stereotypes about what it means to be Miss America in 2020,” which included giving a chemistry demonstration on hydrogen peroxide during the talent competition.

“I’m not the beauty queen,” Schrier said during the show. “I’m the brand ambassador for this organization and I’m more than just someone with a crown on my head.”

Last year, the Miss America Organization eliminated the swimsuit and evening gown portions of the pageant and replaced them with more time for the women to advocate for their social causes. Schrier won a $50,000 scholarship, a six-figure salary and the coveted title of Miss America.

Here are five things to know about Schrier.

1. She Battled an Eating Disorder

Schrier revealed on stage that she decided to compete in the competition after the swimsuit portion was removed. “I kind of figured that I would never get on that stage because I was a woman who did not want to get into a swimsuit on stage. And I didn’t have a performing talent, which is really ironic now,” she said.

2. She’s Passionate About Bringing an End to the Opioid Crisis in the U.S.

Schrier created Mind Your Meds: Drug Safety and Abuse Prevention from Pediatrics to Geriatrics, a drug abuse and prevention program, to raise awareness about drug interactions. She opened up on stage about her friend’s husband who became addicted to prescription opioids after a motorcycle crash.

3. She has Ehlers-Danlos Syndrome

Schrier was diagnosed with the rare condition, which affects connective tissues supporting the skin, bones and blood vessels, at age 11. She told VCU School of Pharmacy News in July that the condition “definitely got me interested in science and medicine because there’s no treatment for this right now.“ She added, “There was a lot of genetic information regarding EDS and genetics was something I was always really interested in. This was a further interest, in terms of genetics, for me to look at and think about how that could help us diagnose people.”

4. Her Science Experiment Blew Away the Competition

Schrier added potassium iodide to hydrogen peroxide, food coloring and dish soap to demonstrate the catalytic decomposition of hydrogen peroxide. The fun experiment caused colorful foam to explode out of beakers to the awe of the audience. “Don’t try this at home,” she joked about the experiment known as “Elephant’s toothpaste.”

Schrier loves showing off pictures of her two cats on her Instagram feed to her more than 14,000 followers.