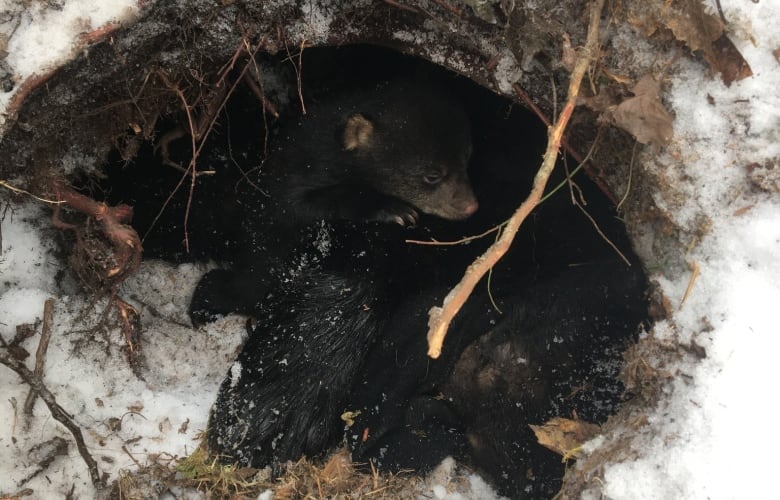 An official with the Minnesota Department of Natural Resources says he’s not sure why a black bear that’s part of a state research project made her way to Canada this winter.

But he had to ask for help from the Ontario Ministry of Northern Development, Mines, Natural Resources and Forestry to locate and check on the bear.

Andrew Tri, the Minnesota department’s bear project leader, made his way to the woods near the northwestern Ontario town of Atikokan on March 4, where he worked with natural resources staff from the region to check the bear’s GPS collar, count her cubs (she has three) and take measurements aimed at assessing her health.

“I’m a little bit jealous,” Tri said of the bear’s foray into Canada.

“I’ve been itching to cross the border and get some fishing in.”

Tri’s department has been researching the bear population since the early 1980s, he said.

Its current study explores how they’re responding to declining berry production in their habitat.

The bears seem to be doing OK, he said. But one thing their research has revealed is that the animals migrate long distances to follow food and prepare for winter hibernation.

“This bear just happened to be on a migration to the southwest, which is very similar to what other bears do,” he said. “But then she did a U-turn and decided to head for brighter pastures across the border.”

The bear was likely unaware of Canada’s entry requirements related to COVID-19 and probably did not make use of the ArriveCAN app, Tri joked.

“There’s not a whole lot of signage where she crossed,” he said.  “But certainly the television reception, [notifying] folks of those requirements is not very good in that part of Minnesota. So I’m guessing she just didn’t get the message.”

Ontario ministry staff provided the necessary anesthetic to sedate the bears, Tri said, which spared him the complicated process of arranging to bring it across the border.

Their visit to the family revealed that the bear was in relatively good condition for an animal that had been through a poor food season, he said.

Research suggests that bears follow environmental cues, such as scents, on their migration paths, he said.

The animal may have been following the scent of a Canadian bear that had crossed into the U.S. and then returned home.

If the bear chooses not to return to Minnesota in the summer or fall, Tri said, researchers will track her down once more, remove her GPS collar and “write her off as a Canadian bear.”