Millie Bright column: How England’s ‘special aura’ can help drive us to success against US 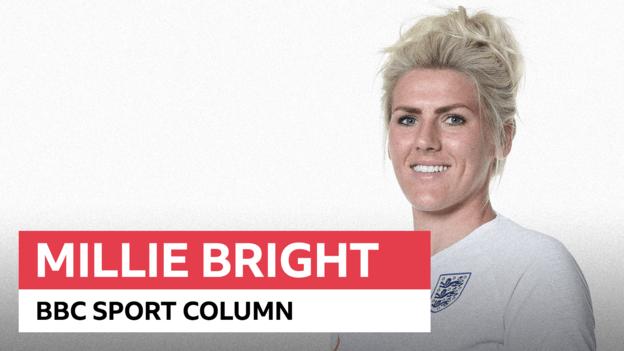 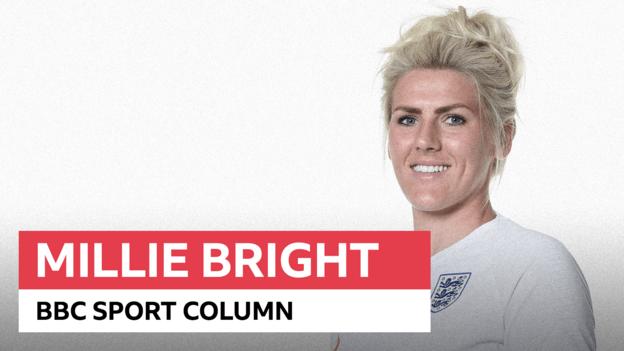 Chelsea and England defender Millie Bright will be writing columns for the BBC Sport website as the national team attempts to win this summer’s Women’s World Cup in France.

When my centre-back partner Steph Houghton cleared the ball off the line after my backpass was intercepted in the quarter-final win over Norway, I didn’t need to apologise to her.

Don’t get me wrong, it was a huge relief, especially as it came late in the game after I had been through hell in the build-up to the match with a virus.

I had been in bed suffering for two days, had barely eaten anything and only made the call to declare myself fit on the morning of the game.

The last 10 minutes were hard. I was tired and running out of energy and, despite all that, I knew that backpass wasn’t good enough by my own standards.

But Steph didn’t say a word. Why? Because no matter what happens, she has my back. We both knew that I’d made a mistake, but she didn’t feel the need to have a go at me.

She trusts and believes in me, like she does with all the England players, and I can’t tell you how much confidence that gives you.

It’s the type of bond which is hard to quantify; like an unspoken one between two sisters who would do anything for each other.

But that is the same for many relationships in our squad, and I believe that special aura in the camp can be a huge asset as we face our biggest challenge yet against the United States on Tuesday.

‘Steph is a true leader’

When I first came into the England squad Steph took me under her wing straight away and we built a friendship that has grown every year.

She’s helped me massively and understands how I work, so she is always making me smile and laugh because she knows I’m at my best when I’m happy.

She’ll also recognise when I’m going through a rough patch. She’s the first person to put her arm around me and ask if I want a quick chat.

She’s the kind of person to just read you without you needing to say anything. That’s purely because she is a great person, a superb friend and a true leader.

Even on the pitch, a gesture from her or a quick word can make you feel invincible.

I can’t think of a better professional and she is a credit to herself and her family.

We aren’t underdogs against the United States

If you’d have asked me a year ago whether we were underdogs against the US, then I might have agreed with you, but now we see ourselves as their equals.

We obviously have to respect who they are: they are the world’s number one team and are the reigning world champions, but as always the focus is on what we can do and as long as we deliver, then I know we can go on and win the game.

The US like to be bold in their statements and there’s a lot of noise around this game, but we prefer to stay humble and do our talking on the pitch.

Beating Norway was our most dominant performance of the tournament, but we all know we weren’t at our best and have another gear or two to find.

We aren’t listening to the noise outside our bubble and, although Phil Neville has said losing in the semi-finals would be seen as failure, I only think this is because we have such high expectations.

I wasn’t in the team when England lost in the semi-final to Japan four years ago, but I did play when we were also beaten by hosts the Netherlands at the same stage of Euro 2017.

Some people are asking if it’s third time lucky, but we are a completely different team to the one I was involved in two years ago in the way we play, the personnel, the manager and the mentality we have.

What being a ‘bad-ass woman’ means to me

Phil Neville has spoken about us being “bad-ass women”, and I agree with that 100%.

His definition might be different to mine, but to me it shows we are strong, determined, we never give in, but we are humble and ready to make strides in women’s football.

That phrase came up when we set our targets last year.

There have been a lot of changes to the team since we played in Euro 2017, so we wanted to build on the success we had before, start a new chapter and make sure that we are the most together team around.

We’ve learned a lot of lessons.

We also wanted to make it clear that any new players coming into the squad understood what playing in this group should mean.

For us, winning the World Cup is not enough. If you come into the squad, you are not just here for the moment but you’re building that legacy for the next generation.

There is something special about this group of players, a bond and a spirit which isn’t forced, and I don’t think we’ve ever been in a better position to succeed.

You can see it when the team scores and all the substitutes are out of their seats celebrating like mad. No matter if they are playing or not, they are just so happy for the squad and the team.

And it’s why I would have sacrificed my place against Norway if I knew I couldn’t make it through the game. I wouldn’t have jeopardised the team’s chances, I have too much respect for them.