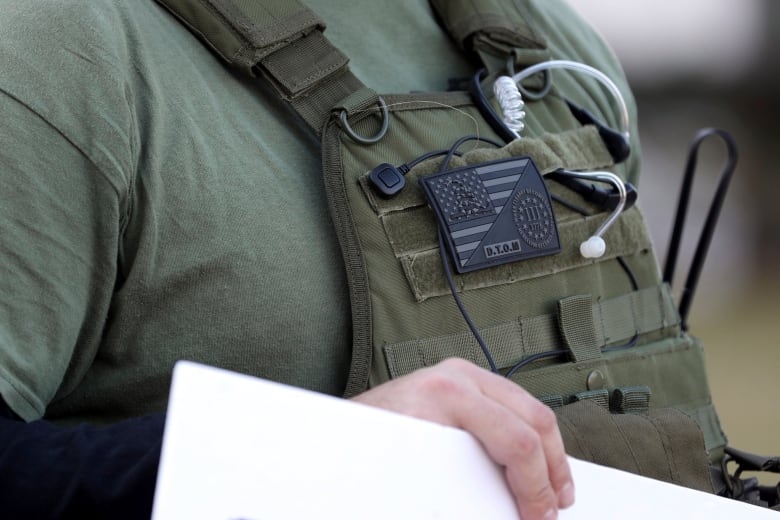 Military officials said they believed a Canadian reservist was more prominent in, and more deeply involved with, a now-banned right-wing organization than initial reports suggested — an assessment that senior intelligence officials appear to have kept from the leadership of the Ranger unit where Erik Myggland served until this past spring — CBC News has learned.

Documents obtained under access to information law show senior Canadian military defence security officials believed Myggland was a regional leader of the Three Percent movement — a survivalists’ organization with roots in the United States which was added last week to Canada’s list of terrorist groups.

“It has been identified that Pte. Erik Myggland was the President/Commanding officer of the III% BC/Yukon Chapter and he had extensive involvement with a Right Wing Extremist (RWE) organization known as Soldiers of Odin (SOO),” says an email written to the commanding officer of the 4th Canadian Ranger Patrol Group by its Edmonton headquarters on Aug. 25, 2020.

“Both of these organizations are known to actively recruit CAF members.”

That email was sent the same day that CBC News published a report uncovering Myggland’s affiliation with both the Three Percent movement and the Soldiers of Odin, a white supremacist organization that originated in Europe. Myggland was released from the military back in March.

The email from the Ranger unit’s immediate headquarters at 3rd Canadian Division in Edmonton was part of an email chain that started with the Department of National Defence’s director general of defence security in Ottawa.

The director general had access to both intelligence warnings from members of the Five Eyes intelligence-sharing alliance (Canada, the U.S., the U.K., Australia and New Zealand) and the findings of a Canadian military counterintelligence investigation into the activities of Myggland and his now-ex-wife, Jodi, who was also a Ranger and briefly a member of the Three Percent movement.

CBC News received almost three dozen pages under the access to information law, including a chronology and summaries of the couple’s activities. Almost all of the content was redacted.

The documents appear to have formed the basis of what the leadership of the Ranger unit was told as Myggland’s affiliations and online posts — including one reference to Prime Minister Justin Trudeau as a “treasonous bastard” — were being made public in the CBC News story.

The extent of Myggland’s involvement with right-wing extremism seems to have caught the Ranger unit’s commander, Lt.-Col. Russ Meades, by surprise.

“This information would have been useful a year or more ago,” Meades wrote in response to the director general of security.

Documents released previously to CBC News under access to information law show that the Canadian military’s counterintelligence branch was aware of Myggland’s alleged activities after being tipped off in 2017 by a specialized unit of the municipal police service in London, Ont. Defence sources said Five Eyes intelligence-sharing partners simultaneously raised red flags about the Ranger.

An investigation was conducted and an interview, facilitated by Meades, was carried out with Myggland by military counterintelligence officers.

Myggland said he did nothing wrong

In an interview last fall with his hometown newspaper, The Rocky Mountain Goat, Myggland denied any wrongdoing, claimed he was no longer a member of either group and said he left them when he recognized their racist and anti-government overtones.

He refused to speak with CBC News, saying its coverage of his case was biased, and did not answer another, recent email request for comment.

He was released from the military in March after a protracted battle with DND over how his departure would be characterized. In the interview with Valemount, B.C. publication, he said he didn’t mind being let go from the military but objected to the suggestion that it was related to racist activity.

The Canadian Army and the leadership of 4CRPG have been criticized by human rights groups for not moving more swiftly to remove him once it was revealed he was under investigation.

The documents released to CBC News raise fresh concerns for anti-hate advocates, who have questioned the decisions made by military intelligence in this case.

Commander should have been told sooner: Balgord

The depth and extent of Myggland’s affiliation with the Three Percent movement “should have been shared” at the outset with the commanding officer of the Ranger group, said Evan Balgord, executive director of the Canadian Anti-Hate Network.

“The president is actively responsible for recruiting new members into the hate group, so that’s something the commanding officer certainly should know,” he said.

The army conducted a special investigation into concerns about possible right-wing extremist influence in 4 CRPG. The actions of counterintelligence officials have not been given the same level of scrutiny — at least publicly.

Asked last fall whether the intelligence branch should have been more forthcoming in the case, Lt.-Gen. Wayne Eyre, the acting chief of the defence staff, said the the activities of counterintelligence officers — whose duties include monitoring internal threats to the Armed Forces — are not within the scope of the army.

A defence source with knowledge of the file said this week that Eyre — who was army commander when the Myggland story emerged — did subsequently meet with senior defence intelligence officers to argue for more transparency.

There should be a review of what the intelligence branch knew and when, and what actions it took, Balgord said.

He said he was genuinely startled to see that Myggland may have held a key regional post in the survivalist movement — which had members in the United States who have been accused of taking part in the Jan. 6, 2021 Capitol Hill riots in Washington.

“We had thought, and he had certainly tried to give the impression, that he was just a member or some kind of associate without a deep involvement, and now it appears that wasn’t true,” said Balgord. “The fact the [B.C./Yukon] president was there and had the potential to recruit others is pretty troubling.”

He said the army should take another look at the Valemount, B.C. patrol to assure itself that no recruiting activity took place.

The army’s investigation concluded that the leadership of 4 CRPG did not deal with the Myggland case proactively.

Copies of the investigation’s final report (written last November) and previous drafts of the report were obtained by CBC News under access to information laws.

The different drafts show a gradual softening of the report’s tone, which could reflect the degree to which 4 CRPG leadership may have been kept in the dark by military counterintelligence.

The Oct. 30, 2020 version of the investigation report states that “the investigative team found the 4 CRPG leadership had been permissive of hateful conduct in the cases of CRs Erik Myggland and Jodi Myggland.”

That reference was deleted from the final version of the report.