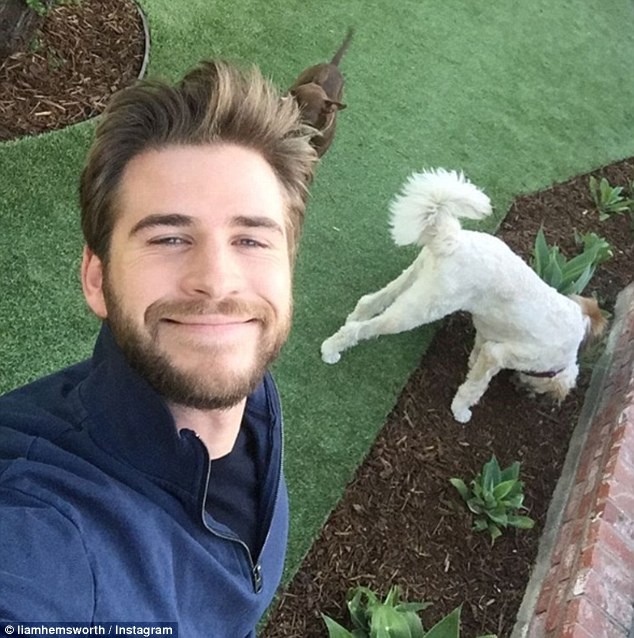 Talk about a cozy lazy Sunday!

Earlier today, Miley Cyrus shared a sweet Instagram message with her main man Liam Hemsworth (who appears to be away right now) from the comfort of her bed. The “We Can’t Stop” singer posted the three images on social media, which featured the sleepy star cuddling with their labradoodle pup Dora, who was named after the Nickelodeon show.

Along with the too-cute images, the 24-year-old wrote, “We miss you @liamhemsworth!” She also added, “(Dora’s morning yawns are more like ROARS).”

An hour before Miley penned her affectionate post, Liam hopped on Instagram and shared an image of himself and the pup with the caption, “#thuglife.” Miley commented, “Lucky to have you [fuzzy] babies to cuddle” and then posted her message back to her long-term love.

Back in 2015, Miley helped the Aussie actor adopt Dora from Wylder’s Holistic Pet Center and Rescue in L.A.’s Studio City neighborhood. The two took to social media during the outing and their posts ignited rumors that the two had rekindled their broken romance, which turned out to be true.

Since reconciling after their famous split in 2013, the two stars, who try to keep their high-profile romance under the radar, have been going strong . The pair got engaged again in early 2016 but have yet to walk down the aisle.

Earlier this year, Miley told Billboard that their broken engagement four years earlier was for the best because it made them a better pairing now.

“I needed to change so much. And changing with someone else not changing like that is too hard,” she says. “Suddenly you’re like, ‘I don’t recognize you anymore.’ We had to re-fall for each other.”

We’d miss Liam too if we were Miley!

Check our their storied romance in pictures…