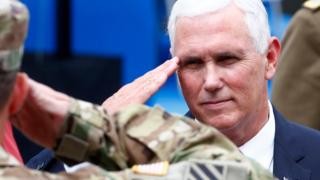 US Vice-President Mike Pence has said that no threat is bigger to the three Baltic states than that posed by their “unpredictable neighbour”, in a reference to Russia.

In Estonia, he said Russia continued to “seek to redraw international borders by force” and divide European nations.

The remarks come amid tensions as Russia orders a cut in US diplomatic staff numbers.

The move was in retaliation for new US sanctions against Russia.

After meeting the presidents of Estonia, Latvia and Lithuania, all Nato members, Mr Pence said that the message of President Donald Trump to the countries was: “We are with you.”

“A strong and united Nato is more necessary today than at any point since the collapse of communism a quarter-century ago,” he said at a news conference in the Estonian capital, Tallinn.

“And no threat looms larger in the Baltic states than the spectre of aggression from your unpredictable neighbour to the east.”

He reaffirmed the US commitment to the security of the countries as Russia prepares to hold large-scale military exercises with its ally Belarus in the next month.

Analysis: Carving out an uncertain path

Russia’s decision to significantly reduce the number of US diplomatic staff marks the end of any immediate hope for a fresh start between Moscow and Washington. Indeed, it could usher in a new and uncertain period of competition between the two capitals.

Mr Putin appears to have misjudged what was on offer. Relying upon clear signals from the Trump campaign that a reset in the US relationship was both possible and desirable, Moscow intruded into the US campaign to an extent which US intelligence agencies believe was unprecedented.

Quite how far Russia intruded into the US campaign in actually backing candidate Trump is currently under investigation and this, of course, provides an important element of the backdrop to the worsening diplomatic relationship.

Mr Pence also warned that Russia continued to “seek to redraw international borders by force, undermine democracies of sovereign nations and divide the free nations of Europe, one against another”.

His visit to the region comes as Moscow announced that 755 staff must leave US diplomatic missions in Russia, in retaliation to new sanctions imposed for Russia’s annexation of Crimea in 2014 and Russian interference in the US election.

Reacting to the move, Mr Pence said: “We hope for better days, for better relations with Russia.”

“Recent diplomatic action taken by Moscow will not deter the commitment of the United States of America to our security, the security of our allies.”