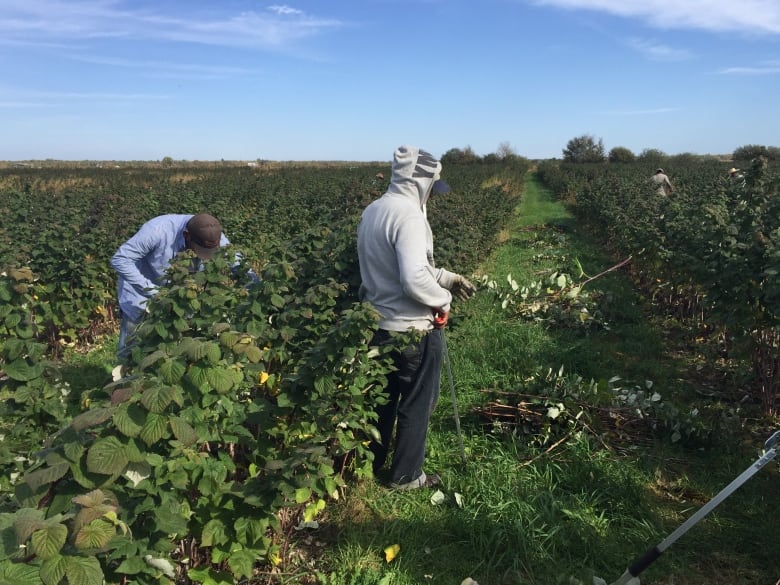 Temporary foreign workers at Krazy Cherry Fruit Co. in Oliver, B.C., claim the living and working conditions on the farm are putting them at risk of COVID-19 transmission.

Four people connected to the farm have tested positive for the virus. Interior Health declared an outbreak on July 13, issuing an order stopping 36 migrant workers and nine additional individuals on the farm from leaving the property. Farm work is allowed to continue.

A video shot by a Krazy Cherry migrant worker shows housing conditions on the farm. CBC has agreed not to name the man who fears being identified will affect his job status.

The footage starts in a bedroom shared by four men, while the videographer talks about proximity to a bed used by a COVID-19 stricken worker who is now in isolation.

Video taken by a migrant worker shows the living conditions at Krazy Cherry Fruit Co., in Oliver B.C. where there is an outbreak of COVID-19. 2:49

“Here are the black bags the co-worker left because he became infected,” he says in Spanish. “So barely a metre from [another bed]. It’s hard to believe we just keep living here.”

Walls made of blankets, shortage of food

The video goes on to show blankets hung to separate one bedroom from another.

The video continues to a near-empty fridge. Workers say they have not been able to leave the farm to shop for food, since the health authority issued the order.

The worker shooting the video says they asked for a food delivery two days earlier but nothing had yet arrived.

“As you can see we don’t have fresh food,” he says. “A few days ago we told the boss. Two days ago, we made a list and up until now he still hasn’t brought it.”

According to Krazy Cherry operations manager Harman Bahniwal, food was delivered in a timely manner.

“There were no complaints that came to our attention or to the attention of the authorities,” he said.

Bahniwal did not address questions about living and working conditions on the farm.

CBC also spoke with a Krazy Cherry migrant worker who is in isolation after contracting COVID-19. CBC is not naming the man because he fears it could affect his job status.

He said there was no chance to physically distance while working in the company’s packing plant in Oliver.

“We work very closely together when packing food,” he said through a translator.

The worker also said he felt like he was being “hidden” by a farm manager after being diagnosed with COVID-19, first left to wait alone in a parking lot for 90 minutes and then put into isolation in a trailer that he had to clean himself.

“My boss was not kind,” he said. “He seemed annoyed about bringing me food. And he kept yelling at me to clean the trailer, as if I didn’t know that I had to do so.”

“It seemed as if my boss did not want the other workers to know that I was in the trailer and in this situation,” he said.

The worker says an official from Interior Health had him moved to a motel the next day.

Bahniwal said Krazy Cherry is taking “every precaution to mitigate any risk to our employees, their families and the public.”

“We have been working very closely with [Interior Health] and the Ministry of Agriculture and have been fully co-operative and complying to all the requests and procedures that have been implemented.”

On Friday, Provincial Health Officer Dr. Bonnie Henry said that two of the cases at Krazy Cherry were temporary foreign workers, while the other two were members of the family that owned the farm.

She said public health teams are doing “extensive” testing and screening at the farm and supporting the staff and the farm family.

She said the Krazy Cherry outbreak is connected to the cluster of cases in Kelowna.