MFM FC not burning out, promises to win next match 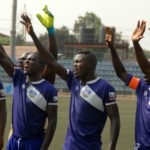 After a 1-3 thumping by Makurdi-based Lobi Stars, MFM FC has promised victory in its next match against Shooting Stars of Ibadan in the Nigerian Professional Football League (NPFL).

The Team’s Media Officer, Olawale Quadri said the team had not burnt out, promising a rejuvenated side in the Ibadan encounter.

MFM had failed to sustain the tempo of the first stanza of the league when it recorded a massive 10 wins, and six losses putting them second on the log.

The high-flying MFM had however managed only one win in four league matches since the beginning of the second stanza of the league.

Quadri told the News Agency of Nigeria (NAN) on Thursday that the team had put the last defeats behind them.

“It’s not true that we are burning out; we remain committed to our goal of achieving at least a continental ticket. We need to put the sorry loss behind us.

“We are doing our best so as not to disappoint our fans.

“We are assuring our fans that they should expect nothing but a victory comes Sunday,’’ he said.

MFM opened its campaign in the second stanza of the 2016/2017 with a scoreless encounter with Akwa-United FC at Agege Stadium, followed by a 0-3 loss to Niger Tornadoes.

The Olukoya Boys got back to winning ways in the Match Day 22 fixtures through a hard fought slim 1-0 win over FC Ifeanyi Uba at Agege stadium.

The Southwest derby between the duos had been in favour of Shooting Star with a win recorded in both previous meeting that ended 2-1.

Shooting Stars on its part has had only one win in their last five league matches.

The Fatai Amao-tutored team lost 2-0 to FC Ifeanyi Uba in Nnewi in their last match of the first stanza and surprisingly recorded 0-3 loss in the reverse fixture at home.

The Ibadan-based team continued the downward trend with a 0-3 whitewash in the hands of Lobi Stars in Makurdi, followed by Match Day 22 hard fought 1-0 victory over Sunshine Stars.

The Oluyole Warriors then played a pulsating 0-0 match against visiting Kano Pillars at the Adamasigba stadium in the Mid-week Match Day 23 fixtures.

Shooting Stars are currently battling relegation, second from the drop zone with 26 points from 23 league duel and a paltry six win, eight draws and nine losses.