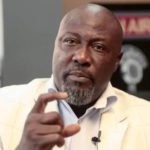 He urged the Senate to ask the Federal Government to make such pronouncement because of breakdown of law and order in Kogi.

According to Melaye, there is a total breakdown of law and order in the state following the alleged mayhem unleashed on him and his supporters on Monday.

He claimed that three people were killed in the fracas.

The senator said, “On Monday l left my village and arrived at Lokoja in the company of Directorate of Security Service (DSS)  and the police. When I arrived at Lokoja, I phoned the state Director of DSS that I have an intelligence that the governor brought in assassins to kill me and the DSS Director provided a truck of DSS men to accompany me.

“I also called the commissioner of police and we were half way talking and the line went off and I put a call to the deputy commissioner of police in charge of criminal department and I told him that I am in town and I have few places to go to and I want to also go to the federal medical centre to pay the bills of indigent civil servants who, because the governor has not paid their salaries for 15 months are unable to pay their bills and some of them need surgical operation. So I was going there to offset the bills of as many of them as I can. The police commissioner in Lokoja provided me with additional trucks of policemen.

“The combined detachment of police and DSS accompanied me to Kogi State Polytechnic where I addressed the crowd.

“I just finished addressing the crowd, I got off the rostrum and opened my car to go in and I saw some young men from the other side firing sporadically. I ran into my bulletproof jeep and I saw one particular killer who is notorious and was reported in Kogi State as a murderer. In fact he beheaded somebody in Okene for that reason he was brought to Abuja and spent months in the police custody in Abuja and was just released few weeks ago. This particular criminal was the one that faced my car and opened fire on my car and fortunately he was hitting a bulletproof vehicle and l was inside.

“Mr. President this is a second attempted assassination attack on my person.

“Mr. President, I seek your indulgence to read section 307 of the constitution as amended.

“The President shall have the power to issue proclamation of state of emergency in Kogi State. There is actual breakdown of law and order and public safety in the state.

“My President I am going to seek the leave of the Senate to bring in proper motion to ask for the declaration of a state of emergency in Kogi State. As I speak to you, Kogi State is no longer passable since governor Bello became governor of the state. Kidnappings are going on daily basis and insecurity is also on the increase.”