Meet the Mi’kmaw artist revamping Charlottetown intersection where a bronze John A. Macdonald once sat 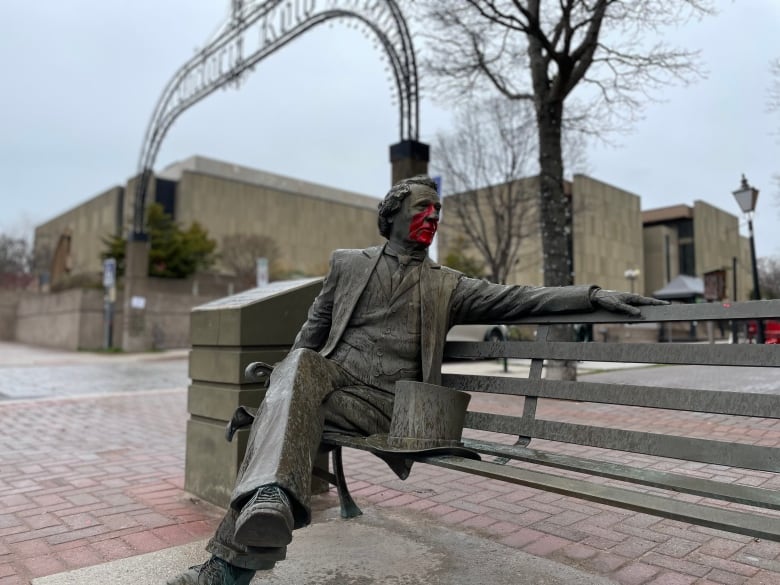 Melissa Peter-Paul could never stop on the busy Charlottetown corner where a statue of Canada’s first prime minister, whose government oversaw the establishment of a formalized residential school system, stood until recently.

As a Mi’kmaw woman, it was too painful — a reminder of what was celebrated in that spot and all over a city labelled the “birthplace of Confederation.”

“Now those feelings are changing,” she said on a sunny day while facing the now vacant spot at the intersection of Richard and Queen streets where the bronze statue of John A. Macdonald sitting on a bench used to be.

“The statue is not there anymore, and, you know, Mi’kmaw art is going to be celebrated here, and Mi’kmaw pride.”

The city council had initially voted to keep the statue last year and then to make modifications in May, but it was removed at the start of June after the initial discovery of an estimated 200 potential burial sites on the grounds of a former residential school in Kamloops, B.C.

Peter-Paul was selected by the City of Charlottetown to design a crosswalk for pedestrians crossing Richmond Street that would continue down Queen — between the Guild venue and the new library being constructed in the Dominion building.

“I’ve always wanted to be a part of revitalization of Mi’kmaw art here in the city,” Peter-Paul said.

“I’ve been doing art since I was little, but it’s been so important to me to make sure there was more Mi’kmaw art here in the city, because it was lacking that for a long time.”

Officials with the city say the project is in its early stages, but Peter-Paul’s plan is to create a design using the Mi’kmaw curve. Though the symbol can have many meanings, for Peter-Paul it represents strength, community, balance and standing together.

“It’s such an important symbol to the Mi’kmaq, my people, you know; it represents us … it’s kind of like the heart of our culture and who we are. It just has so much meaning and I want all of the Indigenous people, the Mi’kmaq people, to feel, you know, that they’re welcome here,” she said.

“They’re honoured here, rather than that statue that was sitting there.”

Art as ‘our way of life’

Peter-Paul was born on the Island and is a member of the Abegweit First Nation. She moved around the region — Mi’gma’gi — with her mother while she was completing her education.

She’s been back in P.E.I. for 14 years and works as a full-time artist while also staying home to support her two sons, 14-year-old Owen and four-year-old Gesik, who are both on the spectrum for autism.

Peter-Paul has been doing quill work for seven years, like her great-great grandmother before her, but is now branching off into other mediums. She works with porcupine quills, birch bark, sweetgrass and spruce root.

“All of these materials are from the land and I harvest all of them,” she said. “My boys have always seen me doing art.”

Her boys are used to being around her work, leaving her material and beadwork undisturbed. She remembers when she was pregnant with her youngest and he’d be kicking the table through her stomach while she tried to work.

“It was just so special, and so now my boys, they see me out harvesting and they see me plucking porcupines and they know that’s just our way of life, and it’s so normal for them,” she said.

“I hope it’s the same way for my grandchildren, you know, keeping that art, and that culture and that tradition strong, because, you know, I had to break cycles that were introduced to us. Every single day, I wake up and I have to think about that break in that cycle.”

Though Peter-Paul is not descended from residential school survivors, her parents and grandparents attended Indian Day School — which has had an impact, and spurred the need for healing within her family.

Whatever [Macdonald] tried to do, we’re still here, so that’s the point of my art being here.— Melissa Peter-Paul

“My father actually moved here about seven years ago to help me with my children … he’s a huge role in the upbringing of my children, and that’s so important to have grandparents involved,” she said.

“When they don’t have that other parent, they kind of take on that role. I’m so grateful to have my dad here close by.”

Her father is Junior Peter-Paul from the Elsipogtog First Nation in New Brunswick and is an active elder, drummer and sunrise ceremony performer on the Island.

“He plays a huge role in our lives now, and that’s really important, but that’s some of the impacts of residential schools and Indian day schools, those unhealthy patterns that were instilled in us, [and] I’m very grateful that I have my art and the strength that comes from it,” she said.

‘We have more history here’

Peter-Paul’s crosswalk is expected to be installed in the coming weeks, once the design is complete and a stencil is produced. It’s a moment she’s looking forward to and wants to see other Indigenous artists have in the future.

“We have more history here, you know? We have more stories; we have more traditions,” she said. “And, you know, we have so many good things about our art and our culture that can be shared. And what that statue did was the total opposite.

“It’s never going to erase it, you know; we’re always going to have the impacts of it in our people. But you know, there’s so much more that we can celebrate.”

She hopes her art will be that symbol of celebration to Islanders and tourists alike.

“Whatever he tried to do, we’re still here, so that’s the point of my art being here,” she said.

“To look at, to honour, to remember.”