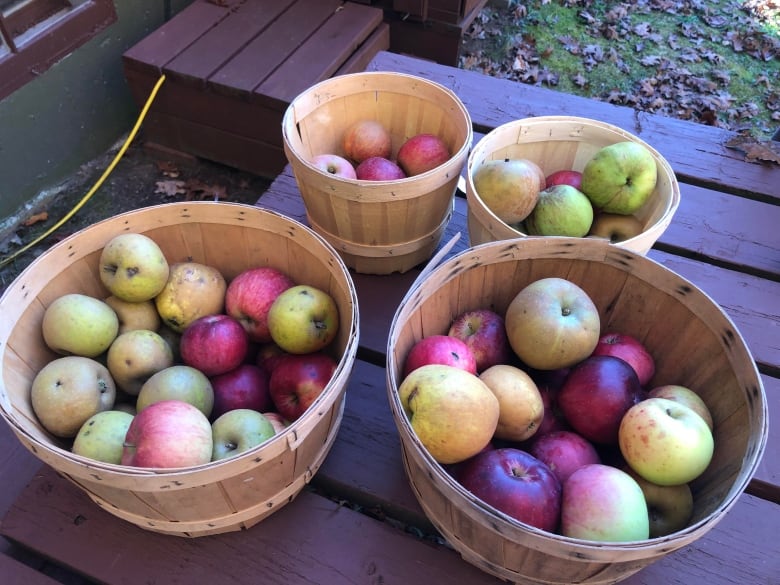 Take a stroll through Daryl Hunter’s apple orchard and you stroll through history — along an ancient Roman road, through the court of King Louis XIII of France, to the Niagara Peninsula home of Laura Secord, heroine of the War of 1812.

In some places in his orchard, you’ll get a lot of this history from a single tree.

Hunter has 150 varieties of apples, including 100 considered historical and often growing next to each other on different branches of the same tree.

Hunter began collecting apple varieties when orchards in the apple-rich Keswick Valley were disappearing. More than 200 hectares (500 acres) in the community west of Fredericton were devoted to apple trees in the 1970s.

Now there are fewer than 40.

Efforts are being made to revive the industry, but even Hunter, who’s done so much to preserve the apple varieties of the past, is thinking of giving up soon. He says he’s getting old.

Since the ’70s, he’s collected pieces of trees from around the world. He places a piece of the tree onto the stem, root or branch of another tree, a process called grafting.

“It’s kind of like immortality; the tree hasn’t died,” he said. “It might’ve died there, but I got a piece off it to keep it going.”

Because the trees are grafted, they produce different types of apples on a single tree.

Hunter, who has collected pieces of trees from former orchards on Keswick Ridge, said many of the trees from the area are “dead and gone.”

“So I’m keeping them alive on my trees,” he said.

The apples found on Dary Hunter’s property are ancient history – literally. Some of the varieties he grows in his hobby orchard date back to the era of King Louis XIII in the 1600s. Here’s how he’s reviving the apple varieties of the past. 3:54

Apples a ‘form of candy’

Hunter is part of the North American Fruit Explorers, a non-profit group that focuses on the discovery and cultivation of varieties of fruits. He has collected pieces of apple trees from across North America and as far away as France.

“The objective I had originally was to try to preserve some of the historic varieties of apples that you can’t get anymore,” he said.

One such variety is the Tolman Sweet, prized for being both sweet and dry.

Back in the 1800s, that combination was perfect for cutting into apple rings, which would then be hung on a string to dry.

The result, Hunter said, “was a form of candy.”

Then there’s the vitamin-packed Ribston Pippin, an apple from England that was first introduced in 1688.

“It’s got about five times the Vitamin C in it that a McIntosh does,” Hunter said.

Another variety is the little, red-cheeked Lady Apple, the “after-dinner mint” of the 1600s.

“The ladies of the French court would carry them in their purses and use them as breath fresheners” after dinner, he said.

Also known as Pomme d’Api, it’s named after the Roman Appian Way, the first and most famous of the Roman roads.

The apple ripens in late November and was used as a Christmas apple in France, Hunter said.

There’s also the Swazi Russet, a small apple that derives from the russet family. Hunter said he was able to get pieces of the Swazi Russet tree from Laura Secord’s property in Ontario.

But his favourite is the Sandow apple, which sweetens over time.

According to Nick Brown, a spokesperson for the province’s Department of Agriculture, grafting is typically done at tree nurseries.

“It is a technical process and requires experience and knowledge for success. It takes a specialized skill set to do well commercially and time to learn the details and the art to do it proficiently.”

Brown said grafting is an effective method for reproducing plants with “similar and desired characteristics.”

“Specialized amateur growers, collectors and plant breeders also use grafting to [create] unique trees with several varieties,” he said in an email.

He noted the method can also be used to re-graft or change varieties in an existing orchard into a new variety.

David Coburn of Coburn Farms, a sixth-generation farmer on Keswick Ridge, remembers when dozens of tractors filled with apples would line up outside the Keswick Ridge Apple Co-op Ltd. in the 1970s.

The apples would eventually be sold in supermarkets and warehouses across the province.

“It would be nothing to see several wagonloads of apples go up by the farm,” he said. “It was everybody bringing in the harvest.”

In those days, homemakers would also pick apples on the farm to help pad their families’ winter pantry shelves and Christmas shopping budgets.

As more and more women shifted into the workforce, farms had to “change up who does our apple harvesting,” he said.

“People don’t make jams and jellies anymore, so we have to adjust to society.”

And with the effects of climate change, the high costs of farming and more real estate taking over, he said, the apple business has dwindled on Keswick Ridge.

Even the way houses are built now has impacted the apple industry, Coburn said.

Andrew Lovell, owner of River View Orchards in Keswick Ridge, said the apple industry will keep growing as long as there are young people to take it over.

Lovell bought his farm on Keswick Ridge in 2012 and has about 10 hectares of trees.

Lovell, the former president of the New Brunswick Apple Growers Association, says both his son and daughter want to take over the farm.

Lovell said producers also need to work together to export their products around the world.

“Our industry is growing, and it’s going to continue to grow as long as we provide markets for our product,” he said.

“You can’t do that as just a Keswick Ridge grower.”