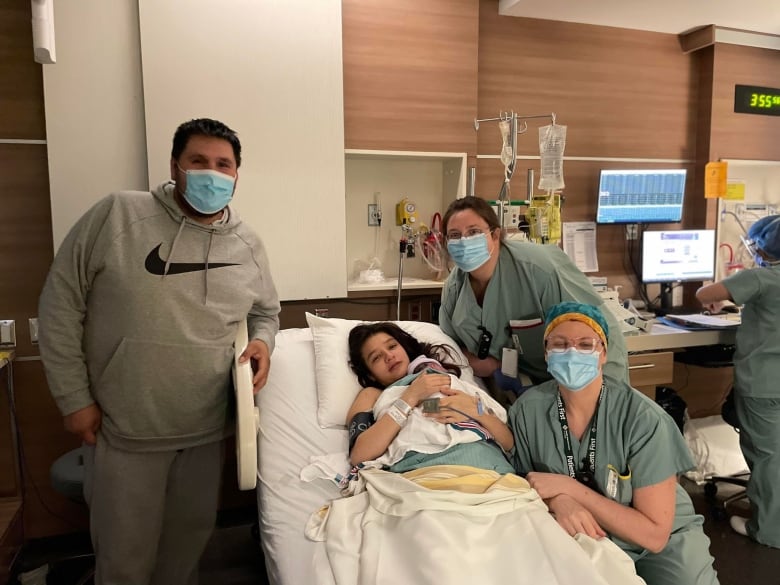 A couple from Fisher River undertook an arduous journey through a blizzard, stopping at three hospitals before arriving at HSC Women’s Hospital in Winnipeg, where they welcomed their baby girl, Alexzandrea April Stormi Sinclair on Saturday morning.

The journey started Wednesday night as Shaina Maytwayashing was preparing a meal for her three young children.

“It was unexpected,” she said. “I didn’t know that I was in labour, I thought it was maybe just her kicking around,” whose new daughter wasn’t due for another two weeks.

“But no, she sure wanted to come out so we called the ambulance.”

“She’s very beautiful, she’s got some curly hair and she’s very pink. She’s very wide-eyed, and she’s very healthy. I’ll probably be writing up a story to tell her when she’s older, because that was quite the April storm she went through, that’s why we named her April Stormi.” – Shaina Maytwayashing

The couple first ended up at Arborg Hospital, but the facility wasn’t equipped with a maternity unit.

The couple was transferred to Gimli, a trip that would normally take about an hour, but white-out conditions made the timeframe twice as long.

“The ambulance was in front at first, but they started fishtailing, and we noticed that, so I just jumped in front of the ambulance,” said Dellon Sinclair, the newborn’s father.

“I told the paramedics that ‘I’ll just bust a trail for you guys,’ so we could get Shaina there safely, as fast as we can.”

Once in Selkirk, the couple was told they still had time to get to a hospital with a maternity ward, suggesting HSC Women’s Hospital in Winnipeg.

Unfortunately, ambulances in Selkirk were stuck at the time and unable to help with the transfer.

“I just told the doctors, ‘Cool, I have a truck and we came this far already, and so I think we can take her the rest of the way,'” Sinclair recalled.

Once the couple was out on the highway, they encountered a snowplow and followed it.

“It’s a lucky, lucky couple of hours there,” Sinclair said. “They cleared a path for us to get from Selkirk.

“It was really intense, really nerve wracking … especially being in active labour, riding around with your unborn baby,” Maytwayashing said. “It’s scary.”

At 3:36 a.m. on Saturday, the infant was born, arriving a little over two weeks before her due date.

“I’ll probably be writing up a story to tell her when she’s older, because that was quite the April storm she went through, that’s why we named her April Stormi.”

The couple says they received a lot of help from people on Facebook during the trek.

“All the doctors everywhere we went were excited for us, because they were all watching Facebook for the arrival,” Sinclair said.

They launched a Facebook page for Baby Stormi to keep everyone updated on her arrival.