‘Meant to be’: How this WW II veteran cheated death 4 times to find love 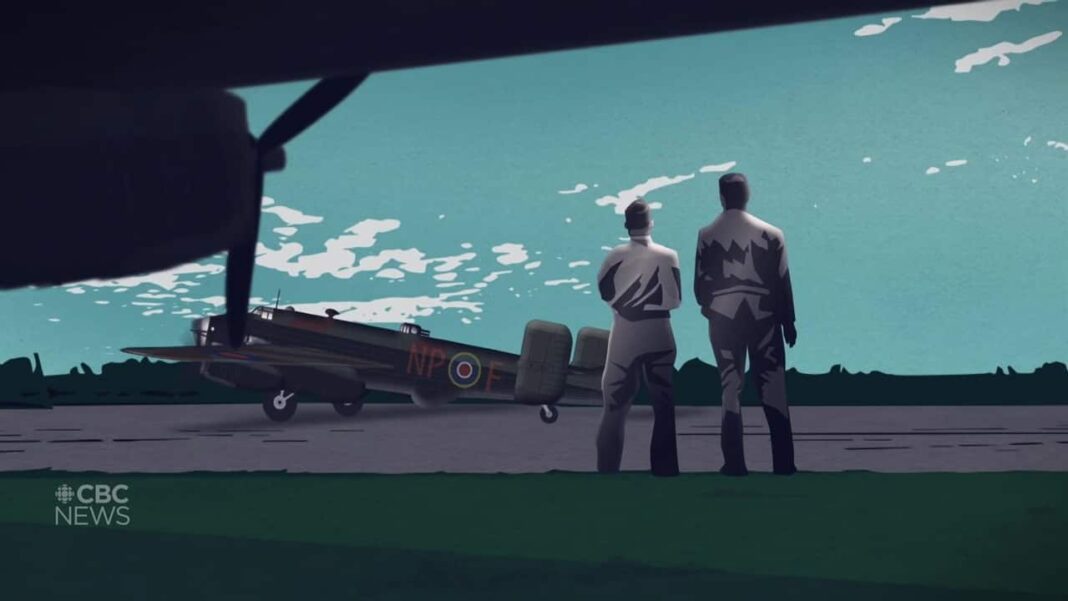 Reg Harrison slides his leather wallet out of his pocket and removes a weathered black-and-white photo of a beautiful woman.

But the Second World War veteran, often called Crash, wasn’t the first bomber pilot to carry the woman’s photo in his wallet, or to ask her to marry him.

Harrison’s love story is one of loss and luck.

When the war began in 1939, Harrison was a 17-year-old farm boy in southeastern Saskatchewan who spent his days plowing his parents’ fields behind a team of horses. He would often stand in the dirt, amid billows of dust and swarms of grasshoppers, and watch air force training flights roar overhead.

“I never really wanted to be a farmer. The excitement of being up in the air and flying — I think that was uppermost in my mind,” he said. 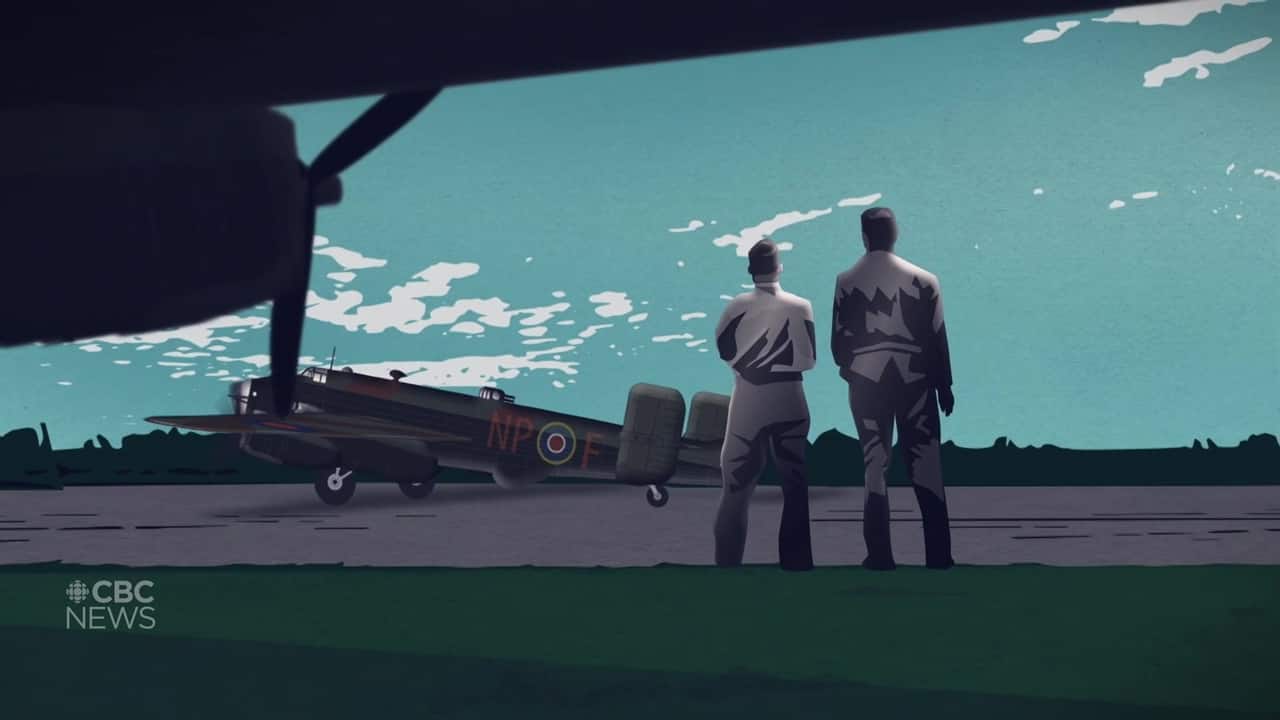 Second World War veteran Reg Harrison says his love story was “meant to be”. He survived four plane crashes in 1944 and returned home to find love with the fiancée of his best friend, who had died in the war. He shares his story of loss, luck, and love in this video animated by Steven Silcox and produced by Bonnie Allen. 7:29

So, Harrison joined the Royal Canadian Air Force in 1941 and began pre-enlistment school in Regina. That’s where he became fast friends with Donaldson Rendal Holloway, known by all as Buddy, from Ottawa.

“He really stood out. I always felt a little bit inferior to him. He was taller than me, a lot more good looking, but we got along really well,” Harrison said.

Buddy would often write letters to his fiancée, Jean Woods, back home in Ottawa, and he would always invite Harrison to add a note at the end.

“He’d say, ‘Harry, put a footnote on this letter.’ And I’d always say, ‘But I don’t know Jean,'” Harrison remembers.

And, every time, Buddy would give the same reply: “You never know. Someday, you might meet her.”

Harrison remembers asking his friend what Jean looked like. Buddy pulled out his wallet and showed him a picture.

“All I remember is she was a good-looking gal,” Harrison said with a chuckle.

The two friends did most of their flight training together and earned their wings on the same day in April 1943. They boarded the same ship in Halifax to head overseas. The pilots completed advanced flying school in Warwickshire, U.K., then prepared to part ways.

Again, Buddy invited Harrison to put a footnote on a letter to his fiancée with the usual saying: “You never know, you might meet her.”

A month later, Harrison was in his first plane crash.

Like most rookies, he had to complete a training flight with an experienced crew before he could pilot his own team. Unbeknownst to the crew, on March 5, 1944, there was a 500-pound bomb stuck in the plane’s bomb bay when they landed.

Just as the pilot turned off the runway, the bomb dropped and blew the plane apart.

“I was sort of temporarily knocked out and when I came to, there would soon be a wall of fire and I picked myself up off the ground and started to run,” Harrison said.

He spent 10 weeks in hospital having skin grafts to treat phosphorus burns.

When Harrison got back to base, he received a message that his friend Buddy had also crashed in a training flight. Buddy was killed instantly.

So, for the first time, Harrison wrote his own letter to Jean. He said he was sorry to hear about Buddy’s death, and if he survived, he would stop and see her in Ottawa.

On his 13th bombing mission, Harrison’s engine failed on take-off. The bomber veered off the runway, loaded with bombs, and crashed into a stone wall. Harrison was knocked out.

“They found me out lying on the wing. So then I spent about 10 days in hospital. I had a broken nose and 30 or 40 stitches,” Harrison said.

After surviving two crashes, Harrison had earned the nickname Crash. No one could have predicted that he would do it twice more.

In August 1944, his crew got caught up in the air on a stormy night and had to abandon their aircraft, which was running low on fuel, and parachute to safety. Then, three months later, they got peppered by friendly fire and had to make a crash landing on one wheel.

“My squadron commander said to me, ‘Well, Crash, you’ve cheated the Grim Reaper four times.… I’ve got a feeling that you’re not going to be lucky a fifth time.'”

It was time for Harrison to go home to Canada.

“I never looked on myself as a hero; I just looked at myself as being darn lucky that my number wasn’t up,” he said.

He arrived by ship at Lachine, Que., and phoned Jean. She wasn’t home and her sister answered the phone. Harrison chickened out. He said he didn’t have time to visit.

“I was a bit hesitant to stop because I didn’t really know what to say to Jean,” he said.

He hung up the phone.

“Then, some little voice said to me, ‘You know, Harrison, that’s pretty selfish of you. You’ve survived four plane crashes. Your good friend, Buddy, gets killed in the first crash, and the least you can do is go and see her.”

So he called back — this time speaking to Jean — and said he would stop in Ottawa, after all.

On a cold afternoon in January 1945, he arrived at the train station in Ottawa. It was jammed with hundreds of people greeting returning airmen. When the crowd finally thinned out, Harrison could see two women holding a photograph. It was Jean and her sister.

“I liked her as soon as I saw her,” Harrison said, beaming. “She was a beautiful, caring person.”

He planned to only stay for two days, but he stuck around for four. Then, that summer, he went back to see Jean for another 10 days.

He wanted to marry her, but hesitated to ask.

“I used to compare myself to Buddy. I think I had the feeling that I couldn’t fill his shoes,” he said. “I didn’t think that I could be the same type of a husband that Buddy would have been had he lived.”

Eventually, Harrison worked up the courage to propose. She said, “Yes.”

The two got married just before Christmas in 1946 and spent the next 43 years together.

Jean always wore two engagement rings, one from Buddy and one from Harrison, until she died from a heart attack in 1990.

He misses Jean, who filled his life with laughter, family, friends, faith, and “good cooking.” She was famous for her Saskatoon berry pie.

The 98-year-old man often thinks about how lucky he was to survive the war, to have such a good friend in Buddy, and to meet the love of his life.

“I often wondered if my good friend, Buddy, if he had a premonition he wasn’t going to come back because he was so emphatic when he’d say ‘You never know, someday you might meet her.'”