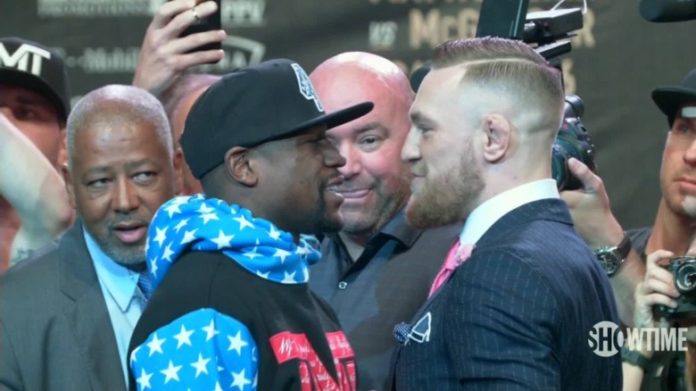 LAS VEGAS — As he held a cup of Irish whisky in his right hand and adjusted his tailored suit with his left hand, Conor McGregor looked over at Floyd Mayweather and smiled.

One of the greatest boxers of all time and the biggest star in mixed martial arts had returned to the ring an hour after their much-publicized boxing match for a postfight news conference, and McGregor couldn’t help but ignore the trash-talking that had become such a driving force behind their unlikely pairing.

That’s exactly what Saturday’s fight between Mayweather and McGregor was. It was fun.

Conor McGregor lost his fight against Floyd Mayweather, but still had something to celebrate: It was an entertaining bout. Ethan Miller/Getty Images

In a sport where massively hyped fights are often massive letdowns, this was what we thought — or at least hoped — it could be, given the disparity in boxing experience between the two. McGregor went toe to toe with Mayweather through nine rounds, arguably claiming four early rounds, before becoming fatigued in the 10th when referee Robert Byrd stopped the fight.

When it was over, Mayweather announced his retirement from boxing with a 50-0 record while McGregor plotted his next move, which could include a much-anticipated trilogy match in the UFC against Nate Diaz. As far as crossover promotions go, everyone involved seemed content to move on from Mayweather-McGregor and call it a “one-and-done” event.

“I don’t even want to talk about my other guys in a boxing match,” UFC president Dana White said after the fight. “This was built from the bottom up, from the fans to the media and then up to us when we even started remotely considering something like this. It was just a real special event, and a rare event. I’m not looking to do this again.”

It makes sense for White to say that. It’s in his best interest for McGregor, his biggest star, to return to the Octagon and not think about boxing anymore. Unfortunately for White it’s going to be nearly impossible for McGregor to do that when the final numbers are tallied and he walks away with $100 million after headlining what could go down as the biggest combat sports event ever in terms of pay-per-view (estimated 4.7 million buys) and live gate numbers (estimated $80 million).

Mayweather-McGregor happened because there was too much money involved for it not to happen, and the truth is there’s too much money on the table for other crossover fights not to happen in the future. It’s like having a blockbuster summer action film that’s a major box office success. It’s not going to win any awards but it’s going to make a ton of money and chances are sequels and copycat films aren’t far behind.

Here are five possible crossover fights we could see in the near future after the financial success of Mayweather-McGregor last week.

Yes, Mayweather said he is retired for good but we’ve heard him say that before more than once. You know what else he said after the fight on Saturday? “If I see an opportunity to make $300 million or $350 million in 36 minutes, why not?” That sounds logic and the only way for Mayweather, who turns 41 in February, to make that kind of money one more time in his life is to have a rematch with McGregor.

A rematch would not have been feasible if Mayweather had knocked out McGregor within the first few rounds as many thought he might. But they actually had an entertaining fight that many thought ended too soon when the referee stopped it in the 10th round.

If you were scripting a feud with legs, the start of the rivalry actually couldn’t have been laid out any better for a rematch with the underdog never getting knocked down or quitting before losing thanks to a questionable decision from the referee.

“I really wish he let it go,” McGregor said after the fight. “I thought it was close. I get a little wobbly when I’m fatigued, similar to the Diaz 2 fight. That’s exactly what it was — fatigue. That’s why I thought the ref could have let it go a little longer. Let me go down. Let the man put me down. Wobbly or fatigued, that’s energy, that’s not damage. I’m clear-headed… Where was the final two rounds? Let me walk back to my corner and compose myself.”

Conor McGregor have some success against Floyd Mayweather in the first three rounds of the fight. ESPN Stats & Information

McGregor could easily play up the fact the referee stopped the fight too early and the judges were out to get him when he looked at some questionable scores in the early rounds. He could say he nearly went the distance with Mayweather in his first professional boxing match and now knows what it takes to beat him the second time around.

It likely won’t happen but if it did it would once again be a top three event in terms of pay-per-view and live gate figures and there’s no other match-up out there that you can say that about right now.

Manny Pacquiao, right, who lost a decision to Floyd Mayweather in 2015, could get a good final payday in a fight with Conor McGregor. Al Bello/Getty Images

They’re smart businessmen. They see the goldmine that McGregor is as a boxer, even if he fought his first professional boxing match on Saturday. A fight between McGregor and either Pacquiao or Alvarez would likely do around 2 million pay-per-view buys; making it one of the five biggest pay-per-view events ever. The fight would represent one last major payday for Pacquiao, who turns 39 in December, before he retires or help Canelo, who just turned 27, not only get a massive payday but also help him become more of a mainstream star to casual fans.

The promotional tour would likely center on McGregor and White talking trash with Arum or De Lay Hoya. Both boxing promoters were very critical of Mayweather-McGregor and White in particular. White called out Arum and De La Hoya several times leading up to the Mayweather-McGregor fight in a war of words that got ugly at times. McGregor had some choice words for De La Hoya when asked about him after Saturday’s fight.

The reason McGregor dominates the top of this list is because he represents over one million pay-per-view buys. There’s no one currently in boxing or MMA that can essentially guarantee that with just their name on the marquee. Alvarez is close but he needs a name opponent to crack that number. McGregor’s last five fights have done over 1.2 million buys.

Maligaggi is a former two-weight world champion but he’s not a pay-per-view fighter. He headlined cards on cable and has been on the undercard of pay-per-view fights but he’s a retired fighter who’s turning 37 in November and was 4-4 in his last eight fights before calling it a career earlier this year.

The potential draw here is the beef between McGregor and Malignaggi after McGregor’s camp leaked videos and photos of McGregor knocking down Malignaggi and having his way with him during a sparring session. Malignaggi took offense, left his camp and called McGregor a variety of derogatory names. Some wondered if Malignaggi was spying on McGregor on behalf of his friend Mayweather.

It looked like McGregor and Malignaggi were already angling for a future fight during the arrivals for Mayweather-McGregor last week as the two conveniently got into it in front of the media.

A fight between Anthony Joshua and Stipe Miocic will pair the two world champions for boxing and MMA respectively. Andrew Couldridge/Panoramic/Icon Sportswire

The impact of the success Mayweather-McGregor had is unmistakable. Many boxers and mixed martial artists are now trying to figure out which crossover fight they could possibly book that would land them a big pay day and crossover appeal. UFC heavyweight champion Stipe Miocic has already called his shot and publically challenged Anthony Joshua, the unified heavyweight champion in boxing, on social media.

Miocic has challenged Joshua on Instagram and Twitter and discussed why he wants to step into the ring with Joshua on TMZ.

Heavyweight fights aren’t what they used to be but this would be a unique crossover fight because you would be getting the current undisputed heavyweight champions from boxing and MMA in the ring whereas with many of these other matches one side is either retired or past their prime.

Jon Jones vs. Brock Lesnar at WrestleMania? Why not? ESPN Stats & Information

A fight between UFC light heavyweight champion Jon Jones and former UFC and WWE heavyweight champion Brock Lesnar seemed like it was a lock for 2018 after Jones challenged Lesnar last month after beating Daniel Cormier to win the title. That was, of course, before it was revealed last week that Jones failed a drug test ahead of his fight with Cormier at UFC 214. If Jones is found guilty of taking steroids and is suspended for 2-4 years his dream match with Lesnar won’t take place in the Octagon. Not only would Jones’ UFC career be in jeopardy but Lesnar turned 40 last month and has been in just one UFC fight since 2011 and hasn’t had a recognized victory in the Octagon in more than seven years.

Of course, that doesn’t mean the two couldn’t get into a WWE ring and potentially headline WrestleMania but that wouldn’t have the same drawing or earning power as a legitimate fight on pay-per-view. Either way, what McGregor was able to do last week with Mayweather has changed the way fighters and promoters view crossover fights.

“Conor McGregor has been a tremendous inspiration to me,” Jones said last month after defeating Cormier. “He has shown me, someone who has been in the upper echelon of the sport for many years now — that these huge paydays are possible. I never thought in my time as a champion that I would see fighters making $100 million or whatever he’s making in this Mayweather fight. It’s been an inspiration that you can do it.”