Mayor bans celebration of Valentine’s Day, especially among students and in school environments, says it is not an Indonesian culture 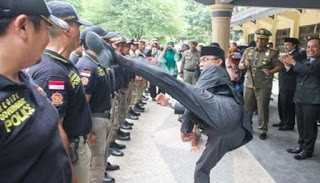 Mayor bans celebration of Valentine’s Day, especially among students and in school environments, says it is not an Indonesian culture

The Mayor of Mataram, West Nusa Tenggara Barat, Indonesia has banned the celebration of Valentine’s Day in the city.

He said that it is not an Indonesian culture that needs to be preserved.

“Valentine’s celebration is not our culture,. That’s why we strictly forbid its celebration—especially among students and in school environments,” Mataram Mayor Ahyar Abduh said on Monday, Feb. 12.

“The city government will issue a circular like in previous years to be distributed to all parts of the society,” the mayor added.

The Mayor had even asked the Education Board to urge students to focus more on school studies.

Mataram’s Education Board’s chief Sudenom said the ban has been disseminated since the start of February—not just to students but also to parents.
Students who “violate” the ban, he said will be given sanctions.

He didn’t elaborate on what they are, but said that can take the form of social punishments—by announcing the names of the violators during schools’ morning assembly.

As for students who celebrate Valentine’s Day outside of school hours, he said that it is fully their parents’ responsibility.

“We hope that parents can be on the same page with us and forbid their children from celebrating Valentine’s Day,” Sudenom said.