‘May you die in pain’: Another GOP lawmaker grilled at health-care town hall 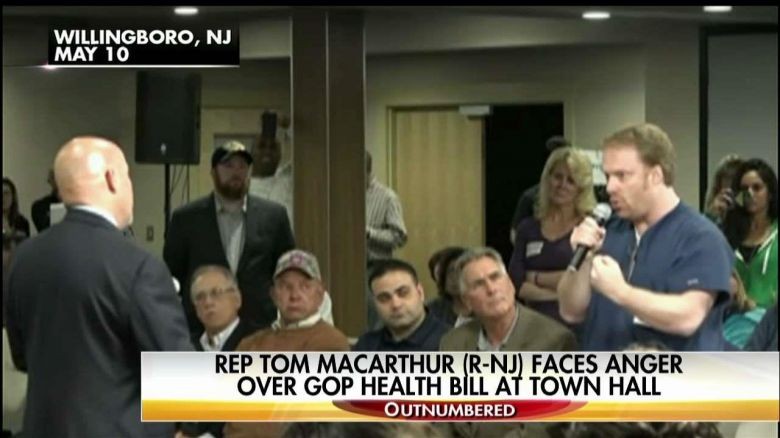 Like other Republican lawmakers before him, Rep. Doug LaMalfa (Calif.) held a town hall on the ongoing health-care debate and the effort, led by President Trump and the GOP, to repeal and replace the Affordable Care Act.

And like some of his colleagues, LaMalfa was met with boos, catcalls and verbal barbs shouted from the 400-person-strong audience at the Chico Elks Lodge in Northern California, recorded on video and audio by North State Public Radio.

It was the most recent of a declining number of health-care-focused town hall meetings charged by emotional pleas and debates between constituents and their representatives, meetings that have sparked anxiety among GOP lawmakers heading home to face tough questions.

The audience was armed with blunt questions, harsh comments and red placards they used to signal their disapproval of audience queries or LaMalfa’s responses. Green cards were used to show approval.

LaMalfa saw his fair share of red over his responses. He did not help himself, occasionally veering into sarcasm over concerns ranging from health care to climate change.

[To hold a town hall or not? It’s a lose-lose situation for many Republicans right now.]

Out of a sea of moments threatening to boil over, one stood out as particularly tense.

“I think that your vote to throw 22 million people off of health is reprehensible and in the service of the rich,” a resident told LaMalfa on his efforts to defund Planned Parenthood.

“I hope you suffer the same painful fate as those millions that you have voted to remove health care from. May you die in pain,” he added.

The comments drew a stream of groans from the audience in a rare moment of sympathy for LaMalfa.

“We pray for our constituents too, sir,” LaMalfa, who took office in 2013, quickly countered.

Once dotted on Republican lawmakers’ schedules early in the Trump administration, town halls in VFW halls, rotary clubs and school gyms have become flash points of partisan politics, where local activists marshaled opposition against conservative leaders in the months leading up to July’s vote, when the Senate rejected a partial repeal of Obamacare.

Town halls have become a damned-if-you-do, damned-if-you-don’t situation for GOP lawmakers hoping to sell their message to voters, some in reliably red districts where constituents have used new health-care laws to their advantage, such as receiving coverage for preexisting conditions.

Some lawmakers have refused to hold the meetings. Others have prescreened participants in the hopes of excluding activists who do not live in their districts. That decision has drawn fire.

“Even when you had the conservative outrage over Obamacare, I don’t recall anyone trying to preselect attendance. The unwillingness to take criticism or any heat from a legislative decision is really unusual,” Norm Ornstein, a congressional ethics expert, told The Washington Post in May.

Videos and tweets from events have gone viral, prompting Congress to slow the pace of town halls in recent months. Over the July 4 recess, only three GOP senators announced decisions to hold town halls. Sens. Ted Cruz (Tex.), Jerry Moran (Kan.) and Bill Cassidy (La.) all voiced concern over the health-care bill. Only Cassidy broke ranks to vote against the full repeal-and-replace measure.

LaMalfa’s district is comfortably red. He cruised to his last victory by 15 percentage points, and Trump soundly defeated Hillary Clinton in the presidential election there. And for his part, LaMalfa has held other town halls recently, with one each in March and April, according to the Los Angeles Times. LaMalfa spokesman Parker Williams told The Post that he plans to hold more town halls “in the coming weeks and months.”

“I think things went about as well as could be expected, given the high emotions in our country at present,” Williams said, calling the town hall a “largely cordial and productive conversation.”

Monday’s meeting might be a test case in how to manage a crowd. As the audience appeared to get agitated during LaMalfa’s meandering explanation of Medicaid costs, he stopped to address the civility of the participants.

“I’ve got the mic, folks, okay? If we want to have a positive interaction, if you want to do any more of these, then we need to have –” LaMalfa said, before being cut off by boos, hisses and laughter among audience members who appeared to take his tone as a condescending lecture. Scores of red cards waved back and forth.

A Chico woman who identified herself as Barbara Richman told LaMalfa that 50 years ago, she could see uninterrupted views of Mount Shasta, a towering nearby volcano buttressed by glaciers. Those views are now filled with haze, she said.

“Unlike what you have said, mankind is playing some role in this,” she said.

“Indeed, mankind is preventing forest management that keeps our forests from burning.”

He barely finished the sentence. Boos erupted, and red cards shot up.

A Republican senator defended Betsy DeVos at a town hall. Boos drowned her out.