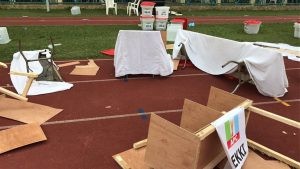 The fiasco that marred the process of the Local Council primaries in Lagos State has left the All Progressives Congress (APC) in a more confused state.

The party leadership is yet to get the way forward on the selection of candidates who will fly the its flag in the July 22 LGA elections.

The APC told Channels Television on Sunday that it has not yet resolved the next step of action, after angry delegates disrupted the primaries in protest of what they claimed was imposition of candidates.

Some of the delegates insisted on voting and disagreed with the move by the election committee to declare some local government seats unopposed.

The Chairman of the committee, Senator Tokunbo Afikuyomi, who was attacked on Saturday, was however whisked away safely from the venue.

The speculations by some of the leaders of the party are that the process might be canceled and a fresh primaries conducted, or the results might be announced.

The APC has until the June 14, 2017 to submit the names of its candidates to the State Electoral Commission, based on the calendar of the electoral umpire.