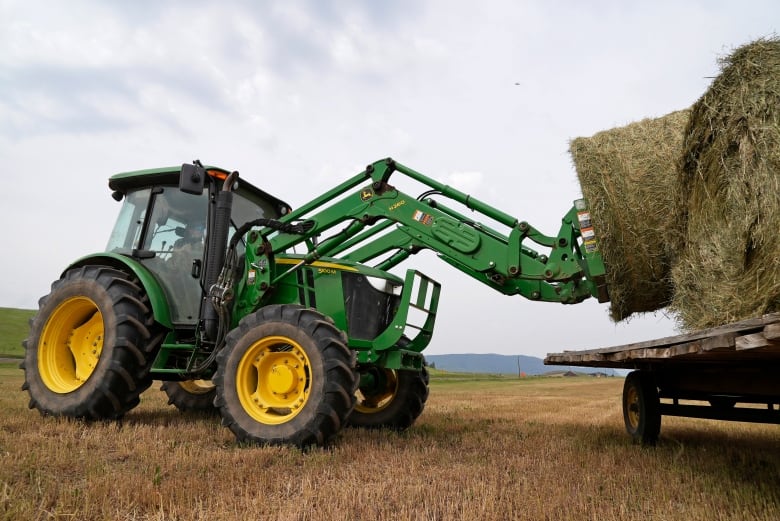 Hay from the Maritimes could make its way to the Prairies later this week as livestock producers in Western Canada struggle with devastating drought conditions.

The Canadian Federation of Agriculture (CFA) announced last week that it has started work to facilitate a initiative coined “Hay West,” that will see surplus hay from farmers in eastern Canada sent west — where dire hay and feed shortages loom.

Tim Marsh, president of the Nova Scotia Federation of Agriculture, said farmers in his province have extra and want to help out.

“We will do what we can,” he told CBC News on Friday. “I mean, that’s the sentiment I’m getting from some producers.”

Drought conditions and hot weather from Manitoba to British Columbia have left pastures and hay crops parched and dugouts for water for cattle dried up. What has grown has been decimated by grasshoppers in parts of Manitoba and Saskatchewan.

There are additional fears the conditions this summer are an early indiction of how climate change could affect the livelihood and future of agriculture in the country.

Marsh said alfalfa and other crops have boomed this year in Nova Scotia, with some producers now getting into a third cut of their fields. Marsh said producers in the province usually average two cuts per season.

Some may even have enough by the fall to cut and bale fields a fourth time, he said.

“There’s producers that are saying, that would say leave a third cut in the fields,” Marsh said. “They don’t need it, but they’ll go and harvest it if it can be a benefit to our fellow farmers out west.”

“We recognize that there are producers in parts of Manitoba that are having to sell their cattle because they have no feed and shortage of water,” said Campbell, the president of Keystone Agriculture Producers. “So there are desperate situations and [people] having to make some very, very difficult decisions.

“So hopefully this initiative will be beneficial to some individuals.”

It’s not the first time hay has been moved between regions.

A feed-sharing initiative was drafted in 2002 when Prairie farmers were facing similar circumstances, the CFA said. Ten years later, the situation was reversed when parts of eastern Canada were faced with drought.

“I do remember going to the nearest rail siding and unloading the bales into a truck and then hauling them home and putting them in the loft so that we would have winter feed supply,” said Campbell, recalling past initiatives.

“I think it’s quite a community of agricultural producers that recognize some that are in need and some that are in some difficult positions … we help one another out when and where we can.”

Marsh said it remains to be seen how much hay can be shipped west from Nova Scotia.

“We’re hoping to line up some large transport trucks to hopefully start rolling here in the next week or two from the Maritime region,” he said.

Marsh added that hay from Nova Scotia, Prince Edward Island and New Brunswick could soon be on the way.

“It’s just a matter of starting to get some of that coordination in place.” he said.

Marsh said it remains to be seen who will pick up the tab for the transport, which he said could be pricey. He said the CFA has asked the federal government to cover costs.

CBC News requested information on Hay West from the federal government on Friday, but has yet to receive a response.

However, the federal agriculture ministry announced hours before the election was called on Sunday that AgriRecovery relief programs will be funded with up to $500 million dollars to help farmers in Western Canada cope.

WATCH | Prairie farmers could be dealing with the worst drought in Canadian history:

Prairie farmers are experiencing what is shaping up to be the worst drought in Canadian history. Lack of rain, coupled with heat and wind, has resulted in the worst yield these farmers have ever seen. Some say they’re resilient enough to overcome this, but the effects of widespread droughts are being felt across the global food chain. 2:04

“We’re not going to save every animal, we’re not even thinking we’re going to be the panacea for Manitoba’s forage needs,” said Marsh. “[But] if we can help somebody and help a few farmers maintain, then that’s what we’re going to do.”

Campbell said he will be eagerly awaiting more details on the initiative. He said farmers in Manitoba are facing unimaginable stress and loss.

“There is not very much forage production around here,” he said. “You just can’t go 10 miles and get another load of hay.

“So [we are] certainly appreciative of the generosity of the producers in regions that have excess hay.”

The CFA said in a release that it is also looking to work with the railways and the government to help farmers that are in dire need of feed. It said more information will be released when details are firmed up.