Wowplus
Home World News US News March for Our Lives: The moments that made up a movement 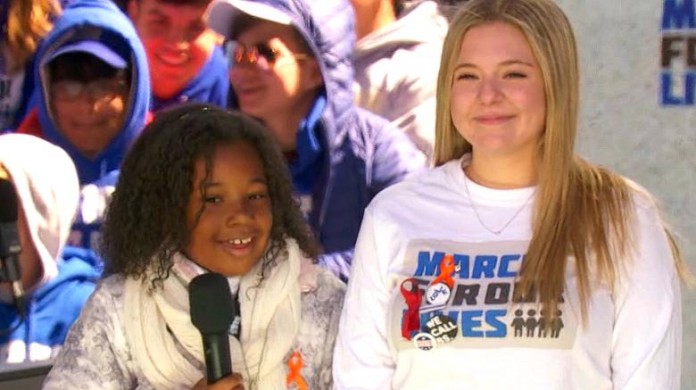 March for Our Lives: The moments that made up a movement

Thousands of students, teachers and other concerned citizens descended on the capital Saturday carrying signs and wearing symbolic price tags to say “enough” to gun violence.

Many of the speakers at the March for Our Lives rally were students propelled into the debate over gun laws when a 19-year-old with a semi-automatic rifle mowed down their classmates and teachers last month at Marjory Stoneman Douglas High School in Parkland, Florida.
The student activists in Washington were buoyed by a massive crowd, and knowing there were more than 800 planned sister marches in the United States and in major cities around the world.
The Parkland kids implored people to register to vote. They pleaded with the adults — the lawmakers — to take care of children.
“We will not stop,” one student said as rally leaders thanked the crowd after the event filled with speeches and performance by celebrity singers. “We are magic. We are power.”
Here’s what you may have missed at the marches.
The marches, in pictures 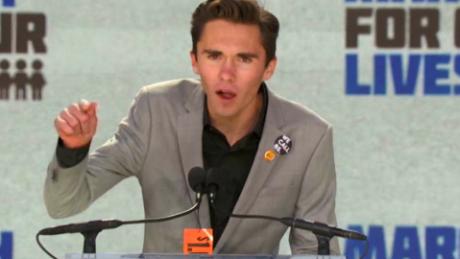 David Hogg: The people in power are shaking 01:36
Parkland activists said they know their predominantly white faces help them get more attention.
“My school is about 25% black, but the way we’re covered doesn’t reflect that,” Marjory Stoneman Douglas High School student David Hogg said the night before.
Saturday, several of the young speakers used their time to share the stage with people of color to remind people that gun violence affects all races.
“We recognize that Parkland received more attention because of its affluence,” Jaclyn Corin, a survivor of the Parkland shooting, said in her speech. “But we share this stage today and forever with those communities who have always stared down the barrel of a gun.”

MLK’s granddaughter shared her own dream 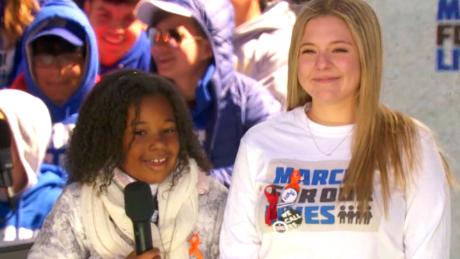 MLK Jr.’s granddaughter surprises rally crowd 02:10
Not far from where her legendary grandfather told the world he dreamed his children would be judged by the content of their character and not skin color, 9-year-old Yolanda Renee King told the DC crowd she dreams of “a gun-free world, period.”
As one student walked to the rally he said he was heartened to know Martin Luther King Jr. marched the same streets, calling for cultural change.

Nausea couldn’t stop a Parkland student from speaking up 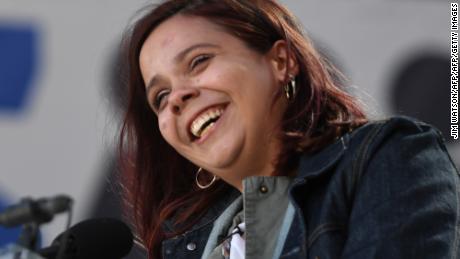 Parkland survivor vomits during gun speech 03:27
Sometimes being in front of thousands of people can be overwhelming. Samantha Fuentes, who took a bullet to the thigh and whose face was ripped by shrapnel during the Parkland shooting, had to stop during an impassioned speech to vomit.
“I just threw up on international television, and it feels great!” she said, bouncing back up.
But nausea couldn’t overwhelm her and she continued her speech, saying the students want others to join them in the fight to restrict guns to the “hands of the safe and reasonable.” 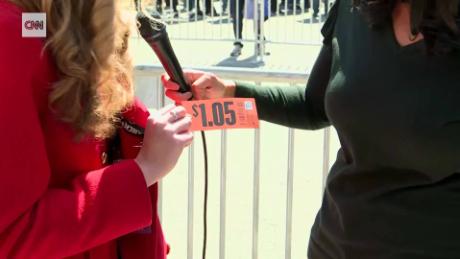 These students are wearing price tags 00:51
The price tag said $1.05. Each student from Marjory Stoneman Douglas wore one Saturday to point out how much money they say Sen. Marco Rubio got from the National Rifle Association — divided by each student in Florida.
“So, this is how much we’re worth to the … government. It’s our price tag,” Stoneman Douglas freshman Lauren Hogg said. 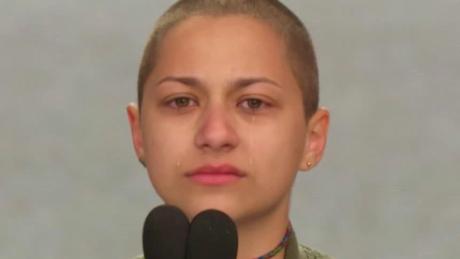 Why Emma Gonzalez stood on stage silent 01:45
Parkland survivor Emma Gonzalez has become known for firing up crowds with her words. She made her point Saturday with just a few — and a long stretch of silence during her six-plus minutes on stage.
Gonzalez began her speech by calling the names of each of the victims and things they would never do again.
Then, she stopped speaking. Tears flowed as she stood silent. The crowd broke through with random chants. But mostly, silence. Then a timer went off.
“Since the time that I came out here,” she said, “it has been 6 minutes and 20 seconds” — the amount of time, she explained, that it took for the gunman to kill 17 people at her school.

Never again is for black girls too 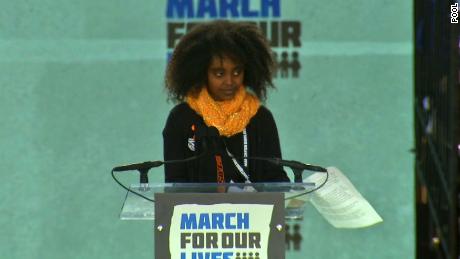 11-year-old: Never again for black girls too 01:02
Naomi Wadler took the stage with one message: Black females — who are killed in disproportionate numbers — have been left out of the gun violence conversation. “For far too long, these names … have been just numbers,” she said. “I’m here to say ‘never again’ for those girls, too.”
The 11-year-old led a walkout at her elementary school on March 14 as part of the national effort to bring attention to gun violence in American schools.
“My friends and I might still be 11 and we might still be in elementary school, but we know,” she said. “We know life isn’t equal for everyone and we know what is right and wrong.” 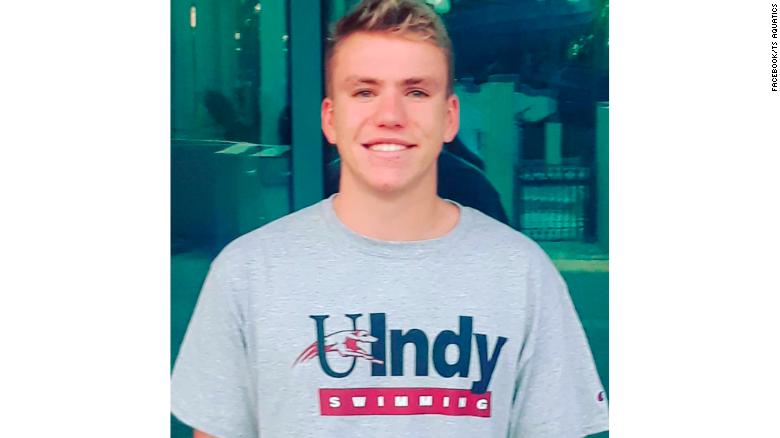 Nicholas Dworet was a senior preparing to go to college in Indianapolis when he was gunned down. Parkland students should have been helping him celebrate his 18th birthday Saturday.
Instead, the crowd sang an emotional version of “Happy Birthday.”

Barack Obama, who has a daughter in school in Washington, told the teenagers they inspired him and his wife. “You’re leading us forward,” the 44th president tweeted. The current administration called the students at the rally “courageous.”
Not surprisingly, other politicians were eager to share their thoughts. The NRA, not so much. 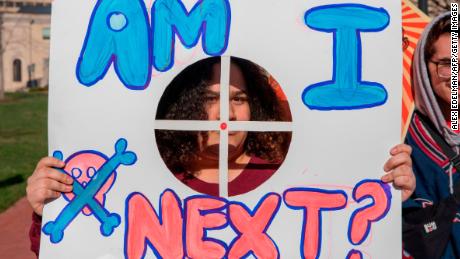 Sandy Hook survivor wants to hug, thank kids 00:39
After students at her elementary school were massacred in 2012, Leslie Gunn saw her friends advocate for change. Nothing happened. This time seems different, she said, and she thinks people are listening to the survivors from Parkland.

Grannies have had ENOUGH! 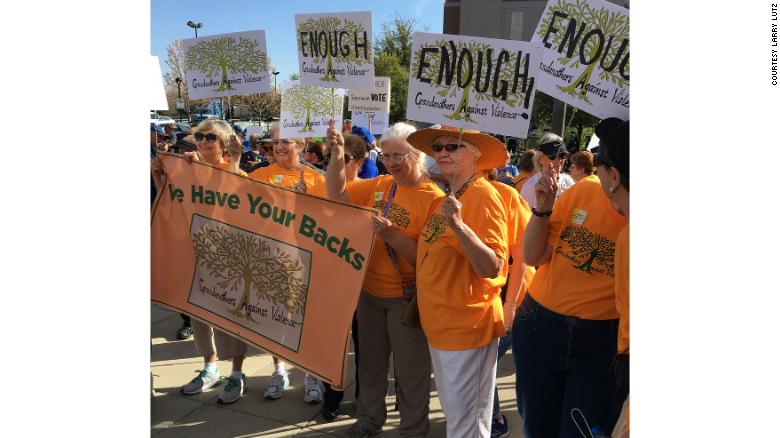 Some senior marchers in Fort Worth, Texas, carried signs that said, “ENOUGH!” The group, called Grandmothers Against Violence, also toted one that told the younger demonstrators “We Have Your Backs.”
People of all ages were out and about at the protests. 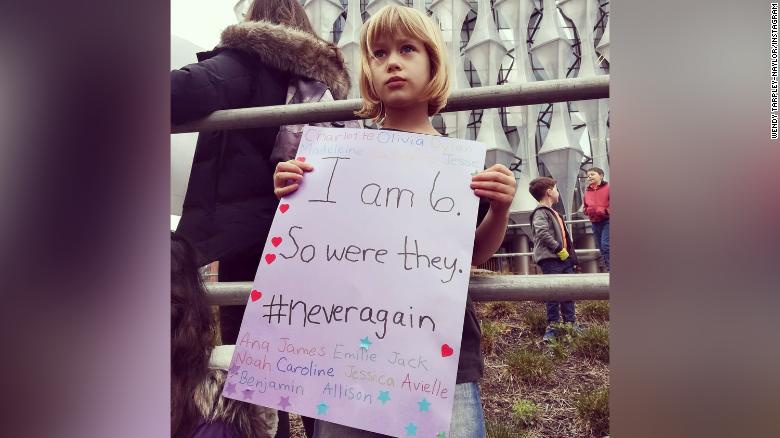 London marcher Ella was a baby when Sandy Hook happened. The 6-year-old carried a sign Saturday that reminded us many of the victims of that school shooting were her age. 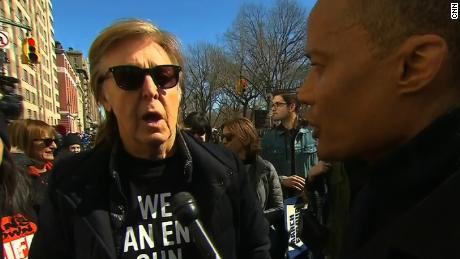 Paul McCartney references John Lennon at march 00:39
“One of my best friends was killed in gun violence right around here,” the former Beatle said at a march in New York while wearing a shirt that said: “We can end gun violence.”
McCartney was one of several celebrities who performed or spoke at the rallies. Amy Schumer, never one to shy away from controversy, called out lawmakers.
“You see that, politicians? You can make a little less money and be able to look at yourself in the mirror with no blood on your hands,” she said in Los Angeles.
In Washington, rallygoers also saw the West family — Kanye, Kim and North — and the Clooneys — Amal and George — among the crowd.

Tokyo marchers carried the names of the fallen 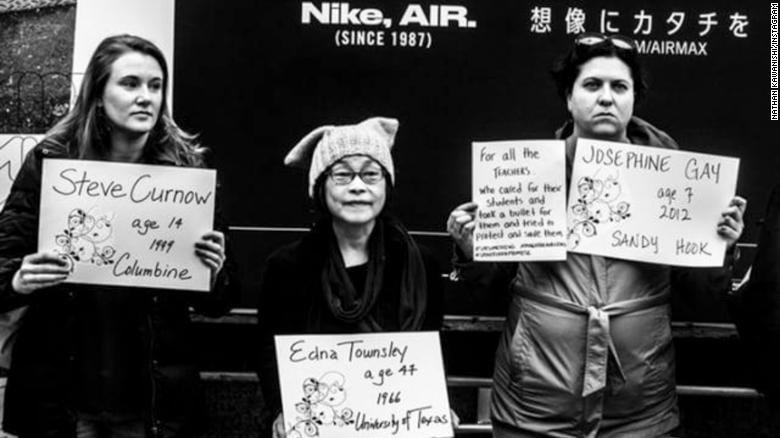 In Japan’s capital, they stood silently, each of the demonstrators holding a placard bearing the name of an American killed by a bullet.
There were also rallies in Brisbane, Australia; Copenhagen, Denmark; Madrid; Paris and Rome. 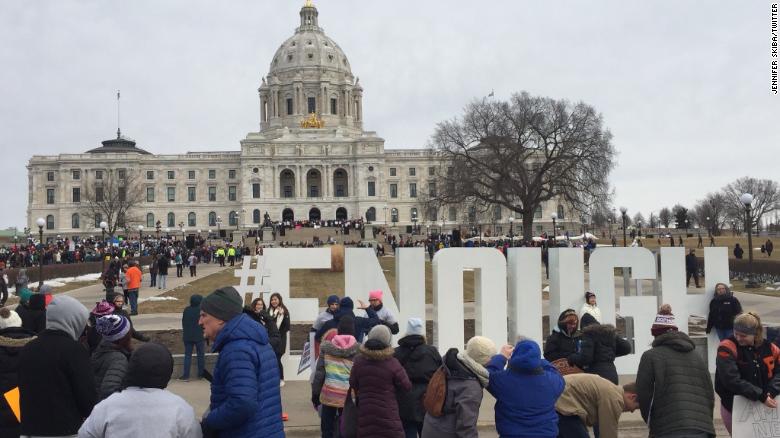 Jennifer Skiba took this photo of marchers and a large “#ENOUGH” sign Saturday in front of the capitol in St. Paul, Minnesota, on Saturday, March 24, 2018.
In case Minnesota’s lawmakers don’t get it, there’s an almost 10-foot high #ENOUGH in white letters on the grounds of the statehouse.

Demonstrators on the other side call to protect their rights 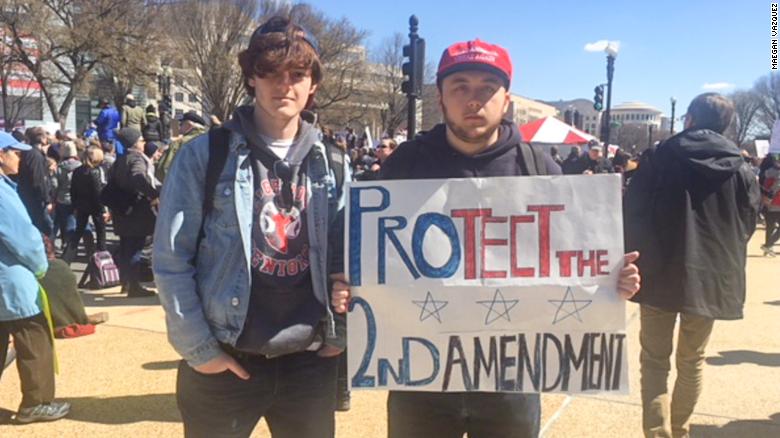 John Bolduc (left) and Eric Ciabottonia.
At some march sites, counterprotesters appealed for others to respect for the Second Amendment. Discussions, if you can call them that, were at times tense, but one of the 2A supporters said he was in Washington for discourse.
“I like talking to people I disagree with so I can get a broader range of views. I’d say there’s a lot of misinformation and I came to talk to people,” Eric Ciabottonia, a 19-year-old engineering major from Penn State University, said.