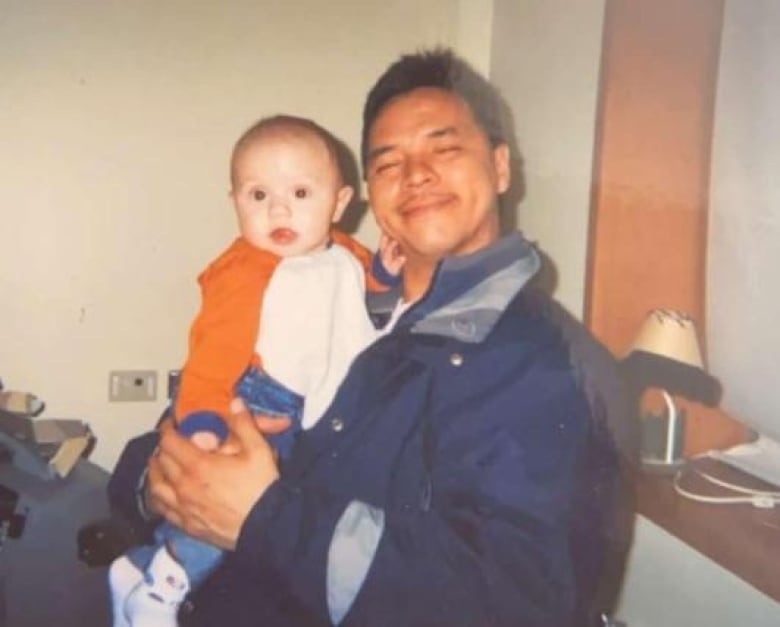 On June 6, 2019, Brian Halcrow woke up in a jail cell in Thompson, Man., with four stitches across his forehead, a torn-up sweater and no recollection of how he got there.

An officer on the scene that night said Const. Jeremiah Dumont-Fontaine punched Halcrow twice in self-defence, after Halcrow tried to hit the officer during an incident outside the Thompson Inn, according to court documents.

But now, newly disclosed court documents obtained by CBC News, along with descriptions of video surveillance footage by Manitoba’s police watchdog and interviews with Halcrow’s family and friends suggest that’s not what happened.

His best friend, Thelma Moar, says Halcrow was a peaceful man, too weakened by multiple strokes to ever pose a real threat.

“We FaceTimed and [I] saw the bloody clothes he had on, the stitches he had across his eye, and he was just covered in blood.”

That morning, Halcrow was charged with three counts of assaulting a police officer and causing a disturbance while intoxicated.

The new documents, suggesting a different version of events, were filed as part of the battle over Dumont-Fontaine’s notes that will go to court this week, and shed light on a case that has devastated the Halcrow family.

The RCMP are trying to stop an order that would mandate they handover vital information to Manitoba’s police watchdog, the Independent Investigation Unit (IIU) of Manitoba.

The IIU and the RCMP declined to comment on this story as the matter is before the courts.

Halcrow, 50, was a quiet man from Tataskweyak Cree Nation in northern Manitoba, who loved fishing and his family.

He was the primary caregiver for his mother, Maryjane, and shared an apartment with her.

He had suffered multiple strokes over the last few years, slowing his speech and making full-time employment impossible. He was often unsteady on his feet and people mistook him for being intoxicated because of his slurred speech.

“He would do anything for you. He went out of his way to help people, whether it be family or strangers. He had a great sense of humour,” said Moar.

“He was never in the bars at all. If he were having drinks, he would be at home. So that was another thing that kind of surprised us that he was there that night.”

On that day in June, he left his apartment in Thompson — a city about 650 kilometres north of Winnipeg — to grab milk for his mother.

Just after 6 p.m., Halcrow stopped at the North Star Saloon, a bar attached to the Thompson Inn.

They refused to serve him and bartenders called the police, saying he was causing a disturbance.

Video surveillance from inside the bar shows the RCMP’s Dumont-Fontaine and Const. Mark Sterdan come in and take Halcrow out of the bar, according to court documents.

Soon after, Halcrow was taken to the Thompson General Hospital, his forehead bleeding and in need of stitches.

What the Halcrow family saw

Patsy Halcrow, Brian Halcrow’s older sister, went to visit her mother the morning after he was arrested and he answered the door.

He was bruised and she saw the stitches on his forehead.

When Brian told her he couldn’t remember anything, they were both determined to get to the bottom of what happened.

It was common for Brian to black out and not remember the previous 24 hours following his strokes, Patsy said.

So they went to the Thompson Inn to ask.

They watched a video taken inside the bar, which Patsy says shows the officers arrive, and forcibly remove her brother and take him outside.

Patsy said when she went to the Thompson Inn, she could still see pools of Halcrow’s blood on the pavement outside the bar.

“I wish I had taken a picture of it,” she told CBC News.

“They should have talked to him, I know Brian, he would have reasoned with them, why didn’t they take him home?… Instead of walking in there and grabbing him and taking him outside like that.”

She hasn’t seen the footage from outside the bar.

The next day, they filed a complaint with the RCMP’s civilian review and complaints commission against both officers for excessive use of force, which Patsy said they did because Brian felt there was more to the story.

“He was just trying to clear himself,” she said.

That complaint triggered the RCMP to inform the IIU of the incident.

Court documents reveal three different versions of what happened to Halcrow outside of the Thompson Inn.

Much of this information came to light after the RCMP filed an application in December against the IIU to quash a production order. The police watchdog is seeking the release of documents written by Dumont-Fontaine the night of the incident.

Included in the documents is a report by the police watchdog’s investigator, Sarabjit Kaler, which summarizes what was disclosed to the IIU as part of its investigation, including a security video from outside the bar.

The investigator said Const. Sterdan’s report from that night said Halcrow threw the first punch and Dumont-Fontaine hit him back, delivering a punch to the head of Halcrow, followed by a second punch to his face.

It took until August before Kaler heard anything from Dumont-Fontaine. He refused to be interviewed or give investigators his notes from that evening.

Instead, on Aug. 14, he provided Kaler with a four-page statement outlining his involvement in the incident, which varied both from Sterdan’s version of events and from what Kaler observed in the security video.

He stated Halcrow did not punch him, but instead threw a hat at him which struck him in his “facial area.”

According to Kaler, security video shows Halcrow never threw a punch, and his hat never hit an officer.

Instead, Halcrow threw his baseball hat in the direction of Dumont-Fontaine.

“The hat observed to travel in the air past Dumont-Fontaine and land on the ground near a police cruiser,” said Kaler in a court document.

Dumont-Fontaine’s lawyer, Lionel Chartrand, says the video evidence is grainy and doesn’t show the full picture of what occurred.

He said he is fully confident his client will be found not guilty.

According to court documents, an internal RCMP report cleared Dumont-Fontaine of any wrongdoing, calling it a justifiable use of force.

“My client’s defence will be one of self defence,” Chartrand told CBC. “A police officer, given that it’s their job, has the right to use reasonable force to defend themselves.”

Dumont-Fontaine’s assault charge is scheduled to go to a a jury trial in January 2022.

Family and friends say Brian Halcrow, who already had a history of depression, became quiet and withdrawn following the incident.

His career prospects were limited because of his strokes and now he was facing a possible jail sentence.

He had been to jail previously and his lawyer told him he is likely going back, given the fact he was charged with assaulting a police officer.

“Brian said to me, ‘I’m not going to jail. That’s the worst place to be. I am not going,'” his sister said.

Moar said he always told her his life was never the same after he got out of jail the first time.

“He knew he was going to go to jail and unfortunately he couldn’t take it, and took his own life.”

Moar received a text message from Brian on Jan. 5 of last year, telling her goodbye.

She rushed over to his apartment complex and was told a neighbour had found him hanging in the locker room.

“Brian was my confidant. My best friend, the person I turned to … in good and bad times,” Moar said.

Days later, the IIU sent a press release, announcing the charges against Dumont-Fontaine.

It offered a small comfort to his family.

“I would like to see some justice for him, even though he’s not here,” said Moar

“I feel like he’s watching and he needs this and we all need this.”

Arguments from the IIU and RCMP over the disclosure of reports written by Dumont-Fontaine the night of the incident will be heard on March 5 in Manitoba Court of Queen’s Bench.

A production order, granted by a judicial justice of the peace last November ordered RCMP Staff Sgt. Jared Hall to hand over these reports to the IIU.

However, the RCMP will fight to have that production order thrown out.

Manitoba’s police watchdog wants access to an occurrence report written by Dumont-Fontaine the night of the incident and a subject behaviour officer response (SBOR) report.

A SBOR report is the information entered in the RCMP’s use-of-force database that looks at the behaviour of the individual and the officer’s response when force is used.

The RCMP argues the reports sought by the IIU are akin to an officer’s notes, and Manitoba’s Police Services Act prohibits an officer such as Hall from providing the notes of a subject officer to the IIU.

This is not the first court battle between law enforcement officials and the IIU when it comes to officers’ notes.

In 2020, the IIU took the Winnipeg Police Service to court in order to get the notes from a cadet who was a witness to the Taser death of Matthew Fosseneuve at the hands of police,

Winnipeg police argued cadets are civilian officers and therefore beyond the IIU’s authority to probe.

A judge ultimately decided that the IIU could not investigate with less than full disclosure from witness officers, which in their view should include cadets.

Police were forced to hand over the cadets notes.

The IIU cleared the police of any wrongdoing in that case in November of last year.

If you are thinking of suicide or know someone who is, help is available nationwide by calling the Canada Suicide Prevention Service toll-free at 1-833-456-4566, 24 hours a day, or texting 45645. (The text service is available from 4 p.m. to midnight Eastern time).