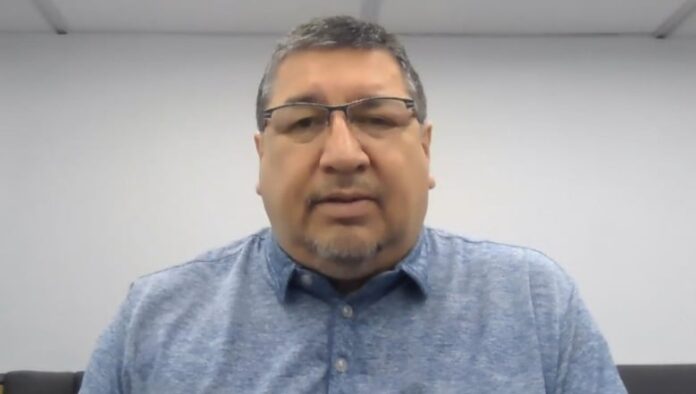 The chief of a northern Manitoba First Nation fears for his community’s safety amid a critical nursing shortage at nursing stations across the province over the holidays.

Three of 16 nurses are working this week in Pimicikamak, which has an on-reserve population of nearly 5,000.

“It’s putting our people at risk. We can’t even get our people to be seen by nurses. They have to be triaged by phone,” said David Monias, chief of Cross Lake.

The community, which is 540 kilometres north of Winnipeg, deals with a chronically understaffed nursing station, he said. He found out just last week one of four remaining nurses was being pulled to go to another community.

“They’re saying they can only see emergencies. So we’ve got three nurses that’s working 24/7 — they have to sleep as well, so to me, I feel they’re setting up the nurses to fail,” he said.

According to a memo from Indigenous Services Canada to First Nations and nursing stations in the province, a copy of which was provided to CBC, 17 of 21 nursing stations will be staffed with only two nurses over the holidays, or a combination of medical professionals.

The memo, which lays out a series of contingencies, thanks nurses and nursing stations who have gone “above and beyond during this extreme shortage of nurses.”

Monias says for some smaller First Nations, such as Tadoule Lake or York Landing, two nurses may be adequate, but for larger First Nations like his, that number is “scary.”

Except in cases of emergencies, people in First Nations are expected to call the nursing station to be triaged and get an appointment with a nurse, he said.

“Someone who has serious medical issues, they won’t be able to be assessed properly. Especially if you’re doing it by phone. If there is a serious injury or should a patient die, the nurses will get the blame, and that isn’t right,” he said.

In a statement, a spokesperson for Indigenous Services Canada said the critical nursing shortage across the country is impacting staffing levels in ISC-run remote and isolated Indigenous communities.

The federal department is “having to make the difficult decision to reduce capacity at some nursing stations in Manitoba that have access to other health-care resources to ensure others in more remote and fly-in communities maintain lifesaving services,” wrote the spokesperson.

Staffing levels will remain critical in Pimicikamak Cree Nation until Jan. 2, but the station will stay open for primary care.

Leadership of Tataskweyak Cree Nation — which is more than 700 kilometres north of Winnipeg — confirmed to CBC News it will only have two nurses at its nursing station this week, with support from two paramedics.

The nursing station in Bloodvein First Nation will also have “limited services” until Dec. 29, and patients who present will be triaged to other health-care centres, according to the spokesperson.

Bloodvein First Nation, about 200 kilometres due north of Winnipeg, has an all-season road and can access a hospital two hours away in Pine Falls, according to Indigenous Services.

The spokesperson added in the event that no primary care providers are available at all, the department will work with the community and province to identify other places for health-care services.

“ISC will make every effort to provide access to health care by phone, at an alternate nursing station or health clinic. In the case of an emergent or urgent medical situation, medevacs will transport patients to the closest hospital,” wrote the spokesperson.

‘We can’t wait for someone to die’: chief

Monias wants to see people flown out for medical care or triage that the nursing station can’t provide, not just emergencies. He said at one point during the COVID-19 pandemic, 20 people were waiting to be flown out of the community for medical care elsewhere.

“We have a hard time getting people flown out when there’s [an] adequate number of nurses and doctors. It’s even going to be harder to get someone to even see a nurse in the community,” he said.

“We can’t wait for someone to die before action is taken.”

He said his community has doctors, but they too are overwhelmed.

He advises people to keep notes of their symptoms if they need to call the nursing station, so they can fully describe what they’re facing.

He said he understands that it’s difficult to staff communities with fly-in nurses — many have retired or want to be with family over Christmas.

He’d like the federal government to consider staffing stations with licensed practical nurses and funding training programs for community members who won’t have to “parachute in and out.”

“I think government needs to step up,” he said.

The Indigenous Services spokesperson said the federal government’s non-insured health benefits program, which provides eligible First Nations and Inuit clients with coverage for a range of health benefits not otherwise covered, will be available to help patients seeking treatment outside of their community.

The department is continuing its national recruitment strategy with incentives to boost staffing in remote regions, the spokesperson said.

“In comparable populations that are non-Indigenous, they won’t accept there are only three nurses in their community,” he said.

“We can’t allow the government to neglect us medically. It’s just too dangerous.”