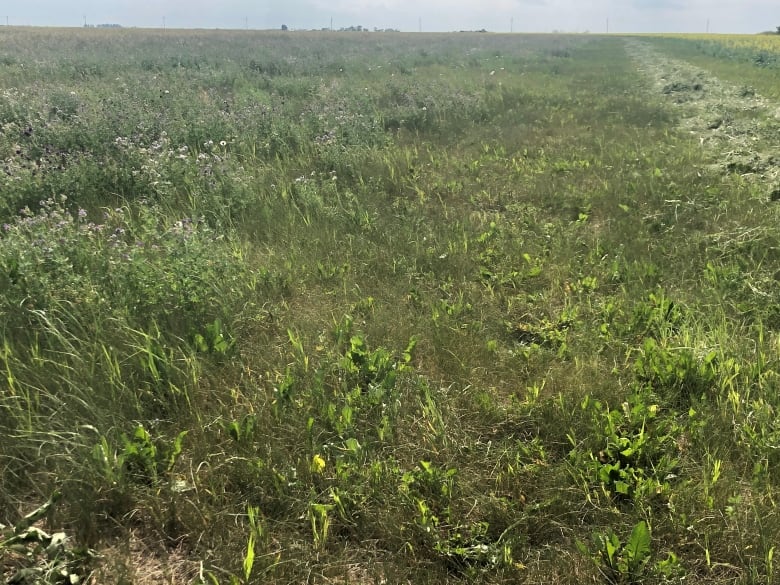 Relentless heat, record-breaking temperatures and a lack of rain are pushing some Manitoba farmers over the edge.

The Rural Municipality of St. Laurent, in the Interlake region, declared an agricultural state of disaster on Monday.

The municipality says it has received less than 40 per cent of the normal amount of rain so far this year, crop yields are coming in at excessively low volumes, and dugouts and wells are dry or drying up.

Water supply and water quality is a growing concern, while a grasshopper infestation is compounding the lack of forage, the municipality said.

Deputy Reeve Frank Bruce said some farmers are being forced to sell their livestock because of the high cost of feed and water. He calls the farmers’ plight desperate.

“Some are selling off their cattle because of the dryness. It is a disaster. Many don’t have water,” said Bruce. “They are getting wells dug up and are actually hauling water from the lake into the dugouts.

“And on top of this, grasshoppers are eating their crops. There is an infestation.”

The extreme economic impact has forced council to ask for immediate assistance through provincial and federal programs, Bruce said.

Bill Campbell, president of Manitoba’s Keystone Agricultural Producers, isn’t surprised. He said the Interlake is very dry and in rough shape. So are many other areas in the province.

KAP represents about 4,500 farmers in the province and around 21 commodity groups.

“There is probably irreversible damage to the crops, the hay and the pastures,” said Campbell.

“With this heat there will be pod abortion, and the wheat won’t be as good as it could be. It’s just too much stress and you don’t get it back. You can’t repair that at this stage of the game.”

Campbell said it’s too early to know the monetary value of the damage. He said farmers measure what goes into the bin, and those number aren’t available yet.

While isolated showers did bring some optimism in mid-June, Campbell says the heat dome over the weekend has left farmers worried and concerned if harvest will be earlier than usual this year.

“Beetles ravaging canola, frost and cold temperatures in the spring, poor germination and then re-seeding, it’s almost like your emotions are a yo-yo. You go up and down,” he said. “Then this blast of intense heat.

“While we know a lot about how to deal with adversity, Mother Nature holds the trump card, and we haven’t had enough rain.”

He is worried about the lack of water for his purebred livestock too, citing a lack of snowfall this winter and spring runoff.

“The dugouts, the creeks didn’t replenish. And you know whatever limited rainfall these was, there was no runoff. The dugouts are dry and empty,” said Campbell.

“Without water on a pasture, it becomes a problem for cattle. They need to drink everyday. And on Saturday and Sunday, they would have in excess of 10 gallons per animal. If you don’t have water, you have to move them.”

He has had to build a fence and move his cattle back to the well, putting in shallow pumps to access water and trench it to the pasture.

‘We get one chance at this’

Larry Wagner says anything that was stressed before the heat wave is going downhill fast.

Wagner is a cattle producer near Virden, Man. He’s also the chair of the Manitoba Forage and Grasslands Association.

“Some of the crops are on the verge of being written off and then they can be harvested as feed for livestock. Some of them won’t make a crop. We just have to keep going and salvage what we can,” said Wagner.

“We get one chance at this every year. We can’t fix it if the rain doesn’t show up. We will be having to make some major decisions on how we as producers cope with the consequences of this weather,” he said.