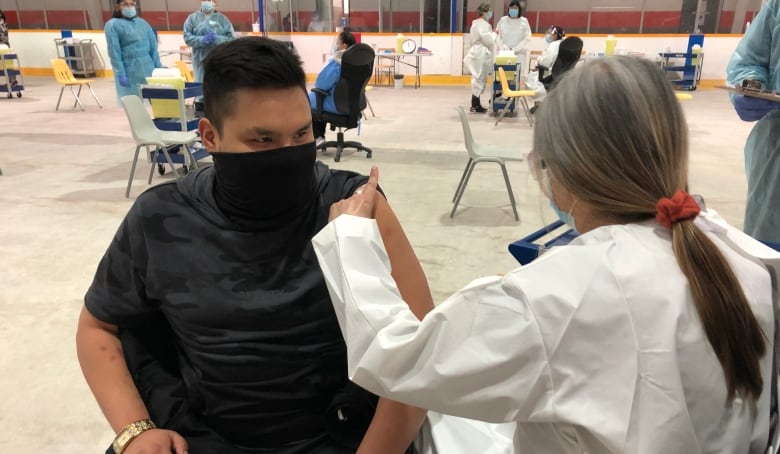 First Nations leaders in Manitoba are racing against an early spring melt and the onset of new COVID-19 variants to vaccinate all adults in all 63 First Nations communities.

In a converted hockey rink in Pimicikamak Cree Nation, 21-year-old Garvin Mckay was one of the first to roll up his sleeve in a mass vaccination clinic.

“COVID kept me from doing the things I want to do. This will help me get back to a normal life,” he said. “It feels good to have my vaccination.”

About 8,000 people reside in the adjoining communities of Pimicikamak and Cross Lake. COVID-19 has killed five. Approximately 700 more have become sick.

The worst cases are being airlifted to Winnipeg, more than 550 kilometres away, for urgent care.

The First Nation has been under various states of lockdown for more than a year.

That includes curfews, a checkpoint controlling who comes and goes, and rules confining residents to certain parts of the community. The local middle school now serves as an isolation shelter; kids aren’t going to school.

“People are getting lonely, missing being able to do things normally,” he said. “COVID has done a lot of damage to people’s health and wellness.”

Meanwhile, a warm spring is melting ice roads early, threatening to make some communities harder to reach. There are also fears that COVID-19 outbreaks during an early summer fire season could drastically complicate community evacuations.

Mckay’s vaccination makes him not only one of the first in the drive, but also one of the youngest non-health-care workers to have a first shot in the entire province. The clinic is set up to do 1,000 a day.

In an approach that is unique in Canada for Indigenous vaccinations, Manitoba First Nations leaders are hoping to immunize 100,000 people in 100 days; holding mass vaccination clinics in each of the province’s First Nations along with more than 20 adjacent communities.

Indigenous people make up between 10 and 13 per cent of the population but have accounted for more than half of COVID-19 hospitalizations, according to provincial stats.

“We know what the stats are and we know what the poor outcomes are for First Nations,” said Melody Muswaggon, a former nurse, now the health innovations lead of the University of Manitoba’s Ongomiizwin Indigenous Health Institute, which is overseeing the rollout of the vaccines.

“Getting as much vaccine into the communities as quick as we can is going to be a game-changer, we will save a lot of lives,” Muswaggon said.

Unlike the rest of the province, which is vaccinating people based on age, the clinics have no age limits. Anyone over 18 living on-reserve or adjacent to it can be vaccinated.

The hope is to quickly build herd immunity and avoid the need for return trips. The military will assist to help get people and vaccine into the communities quickly.

Muswaggon sees it as a race to get needles in arms before variants of concern become more common and remote communities become even harder to reach.

“It’s very urgent the variants are coming in and and we want to ensure that we get as many people vaccinated and protected before that arrives,” said Muswaggon.

Both the federal and provincial governments are touting First Nations control over vaccines in Manitoba as an act of reconciliation, it’s also about pragmatism.

“The federal government and the provincial government didn’t really have a plan for First Nations on how to support them when the vaccine was coming out,” explained Muswaggon.

“We knew they were going to need help.”

Ongomiizwin put together a team of Indigenous health leaders to design and deliver the roll out.

Many of the 250 or so staff administering the shots are Indigenous doctors, nurses and paramedics who will travel the province in the coming weeks.

That brings cultural benefits too.

Having a nurse who can explain how the vaccine works in Cree may help attract those who may be uncomfortable in the mainstream health system, overcome vaccine hesitancy.

“It makes a difference when, especially with the elders, when they can communicate better,” said Muswaggon.