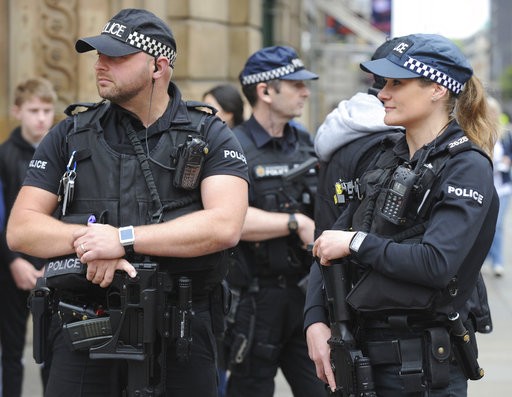 A 19-year-old man is now the only person being held in connection to Britain’s investigation into the Manchester Arena suicide bomb attack, after being arrested at an airport. He was detained “on suspicion of offenses contrary to the Terrorism Act,” the Greater Manchester Police says.

“At it stands 23 people have now been arrested in connection with this investigation, of which two were quickly de-arrested, and 20 were released without charge,” according to a police update Friday.

“One person remains in custody,” the statement said.

The man was arrested Friday at the Liverpool John Lennon Airport. The police added that they were also searching a property in the Manchester suburb of Fallowfield — about 35 miles east of the Liverpool airport.

Suicide bomber Salman Abedi died in the attack that followed an Ariana Grande concert in May, killing 22 people. The man who was arrested today could be a relative — local newspaper the Manchester Evening News quotes a neighbor who says, “The boys who live there are related to Salman Abedi through their father. Everyone knows that. Everyone here knows there is a family link.”

Images from the scene of the search showed forensic workers and police in the front yard of a red brick rowhouse.

Abedi, who was 22, was born in the U.K. after his parents emigrated from Libya. In the days after the Manchester attack, Abedi’s father and brother were arrested in Libya.