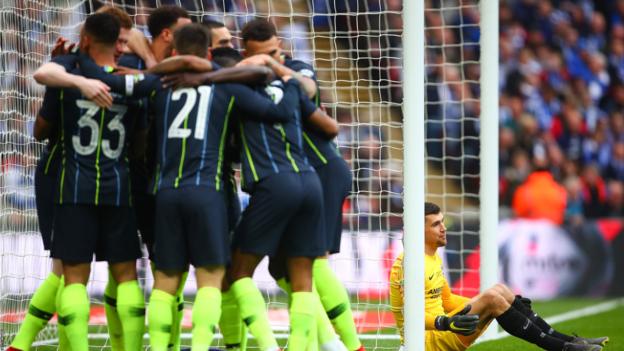 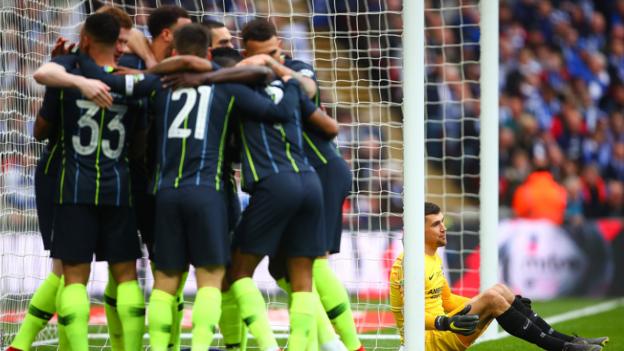 Manchester City stayed on course for the quadruple as they reached the FA Cup final after edging out Brighton at Wembley.

Pep Guardiola’s side were nowhere near their best but a largely undistinguished contest was settled by Gabriel Jesus’ stooping header after only four minutes, converted from Kevin de Bruyne’s perfect right-wing cross.

Brighton battled manfully but could not turn possession into prolonged threat, although City were grateful to Aymeric Laporte’s clearance from right under his own crossbar after the break with Glenn Murray poised to score.

Manchester City defender Kyle Walker was fortunate to escape a first-half red card after a VAR review for thrusting his head into the face of Alireza Jahanbakhsh after the pair clashed – and ultimately they were happy to simply close out the win.

They will now face either Watford or Wolves in the final at Wembley on 18 May and also remain in the hunt for the Premier League and Champions League after winning the Carabao Cup.

Manchester City have a list of three further targets as they chase a historic quadruple – the FA Cup, Premier League and Champions League.

Some may regard as the FA Cup as the least pressing of those priorities but Pep Guardiola’s team selection and body language here at Wembley illustrates the importance he attaches to this historic competition, a trophy that has so far eluded him since his arrival in England.

The Catalan was animated throughout, often in fury, but his fist-pump to his backroom team as City moved into an attacking position in stoppage time showed he wants the FA Cup on his – and his club’s – CV very badly.

Make no mistake, City were were light years away from their imperious best, failing to confirm their authority after an early goal that ripped up Brighton’s blueprint of containment.

But, for a side that has world-class attacking football as its trademark, City gave very little away at the back and most key aerial challenges were won.

City did not excel – but they are in the FA Cup Final and move on to face Tottenham Hotspur in the Champions League quarter-final first leg in the Londoners’ majestic new stadium on Tuesday.

Brighton’s players were given a standing ovation at the final whistle from the supporters who packed their portion of Wembley, in recognition of the endeavour they had displayed.

It was deserved for the effort they put in which kept them in contention right until the end after it had looked like they may be swept aside once City struck the early blow.

In reality, however, they barely laid a glove on City for all their possession, the only real scare coming when Laporte had to hoist that second-half clearance over his own crossbar with Murray poised.

The Seagulls were never lacking in application but they just did not have the pace or threat to provide the final flourish to decent build-up work.

Chris Hughton’s side will take credit from their performance but, on reflection, may also regard it as something of a missed opportunity as they came up against an off-colour and uninspired City team.

The hopes of their first FA Cup final appearance since 1983 have disappeared and now it is back to the more routine business of ensuring Premier League safety.

Manchester City manager Pep Guardiola: “It was a semi-final, Brighton are an incredible defensive team, we knew that set pieces were huge, massive. We conceded too many but only one dangerous situation. We are in the final, we are there.

“My opinion is that nobody has done it [won the quadruple] so why can we do it? It is almost impossible to achieve everything, that is the truth. Our fans will come, more than today, for the final, we are losing players every game but still we will try to do it.

“I am happy to be in the final, we extend our season by one more week and we are happy for that.”

Brighton manager Chris Hughton: “I am incredibly proud. After conceding after three minutes I don’t think there was anyone in the stadium that thought the second wasn’t going to come. We hung in and to go through the 90 minutes and, apart from the goal, I struggle to think of a real clear chance. That wouldn’t have happened often. if at all, to them this season.

“We have raised the bar today in the level of our performance. The most important thing is to take that into the difficult games. We have got vitally important home games. We have to get something from those two.”

Manchester City enjoy their trip to Wembley – the stats

City’s bid for the quadruple continues on Tuesday as they return to Champions League action. They meet Tottenham in the first leg of their quarter-final at 20:00 BST.

Brighton’s next game is an important home Premier League fixture against Bournemouth on Saturday (15:00) as they bid to avoid relegation.