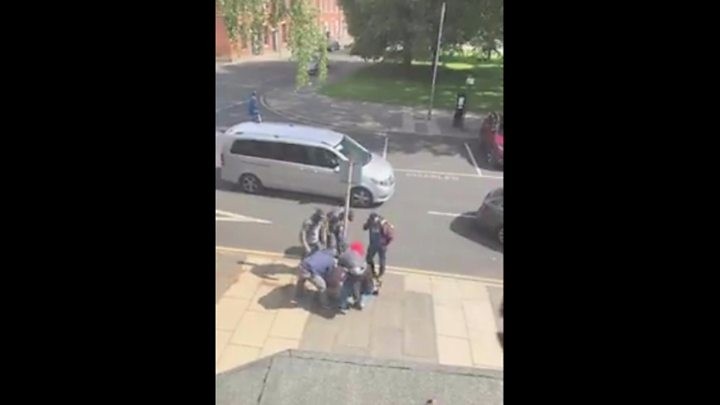 A seventh person has been arrested in the UK over the Manchester Arena bombing, as police said they were investigating a “network”.

Suicide bomber Salman Abedi killed 22 – including children – and injured 64 at an Ariana Grande concert on Monday.

The bomber’s father, Ramadan, and younger brother, Hashem, have been detained by militia in Libya.

And his older brother, Ismail, was detained in Chorlton, south Manchester, on Tuesday.

The fifth UK arrest on Wednesday – in Wigan – involved a man who was carrying a package that is now being “assessed”, police said.

Eyewitness Connor Britton told the BBC the man had been held by “undercover armed police”.

He said workers in his office had been told to stay inside and lock their windows, and that a red package had been “moved to a clear part of the street”.

The UK terror threat level is now at its highest level of “critical”, meaning more attacks may be imminent.

Military personnel are being deployed to protect key sites after the UK’s terror threat level was raised on Tuesday night.

Home Secretary Amber Rudd said: “[Monday’s attack] was more sophisticated than some of the attacks we’ve seen before, and it seems likely – possible – that [Abedi] wasn’t doing this on his own.”

Meanwhile, the New York Times has obtained photos which it says were gathered by UK authorities at the scene of the attack, including the remnants of a backpack, nuts and screws, and a device identified as a “possible detonator”.

The paper says the alleged evidence suggests “a powerful, high-velocity charge, and a bomb in which its shrapnel was carefully and evenly packed”.

UK authorities have reacted with anger to the publication of the leaked pictures.

One Whitehall source told the BBC there was “disbelief and astonishment” across Whitehall.

A counter terrorism policing spokesperson said it was a breach of trust that undermined relationships with “trusted intelligence, law enforcement and security partners around the world” and undermined the confidence of victims, witnesses and their families.

“This damage is even greater when it involves unauthorised disclosure of potential evidence in the middle of a major counter terrorism investigation,” the spokesperson added.

BBC security correspondent Frank Gardner said that the bomber is thought to have been a “mule”, using a device built by someone else.

What’s happening with the investigation?

Seven people have been arrested in the UK since Monday night, including Abedi’s older brother Ismail, 23.

Younger brother Hashem, 20, was held by militia in the Libyan capital Tripoli, as was their father.

Speaking on Wednesday afternoon, Greater Manchester Chief Constable Ian Hopkins said: “I think it’s very clear that this is a network that we are investigating.

“And as I’ve said, it continues at a pace. There’s extensive investigations going on and activity taking place across Greater Manchester, as we speak.”

As part of their investigation, police raided a block of flats near Manchester Piccadilly station in the city centre, requiring them to carry out a controlled explosion and briefly close the railway line.

Anyone with information about the attack can call the anti-terror hotline on 0800 789321.

The victims include 14-year-old Sorrell Leczkowski, from Leeds, whose grandmother is critically injured in hospital.

Kelly Brewster, 32, John Atkinson, 28, Georgina Callander – thought to be 18 – and Marcin and Angelika Klis, a Polish couple from York, have also been named.

South Shields couple Chloe Rutherford, 17, and Liam Curry, 19 have been named among the dead. Family members paid tribute to the teenagers and in a statement issued by police said: “They wanted to be together forever and now they are”.

Some of the victims had been making their way outside at the end of the gig when Abedi detonated his “nuts-and-bolts” bomb.

Others had been waiting in the foyer to pick up children and family.

A serving Cheshire police officer – off-duty at the time – was also among those killed. She has not yet been named.

The BBC understands her partner is critically ill and his two children were injured.

Of the 64 injured, 20 are in a critical condition. Twelve of them are children.

Mr Hopkins said the families of all those injured had been contacted.

Who was the attacker?

Salman Abedi is understood to have been a 22-year-old born in Manchester to Libyan parents, and a former University of Salford student.

He attended Burnage Academy for Boys in Manchester between 2009 and 2011, and The Manchester College until 2013.

Hamid El-Said, who worked for the UN on tackling radicalisation and now works at Manchester Metropolitan University, said Abedi had had a “really bad relationship” with his family and his parents had tried but failed to keep him on the “right path”.

“Eventually he was doing very bad at his university, at his education, and he didn’t complete, and they tried to take him back to Libya several times. He had difficulties adjusting to European lifestyle,” he said.

A former classmate of Abedi’s told the BBC that he was a “very jokey lad” but also “very short tempered” and would get angry at “the littlest thing”.

The man, who did not want to be identified, said Abedi had hung around “the wrong crowd and was very, very gullible”.

Before leaving Burnage Academy in 2011, Abedi had become “more and more religious”, the man added.

A Muslim community worker, who did not want to be identified, has told the BBC that two people who had known Abedi at college had made separate calls to a hotline to warn the police about his extremist views.

He said they had been worried that Abedi was “supporting terrorism” and he had expressed the view that “being a suicide bomber was ok”.

The calls are thought to have been made five years ago, he added.

What does a ‘critical’ threat level mean?

Prime Minister Theresa May said soldiers are being placed at Buckingham Palace, Downing Street, embassies and the Palace of Westminster to support armed police in protecting the public.

Military personnel may also be seen at other events over the coming weeks, such as concerts, Mrs May said, in what she is calling a “proportionate and sensible response”.

Home Secretary Amber Rudd said 984 troops had been deployed in the first instance. Up to 3,800 are available.

She said she expected the raising of the threat level to critical to be temporary, adding that the bomber had been known “up to a point” by the intelligence services.

The highest threat level has been reached only twice before: in 2006 during an operation to stop a plot to blow up transatlantic airliners, and a year later when security chiefs were hunting for the men who tried to bomb a London nightclub and attacked Glasgow Airport.

The Metropolitan Police says it has increased its presence across London, and freed up an extra 1,000 armed officers to patrol crowded places, key sites and transport hubs across the UK.

The Palace of Westminster has been closed to the public following police advice, and will not re-open until further notice, its website said.

Have you been affected by the events at Manchester Arena? Please email us at haveyoursay@bbc.co.uk