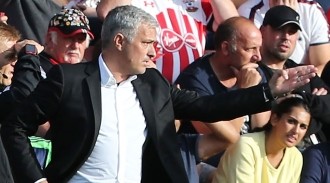 Premier League giant Manchester United have deliberately not given the No.7 jersey out this season because they are expected make marquee signing next summer, as many legendary superstars who dons the icon shirt.

Jose Mourinho made no secret of his desire to add a new winger to his squad during the transfer window, though failed in bids for Ivan Perisic and Gareth Bale.

According to Daily Star, Red Devil

desperate to bring £100 million Atletico Madrid forward Antoine Griezmann next summer after he moves to Old Trafford fail due to Rojiblancos transfer ban meant that the deal never materialised, with the Frenchman opting to stay.

Atletico Madrid transfer embargo will be lifted in January, with Red Devil make have the opportunity to go for early next year or next summer.

The No. 7 has been worn by United legends including George Best, Bryan Robson, Eric Cantona, David Beckham and Cristiano Ronaldo with Mourinho has the 26-year-old Griezmann lined up as the next star to be honoured with the number

Manchester United will set aside around £100m activate the striker release clause and they will likely still face fierce competition from around Europe for their top target next summer.

The most recent wearer of the No.7 shirt was Memphis Depay, who endured a rather disappointing career with the Red Devils before moving to French side Lyon last summer.