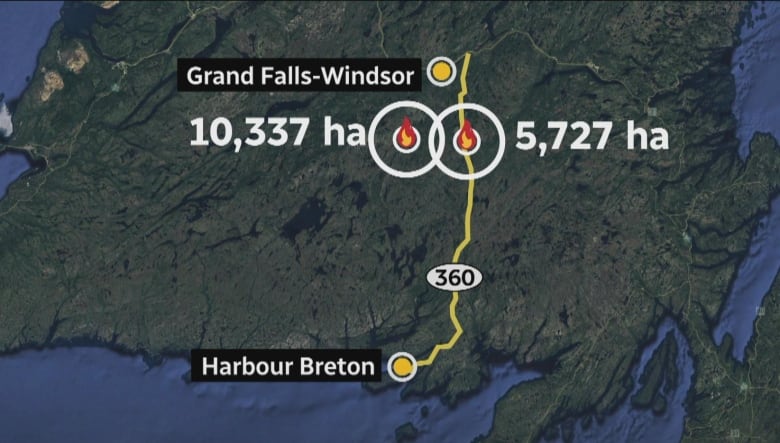 The highway has been closed for days amid a persistent wildfire that’s kept more than 20,000 people under a state of emergency since Saturday.

The Department of Fisheries, Forestry and Agriculture said in a tweet that the Bay d’Espoir Highway is open, and asked the public to “drive slowly and don’t stop. Please have patience and be safe.”

Meanwhile, the province’s provincial forest fire duty officer is looking to the forecast for rain Tuesday, after one of two raging forest fires near Grand Falls-Windsor grew overnight by more than 50 per cent.

Jeff Motty said the size of the Paradise Lake fire, located in a forested area of central Newfoundland, is estimated at 10,337 hectares, or 100 square kilometres — more than three times the size of Bell Island and as large as Gander’s town boundaries.

Even though water bombers were on the scene all day Monday, the size of the blaze prevented firefighting crews from tackling the fire directly.

“We really got to get the crews on that fire soon,” Motty told CBC News on Tuesday.

“If we can get a lot of water bomber activity on that, what happens then is we’re able to get on an edge or a plank of that fire’s perimeter, where it’s safe to do so with crews, and we can start putting out hose lines out and start containing that fire,” he said.

“But we’re not quite ready to do so yet. That fire is so huge that it’s going to take a lot time to tidy up that site.”

Winds at Paradise Lake shifted north Monday, allowing water bombers to be on the site for much longer than in  previous days, Motty said.

Out-of-control fires have been burning now for more than two weeks, a result of abnormally hot and dry weather for the province.

Premier Andrew Furey issued a state of emergency for some communities over the weekend, including Grand Falls-Windsor, Bishop’s Falls and Botwood. The order affects more than 20,000 people.

Furey asked those residents to be on high alert for an evacuation order, and suggested those with lung conditions such as asthma may want to leave in advance of any potential for heavy smoke. Public Safety Canada said in a tweet Monday that anyone preparing to evacuate should ensure they have enough fuel in their vehicle and have an emergency kit ready.

He will lead a news conference at 2 p.m. NT to offer an update.

As a result of the shifting winds Tuesday, a special air quality statement has been issued for Corner Brook and other western Newfoundland communities, as well as parts of central Newfoundland including Buchans, Green Bay and White Bay.

Meanwhile, the fire that closed the Bay d’Espoir Highway also grew Monday, with Motty estimating the fire now spans 5,727 hectares, an increase of almost 10 per cent.

WATCH | The CBC’s Henrike Wilhelm reports on the fires in central Newfoundland: 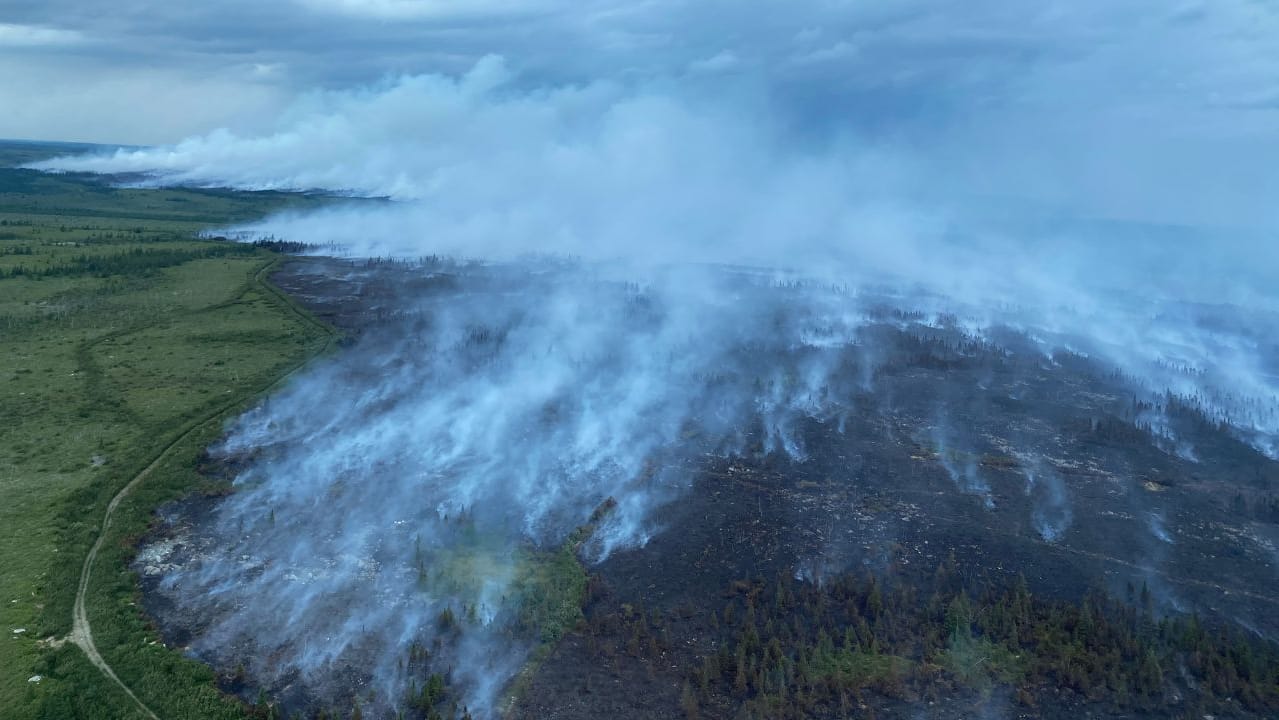 Conditions in central Newfoundland were better Monday as crews continued to battle two major wildfires in the region.

Crews will continue to assess when the highway could reopen, he said.

Crews also performed controlled burns in the area Monday to destroy dried leaves and other small fire starters to help limit the growth and intensity of a spreading forest fire.

“We got a lot of different pieces to this puzzle that are working really well, so we had a lot of good progress yesterday,” Motty said.

Tuesday’s weather forecast may also play a role in helping to fight the spreading fire. Forecasts from Environment Canada say five to 10 millimetres of rain are expected in Grand Falls-Windsor Tuesday, with southeast winds of 20 km/h gusting to 40 and a high of 15 C.

A similar forecast is expected in Bishop’s Falls, with as much as 10 millimetres of rain expected to fall throughout the day.

Rain is expected to continue in the coming days, along with the cooler temperatures.

“Fire and weather, they go so hand in hand, so we really need Mother Nature on our side.”

Stay prepared as supplies start to come in: mayor

The forecast is welcome news for Bishop’s Falls Mayor Bryan King, whose community of about 3,000 people lies 30 kilometres from the path of one of the fires.

“The fire is still continuing to grow and it is extremely active. However the good news is that … fire suppression has been continuing all day,” King said Monday evening, noting he’s never seen emergency efforts like this during his time in the region. “The air strikes and the water bombers are actively working today.”

Supplies are starting to trickle into the community by helicopter due to the prolonged Bay d’Espoir Highway closure. The road is the only access by car or truck for small communities on the Connaigre Peninsula and in the Coast of Bays region to the rest of Newfoundland.

The provincial government had originally planned to deliver goods by a ferry that departed from Fortune on Sunday, but the boat is now in St. John’s for repairs because of mechanical issues.

The government has also set up phone lines for questions relating to supplies, transport and more. The Provincial Emergency Operations Centre can be reached at 833-845-0775 from 8 a.m. to 8 p.m. NT, while Central Health will operate a health line at 1-833-960-4571.

King said those on the ground will have to see what Tuesday holds and how the fire behaves before figuring out their next move.

In the meantime, he’s asking residents of his central Newfoundland town to remain prepared to leave on a moment’s notice.

“Right now we’re asking everyone to have a bag packed, have your essentials ready to go, because depending on wind direction things can turn bad pretty quickly.”