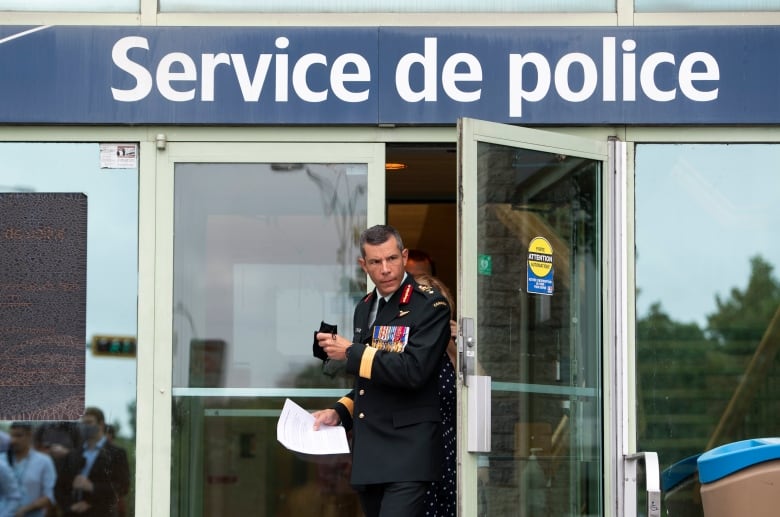 Maj.-Gen Dany Fortin is fighting in Federal Court to get back his old job as head of Canada’s vaccine task force — even though the government says the role no longer exists.

Fortin was removed from the high-profile post after he was accused of sexual assault and subsequently charged.

Fortin’s legal defence made its arguments today during the start of a two-day virtual hearing, which Fortin attended with his camera off. His lawyers argued that if his former position is not available, he should be given another role that reflects his rank.

Fortin’s legal team said that he has not been given a new assignment and appears to have been bypassed for promotion since he was removed from the secondment.

“To remove an officer from an assignment and not reassign him is precisely the meaning of relief from performance of military duty,” said Natalia Rodriguez, one of Fortin’s lawyers. “This is akin to a suspension or a leave of absence.”

Other military members who faced sexual misconduct allegations have been placed on leave with pay pending an investigation.

Fortin’s legal team argued the decision to publicly announce that Fortin was leaving the vaccine rollout during a military police investigation was made for personal and political gain by Prime Minister Justin Trudeau, Health Minister Patty Hajdu, Defence Minister Harjit Sajjan and the clerk of the Privy Council.

The Department of National Defence publicly announced in May that Fortin was leaving his secondment with the Public Health Agency of Canada during a military police investigation into a sexual misconduct allegation.

Quebec prosecutors charged Fortin in August with one count of sexual assault in connection with an incident alleged to have taken place in 1988. Fortin denies the allegation and has said he’s been living through a “nightmare.”

While the criminal matter is adjourned until November, Fortin’s legal team asked the federal court today to review the decision to remove him from his secondment without reassignment and to publicly announce that the investigation was the reason for his removal.

That secondment was to officially expire on Oct. 31 but has been wound down already due to the accelerated vaccination rollout. The federal government’s lawyers argue Fortin’s claim is now moot because the job no longer exists.

Fortin’s lawyers, meanwhile, argue the claim is still valid because there is no proof before the court that the position has been eliminated and Fortin’s replacement, Brig.-Gen. Krista Brodie, is no longer in the role.

Fortin’s legal team argues that Acting Chief of the Defence Staff Gen. Wayne Eyre was the one who had the proper authority to remove Fortin from his secondment. His lawyers also claim Eyre wasn’t able to make that decision due to political interference.

Thomas Conway, one of Fortin’s lawyers, said that just days before Fortin was told of his removal, Eyre signed off on a performance review that showed he was suited for a promotion.

During the virtual hearing, Conway played a clip of Hajdu on CTV speaking to host Evan Solomon after Fortin’s removal from his secondment.

In that clip, Hajdu said that she was made aware of an issue regarding Fortin in March and was assured there was a process in place to manage the allegations. Hajdu said she was then told of a further development in May and “agreed” with the president of the Public Health Agency of Canada, Iain Stewart, that Fortin “should be relieved of his duties with the Public Health Agency.”

Conway argued that Hadju’s comment clearly shows Eyre did not make the decision to remove him and that Hajdu and Stewart were involved.

“It does implicate the minister in the decision that was made,” he said.

The case has opened up arguments about jurisdiction.

Federal government lawyers argued this morning that Fortin was never dismissed from his role in the military and continues to serve as a member. Lawyer Elizabeth Richards argued that the military’s grievance process is the proper venue to deal with the matter and is asking the judge to throw out the case.

“The applicant cannot simply bypass that scheme and come to this court.”

Conway, disagreed and argued that the military’s grievance process is plagued by delays that would end up protecting the cabinet-level decision-makers involved.

“It would effectively protect the ministers from the political decision that they made in this case and there would be no effective remedy for Maj.-Gen. Fortin,” said Conway.

Prime Minister Justin Trudeau says he has not been given a lot of details about the allegations against Maj.-Gen. Dany Fortin, former head of Canada’s COVID-19 vaccine distribution effort. 1:39

‘It was an extraordinary thing to do’

Conway argued that Fortin’s case is time sensitive and “publicly terminating” him had “huge repercussions not only for his military career, but for his reputation as a leader in the Armed Forces.”

“It was an extraordinary thing to do,” said Conway. “Something that surely would not be condoned by the chain of command.”

Conway argued that because the damage was public, it should be addressed in public.

Both Fortin and the federal government have said they would be seeking costs and want to deal with that matter at the end of the hearing, which is scheduled to wrap up tomorrow.

The criminal case against Fortin is scheduled to resume in court on Nov. 5.