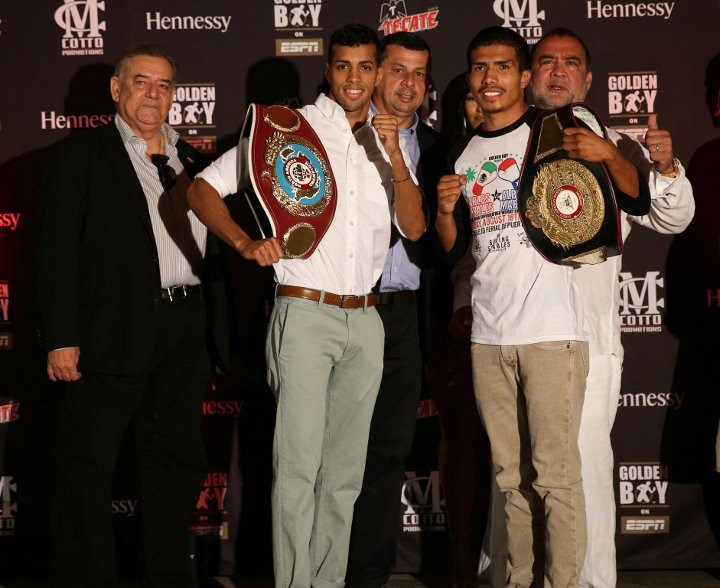 Southpaw Machado, considered one of Puerto Rico’s top prospects, scored a knockdown in the second round but could not finish his crafty Mexican rival.

Morales’ best round was the 10th round when he rallied with solid shots to the body and head. The weary Machado was forced to hold a number of times, but made it the final bell.

Although he deserved the victory, the lopsided scores of 99-90, 99-90 and 98-91 in Machado’s favor didn’t seem to reflect the competitive action inside the ring.

Alberto “El Explosivo” Machado, left, scored a knockdown in the second round but needed all 10 rounds to get a unanimous decision over Carlos Morales of Mexico. Photo provided by Hector Santos Guia/ Miguel Cotto Promotions, LLC, Golden Boy Promotions

In the chief supporting bout, Nate Green (9-0, 2 KOs) overcame a second-round knockdown and a cut on the side of his left eye to win a unanimous 8-round decision over Emanuel Rivera (17-2, 11 KOs) in a sloppy but attention-grabbing bantamweight bout. All the three judges had Green ahead 77-74.

Green, from West Haven, Connecticut, used lateral movement to stay out of further trouble, while landing light but accurate combinations. Rivera, from Toa Baja, Puerto Rico, applied steady pressure but failed to connect with many significant punches the second half of the fight.

Rodriguez (8-4-1, 4 KOs) got off to a good start, buckling Camacho’s legs with right hands to the head in the first and second rounds. They traded punches in the third, but from then on Rodriguez out-boxed his rival and controlled the action to win a 6-round majority decision by scores of 58-56, 58-56 and 57-57.

Both boxers are from Juana Diaz, Puerto Rico.