M6 closed in Lancashire as lorry crashes into bridge 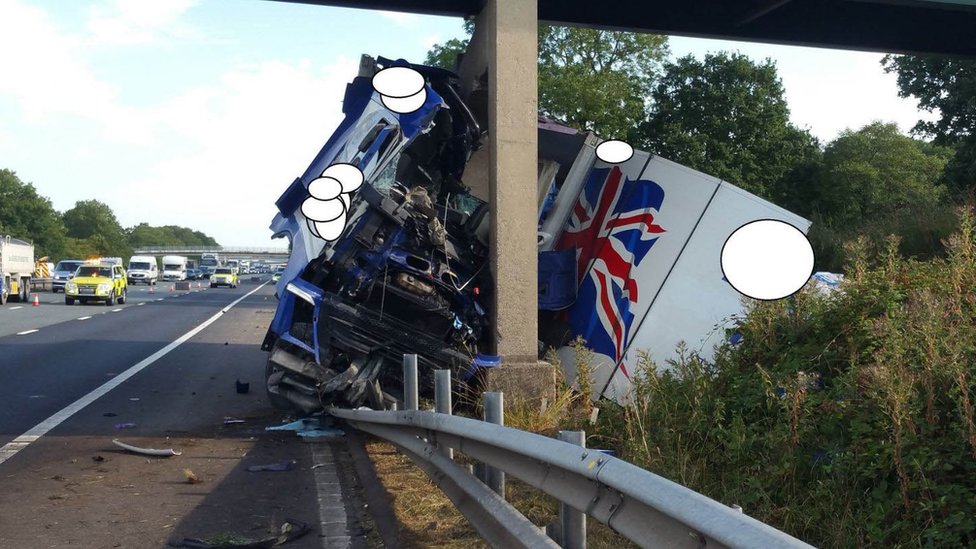 The M6 has been closed in both directions in Lancashire after a lorry crashed into a bridge, leaving hundreds of drivers stranded on the carriageway.

It happened between Junctions 33 at Galgate, Lancaster and 32 at Broughton, Preston at 06:45 BST.

Police said the lorry driver had been taken to hospital and would remain there overnight but was “doing fine”.

The crash cracked the cattle bridge’s stanchion and was now “the only thing holding it up”, a spokesman added.

Lancashire Police said the stretch of road would “definitely remain closed until later tonight” and “possibly beyond”.

Insp Andy Trotter said the lorry was “embedded” in the bridge.

Officers have been handing out bottles of water and sandwiches donated by supermarkets to drivers.

Writing on Twitter, motorist Adi Fawcett thanked the force for the “cold water” he had been given “on a ridiculously hot day”.

Other drivers have also tweeted their gratitude to officers who offered refreshments to families.

A Highways England spokesman warned drivers that surrounding roads were “extremely busy and slow-moving” and advised people to beware of the heat and stay hydrated.

The incident has also affected traffic on the M61 as well as the M55 and A6.

Drivers have been advised to find alternative routes or delay their journeys.

Darren Wilson, who was travelling to the Kendal Calling music festival near Penrith, described the disruptions as “chaos”.

Meanwhile, Burnley football supporters travelling north to Aberdeen for the club’s Europa League clash with Aberdeen were advised by the club to find alternative routes.

People heading to Kendal Calling have been urged to consider using the M1 and A1, before joining the M6 at Penrith via the A66.

Phil Stockford, of Highways England, thanked drivers for their patience.

He added: “The safety of road users is our priority and we cannot reopen the motorway until we are happy it is safe to do so.

“We currently have specialists on scene, who will advise on what needs to be done to make the bridge and motorway safe.”