London attack: 12 arrested in Barking after van and knife attack 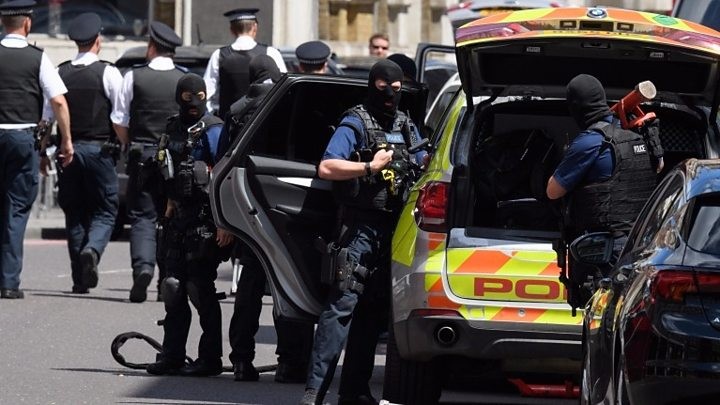 Twelve people have been arrested after the London terror attack which left seven people dead and 48 injured.

The arrests in Barking, east London, followed a raid at a flat belonging to one of the three attackers.

A van hit pedestrians on London Bridge at 21:58 BST on Saturday. Three men then got out and stabbed people in nearby Borough Market.

The attackers were shot dead by eight officers who fired 50 bullets. A member of the public was accidentally shot.

Of the 12 people who were arrested, seven are women. A 55-year-old man was later released without charge.

Meanwhile, Canadian national Chrissy Archibald has been named by Canadian broadcaster CTV as the first victim of the attack.

A statement from her family said she “believed strongly that every person was to be valued and respected”.

It said she had worked in a homeless shelter until she moved to Europe to be with her fiance.

The so-called Islamic State group has claimed responsibility for the attack.

Assistant Commissioner Mark Rowley said the police had reacted knowing the attackers “had to be stopped immediately”.

“The situation these officers were confronted with was critical, a matter of life and death – three armed men wearing what appeared to be suicide belts,” he said.

The vests were later found to be hoaxes.

Mr Rowley said 36 people were in hospital with a “range of injuries” and 21 were in a critical condition.

Malik Ramadhan, a doctor at the Royal London Hospital, said his team had treated one man who had been shot in the head and was expected to make a full recovery.

Both London Bridge rail and Tube stations are due to reopen on Monday from 05:00 BST but the rail station will be exit only, Network Rail said.

The mother of 23-year-old Daniel O’Neill, who is recovering in hospital after being stabbed, told the BBC he had a seven-inch scar from the knife attack.

“He had just stepped outside the bar for a second and a man ran up to him and said ‘this is for my family, this is for Islam’ and stuck a knife in him,” Elisabeth O’Neill said.

“I’m still in shock. I can’t quite believe it’s happened.”

Sunday Express journalist and martial arts expert, Geoff Ho, who was injured, said that he helped defend a bouncer from the attackers outside the Southwark Tavern as it “isn’t happening on my watch”, his newspaper reported.

Controlled explosions were carried out at the flat in Barking during the raids on Sunday morning.

According to neighbours, the dead attacker lived there for about three years and was married with two children.

One man, who did not want to be named, told the BBC’s Asian Network that one of the attackers had become more extreme over the past two years.

“We spoke about a particular attack that happened and like most radicals he had a justification for anything – everything and anything.

“And that day I realised that I need to contact the authorities,” he said.

He said no action was taken.

“I did my bit… but the authorities didn’t do their bit,” he said.

Most political parties have suspended national general election campaigning, but the prime minister said full campaigning would resume on Monday.

The general election will go ahead as planned on Thursday.

Condemning the attack, Theresa May said it was “time to say enough is enough”.

Eyewitnesses described a van travelling at high speed along London Bridge, hitting pedestrians, before crashing close to the Barrowboy and Banker pub.

The white Renault van used was recently hired by one of the attackers, Mr Rowley said.

Four police officers who tried to stop the attack were among those injured, two of them seriously.

One of them was an off-duty officer and amateur rugby player who tackled one of the terrorists, suffering stab wounds.

Another, a British Transport Police officer who joined the force less than two years ago, took on the attackers armed with only his baton.

The three suspects were shot dead within eight minutes of the first 999 call being received.

Among the other developments:

BBC reporter Holly Jones, who was on the bridge, said the van was “probably travelling at about 50 miles an hour” and hit “five or six people”.

According to another witness, Eric, the men inside jumped out once the van crashed and “ran towards the people that they nearly ran over”.

“[Then] they literally just started kicking them, punching them, they took out knives… it was a rampage really,” he said.

One man, Gerard, told the BBC he saw a woman being stabbed “10 or 15 times” by men shouting “This is for Allah”.

Steven Gibbs, who was drinking in a pub metres from the scene, told the BBC: “A black cab drove past and the driver shouted, ‘Terrorist attack, run!’

“I stood up to take a look and then all of a sudden there were gunshots. Lots of people were screaming.”

Hundreds of people were stranded after being unable to return to their homes and hotels.

As with the Manchester attack, there were stories of Londoners coming to each other’s aid, offering free taxi rides, free accommodation or just the opportunity to call friends and family – many using the hashtag on social media #sofaforLondon.

Speaking in Downing Street after a meeting of the government’s emergency Cobra committee, the prime minister said the country “cannot and must not pretend that things can continue as they are”.

Mrs May said there was “too much tolerance of extremism in our country” and while it would involve “some difficult and embarrassing conversations”, that must change.

In a speech, Labour leader Jeremy Corbyn backed the police to use “whatever force is necessary” to save lives.

Inspired by IS: By Frank Gardner, BBC security correspondent

All through the night, supporters of so-called Islamic State celebrated the London attack, even before any claim was made by IS.

There was never much doubt either in their minds, or in those of British counter-terrorism officials, that this was a jihadist attack inspired by IS.

It follows a widely-circulated propaganda message put out by the group on social media urging its followers to attack civilians in the West using trucks, knives or guns.

The message makes reference to the current Islamic holy month of Ramadan. Last year, attacks intensified during this month with deaths resulting in Istanbul, Dhaka and Baghdad.

Some analysts see this as a last desperate bid by IS to its supporters, following multiple setbacks in the Middle East where its self-proclaimed caliphate is shrinking fast.

But the ideology of IS is likely to survive those defeats – and will continue to fuel terrorist attacks around the world.

London Mayor Sadiq Khan said the capital remained the “safest global city” and would not be cowed by terrorism.

Harun Khan, secretary general of the Muslim Council of Britain, said Muslims everywhere were “outraged and disgusted at these cowards who once again have destroyed the lives of our fellow Britons”.

With three attacks in three months, terrorism against soft targets is beginning to feel, to some people, like the new normal.

The brutal reality is that this kind of threat is absolutely typical of what jihadists sought to achieve in all their attacks across Europe.

Since 2013 security services in the UK have foiled 18 plots. A large proportion of those have involved suspects who set out to commit acts of violence similar to the attack on Westminster Bridge and London Bridge.

Plans to use bombs, such as at Manchester Arena, are rarer because plotters need to have the technical skills for such an appalling attack – but attacking people with cars and knives is far easier and has long been encouraged by so-called Islamic State and other jihadists.

The aim of the three attackers last night is abundantly clear – not only did they want to kill, but they wanted to lose their own lives.

They would’ve known full well that attacking people in the street would draw armed police in their direction and the fake bomb belts they were wearing would, in their own warped minds, hasten their demise.

The police are asking anyone with photographs or videos of the incident to upload them here.

The area around the attack scene remains cordoned off, with London Bridge closed.

Police said the cordon would remain in place overnight and “well into Monday” and people would not be able to access their properties until it was lifted.

Were you in the area? Have you seen what has happened? If you are willing to do so, share with us by emailing haveyoursay@bbc.co.uk.