Full of SUR-prises! Before settling down with Ken Todd, Lisa Vanderpump had her fun.

The restauranteur, 58, opened up about her past while she and Vanderpump Rules star Katie Maloney made shocking confessions about their love lives alongside Brittany Cartwright.

“Ho days? Well, of course [I had them], before I was married,” Vanderpump, who wed Todd in 1982, admitted on the Monday, March 4, episode of Vanderpump Rules’ season 7 after show. “But I didn’t meet somebody, sleep with them, get drunk and never see them again.” 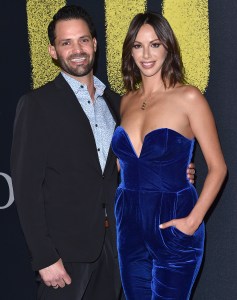 Kristen Doute and Brian Carter arrive at the premiere of Universal Pictures’ ‘Pitch Perfect 3’ at Dolby Theatre on December 12, 2017 in Hollywood, California. Axelle/Bauer-Griffin/FilmMagic

“I was at a club with some friends, it was a birthday and I met Carter. And then I slept with him,” Maloney said, to which Vanderpump replied, “What? You slept with Carter? Since you’ve been married?”

Although Maloney didn’t clarify the timeline, she noted that her hookup with Carter happened “two years before” she met Tom Schwartz, who she wed in August 2017.

“Thank God for that. I nearly went into cardiac arrest,” the businesswoman teased. Maloney then exclaimed that she “had a great single life.”

Although Carter and Doute, 36, have been together since September 2015, she previously hinted that they were having trouble. “We’re figuring it out,” she said in February on Watch What Happens Live With Andy Cohen after a viewer asked her for a relationship update. “Especially if you want to talk about what’s happening today, like, the show airing and what’s been going on in our relationship for the past year or more, like, we’re figuring it out. So I’ll let you all know when we get to that place.”

However, Doute praised Carter on Saturday, March 2, for taking care of their Yorkie Gibson during a pit bull attack. “Thank you for handling all this on your own,” she wrote on her Instagram Story of her beau. “You are the best dog dad ever.