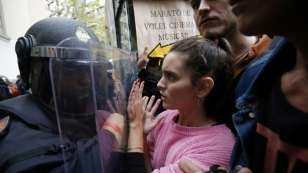 Las Palmas will wear a Spanish flag on their shirts for Sunday’s La Liga clash at Barcelona (1415GMT) as shocking political events in Catalonia on Sunday overshadow action on the field.

Las Palmas will wear a Spanish flag on their shirts for Sunday’s La Liga clash at Barcelona (1415GMT) as shocking political events in Catalonia on Sunday overshadow action on the field.

Spanish riot police fired rubber bullets and forced their way into activist-held polling stations in Catalonia as thousands attempted to vote in an independence referendum deemed illegal by the Spanish government.

According to Spanish media reports, Barca have called an emergency meeting to discuss with security forces whether the match can go ahead.

“We have decided to embroider on our shirt a small Spanish flag and today’s date, October 1, to quietly demonstrate our hope in the future of this country, and in the good will of those who live in it, in search of the best understanding,” Las Palmas said in a statement.

Barca have long supported Catalonia’s right for a vote on independence, without throwing their weight behind the yes or no camp.

Last week the club released a strongly-worded statement condemning arrests of regional Catalan government figures in “the defence of the nation, to democracy, to freedom of speech, and to self-determination”.

However, Las Palmas criticised Barca’s stance for heightening the tension around the match should it go ahead.

“Today Las Palmas pay a visit on an unprecedented day for our country, a day in which the Catalan government have decided to celebrate a referendum against Spanish law, with all the international exposure that events in the Camp Nou will have,” continued Las Palmas’ statement.

“The public statements in recent days, especially those of our hosts FC Barcelona, have converted this La Liga match into something more than a mere sporting spectacle.”

“I have voted. Together we are unstoppable defending democracy,” said Pique.

“It is unacceptable that in a democratic country people cannot vote,” added Xavi.

And former Barca captain Carles Puyol added his support for the referendum by posting “To vote is democracy!” on his Twitter account.