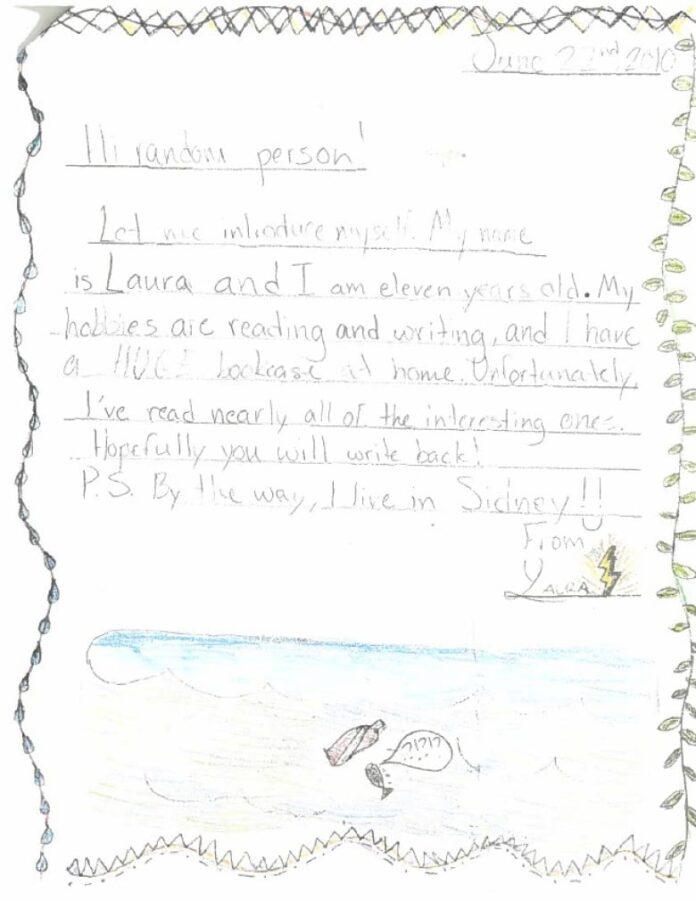 David “Norberg” Klengenberg was gathering wood near the shore of the Arctic Ocean for a recent camping trip when he spotted something gleaming on the sand.

Curious, the Kugluktuk, Nunavut, resident wandered over, and picked up a bottle.

Upon inspection, Klengenberg was surprised to find there was a note inside. When he read the message, he saw it was written in 2010.

The author of the letter was an eleven-year-old girl named Laura.

She began with: “Hi random person!” Before sharing that she lives in Sidney, B.C., and that “her hobbies are reading and writing, and I have a huge bookcase at home.”

Laura’s letter is part of the Department of Fisheries and Oceans Drift Bottle Project, which began in 2007.

Eight thousand bottles have been deployed at locations across the Arctic, Pacific and Atlantic Oceans at different times throughout the year.

So far, 2,000 of those bottles have been dropped in the Arctic Ocean.

One goal is to study how the surface waters move, said Humfrey Melling, a research scientist with the Fisheries and Oceans Department.

Information gathered from the project “provides us with a historical record of information” about where objects end up after being dropped in one location, Melling explained.

Though Laura lived down on Vancouver Island, near the U.S. border, her bottle didn’t travel very far.

“It appears to have had a relatively mundane journey,” said Melling.

He said it was launched 100 km northeast of Kugluktuk. From there, it bobbed along to the beach near the hamlet, where Klengenberg found it nine years later.

“It’s not something that is going to be very startling to people,” Melling said. “Some things that go in the ocean may come to shore very quickly. But some of these are world travelers.”

Melling said that some equipment lost in the Beaufort Sea — and some dropped bottles — have travelled across the Arctic Ocean and through the Atlantic Ocean before arriving on the coasts of Ireland, Scotland and Norway.

He added that the department hopes the message-in-a-bottle project raises people’s interest in oceanography.

Klengenberg is happy to have received one of those messages, and hopes to connect with Laura, who should now be around 20 years old.

“I wouldn’t mind trying to get a hold of this person, and tell them where I found it and writing to them,” he said.