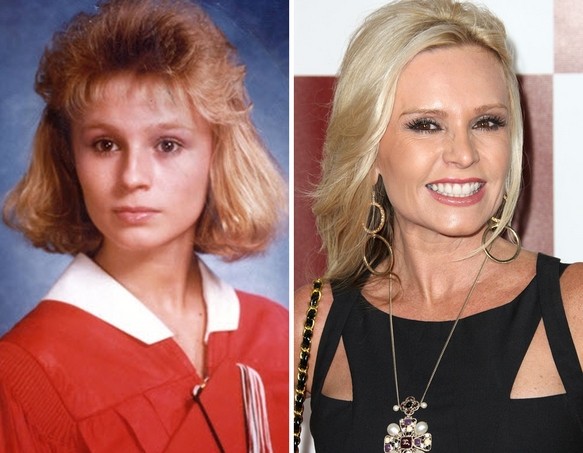 There is no official rule book for being a Real Housewife. No commandment written in stone that says, thou must stab thou neighbor in the back or thou shall not ever pack for a trip off-camera. And it seems highly unlikely that the ancient seas have unearthed a scroll decreeing that Scary Island will be the center of all drama.

And yet there are a great many unwritten rules, one of which seems to be that plastic surgery is a rite of passage. Nay, even a requirement of passage. Looking good is integral to being on television, and clinging to youth (or at least a youthful appearance) at all cost is one of the few things that binds these women from all walks of life together. This passion for surgical treatment is evident from the first moment the audience meets many of the cast of the Real Housewives.

“If you’re going to talk about me behind my back, at least check out my great ass,” decries Carole Radziwill in the opening credits of New York’s sixth season. Alexis Bellino of Orange County dared to ask, “God is my savior, my husband is my king, and my body? It’s sinful.” And Vicki Gunvalson rained down from the heavens to declare simply, “I don’t want to get old!”

The only thing for a woman on reality television to do in this situation is to go under the knife. And the women of Sir Andy Cohen‘s kingdom have played that hand masterfully. They nipped, they’ve tucked, they’ve sucked, they’ve sliced. They’ve fat-blasted and they’ve rejuvenated and they’ve lifted everything that possibly could be. And most of that has been on the record: For the Housewives may be many things, but they are not stupid. They know that there’s no use in keeping plastic surgery a secret, certainly not when there is money or endorsements to be had.

The result is that the cast members have spoken about a great many different procedures, making it easy to create an oral history of every last nose job (there have been seven admitted to) and breast augmentation (make that 17 and counting).

To start, 34 different current and former members of the cast have been candid about their past plastic surgeries. The residents of New Jersey seem to have the greatest affinity for going under the knife, with 17 among them. Teresa Giudicehad a breast enhancement, Melissa Gorga had a nose job and a breast enhancement, Caroline Manzo had a tummy tuck, Siggy Flicker had a facelift, Botox and a breast enhancement, Dolores Catania had a Brazilian butt lift and breast surgery, Danielle Staub had lip injections and breast surgery. And Jacqueline Laurita, the crowned princess of (admitted) Real Housewives surgery, had Botox, fillers, a tummy tuck, a neck lift, breast implants and a nose job.

(And yes, for all those wondering, there is only one Brazilian butt lift in the history of the Housewives admitted plastic surgery.)

According to careful scientific evaluations, breast augmentations are by far the most popular surgery of all the combined casts and three different women (Siggy Flicker, Eden Sassoon and Tamra Barney) have subsequently removed their implants—although, technically speaking, Barney had hers put back in again. Nose jobs and Botox injections are also incredibly popular, and special props should be given to both Brandi Glanville and Sonja Morgan for their brave stories of vaginal rejuvenation. They are, thus far, the only women who have spoken out about such a surgery.

The cost of these procedures is a whole other thing in particular. Of course, many of the cast members receive discounted or even comped (read: free) work in exchange for promotion of the doctor or clinic, but the sticker prices will leave those whose motto isn’t “When life throws rocks, I melt them down into diamonds” or “I never feel guilty about being privileged” in quite a shock. For example, a single Botox procedure is around $1,400 (and no one ever gets just one Botox procedure). A nose job costs upwards of $12,000. A breast enlargement starts at $5,000 in the Atlanta area and can be as much as $12,000 in Beverly Hills.

For those aforementioned vaginal rejuvenations on Sonja and Brandi, it’s a combined $22,000. The Atlanta cast has spent (in face value) $30,000 in breast augmentation. And the realm of Housewives has shelled out for $56,000 worth of face lifts.

But you know what they say: Life isn’t all diamonds and rosé and plastic surgery, but it should be! Or something like that.