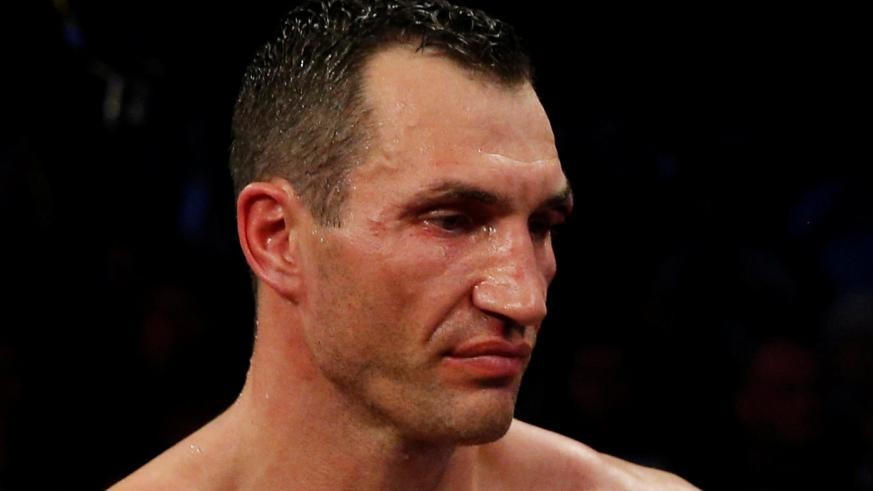 Wladimir Klitschko, one of the longest-reigning heavyweight champions in boxing history, announced his retirement on Thursday, ending a 21-year professional career in which he competed in more heavyweight title bouts than anyone.

Klitschko’s final bout, on April 29 before a crowd of 90,000 at sold-out Wembley Stadium in London, was his 29th heavyweight title fight appearance — two more than the legendary Joe Louis — and it was a classic battle against England’s Anthony Joshua, who had once sparred with Klitschko but against whom he now was defending his title.

It was a rousing, dramatic fight of the year contender in which both fighters got knocked down and showed enormous grit. But Klitschko, 41, went down three times overall and was stopped in the 11th round.

It was Klitschko’s second consecutive defeat following a massive upset loss to Tyson Fury 17 months earlier that cost him the unified world championship he had held for nearly a decade.

Klitschko (64-5, 54 KOs) had the right to an immediate rematch with Joshua and most thought he would accept the fight, so much so that Klitschko’s team and Joshua promoter Eddie Hearn of Matchroom Boxing were proceeding as though it was going to happen and making plans for a Nov. 11 rematch in Las Vegas.

However, Klitschko still had not made up his mind about whether he wanted to exercise his rematch option and the decision lingered. He had said after the April fight that he wanted time to think about his future, but also said if he did return it would be only to fight Joshua.

Now he has made up his mind, and he has decided on retirement.

“I deliberately took a few weeks to make my decision, to make sure I had enough distance from the fight at Wembley Stadium,” Klitschko said. “As an amateur and a professional boxer, I have achieved everything I dreamed of, and now I want to start my second career after sports. I would have never imagined that I would have such a long and incredibly successful boxing career. I’m very thankful for this. Thanks to everyone who has always supported me especially my family, my team and my many fans.”

Klitschko, who is from Ukraine, became a star in Germany, where his fights were spectacles in sold-out soccer stadiums across the country. He also spends considerable time in the United States, where he and his longtime fiancée, the actress Hayden Panettiere, are raising a toddler daughter. He walks away from the ring on his own terms as one of the most decorated fighters in history. He won the Olympic super heavyweight gold medal as an amateur in 1996, was a two-time world champion as a professional and earned hundreds of millions of dollars.

“Especially after this terrific fight at Wembley Stadium it was a very tough decision for Wladimir to make,” longtime Klitschko manager Bernd Boente said. “But he has always emphasized that he wanted to retire if he didn’t have enough motivation anymore. Therefore this is definitively the right decision. Wladimir accomplished everything in his unique boxing career. He dominated the heavyweight division for over a decade. He fought in sold-out arenas and stadiums worldwide and millions of fans around the world watched his fights on TV. It has been a privilege for me to accompany Wladimir on this unique journey.”

Wladimir Klitschko holds the world title belts that he won during his career. Lars Baron/Bongarts/Getty Images

Klitschko’s second world title reign, from his 2006 victory over Chris Byrd to the loss to Fury in 2015, was one of the most dominant in boxing history in any weight division. He was rarely challenged as he rolled past top opponent after top opponent to unify three belts. He never had a chance for the fourth belt, however, because older brother Vitali Klitschko, also a future Hall of Famer, held it for several years. But Wladimir Klitschko never had a problem with being unable to obtain the fourth title because he and his brother had often stated that their goal was to hold the titles at the same time, which they accomplished. They had also promised their mother that they would never fight each other.

Klitschko’s second reign lasted for 9 years, 7 months and 7 days, the second-longest heavyweight title tenure in history behind only Louis, who held the title for 11 years, 8 months and 8 days. During the reign, Klitschko made 18 consecutive defenses, third-most in division history behind only two other legends, Louis (25, the all-time record for any weight class) and Larry Holmes (20).

“Wladimir Klitschko earned his right into the Hall of Fame years ago,” said Peter Nelson, executive vice president of HBO Sports, Klitschko’s longtime American broadcast partner. “His accomplishments in the ring will be immortalized in the record books. Outside the ring, Wladimir is well respected as a true ambassador to boxing and role model in sport, contributing vastly philanthropically as a leader of community activism and with a profound commitment to improving the lives of children worldwide. We are proud Wladimir and his team have been in the HBO Sports family for the majority of his 21-year career. We are excited for him and his family as he begins his next chapter.”

Known as “Dr. Steelhammer” — he has a doctorate — he won his first title with a one-sided decision over Byrd in October 2000 and defended that belt five times before a shocking second-round knockout loss to big puncher Corrie Sanders in 2003. In 2004, Klitschko got a shot at a vacant belt against Lamon Brewster and was battering him all over the ring until stunningly running out of gas and getting knocked out in the fifth round in Las Vegas.

Klitschko, who had been stopped in the 10th round by journeyman Ross Puritty in 1998, was written off my most. Klitschko took that loss to Brewster hard but resolved to come back to the top of boxing. As a reminder of where he had fallen to, Klitschko keeps the gloves he wore in that fight on display in his office and he carries a business card given to him by Brewster’s former manager with him. On that card is a photo of Brewster knocking Klitschko out that is signed by Brewster.

That loss was also Klitschko’s first fight under the tutelage of the late, great Hall of Fame trainer Emanuel Steward. But they stayed together despite the defeat and Steward helped rebuild Klitschko in a dominant fighting machine. They were together for 17 fights until Steward’s death in 2012. Klitschko replaced him with Steward protégé and former sparring partner Johnathon Banks and he continued to win with ease, rarely even losing rounds until the upset at the hands of Fury, whose personal problems with drugs, alcohol and mental health kept him out of a contractual rematch that was twice canceled.

Fury’s issues kept Klitschko out of the ring while he waited for the rematch before he finally returned to face the young Joshua for his belt and a vacant one. Although Klitschko lost the fight he showed tremendous heart and made it the most exciting fight of his career. Despite the defeat, it was a high note on which to go out because he had so been so heavily criticized for being a boring, clinical fighter. The truth was that he so dominated his opponents he made it all look so easy even if not overly exciting. But he did beat virtually all the heavyweights of note during his time, although it was a down era.

Klitschko said he made the decision to retire at the right time even though he could have had another huge fight with Joshua and earned in the $20 million range.

“27 years ago [as an amateur] I started my journey in sports and it was the best choice of a professional I could have ever made,” Klitschko said.

“Because of this choice, I’ve travelled the world, learned new languages, created businesses, built intellectual properties, helped people in need, became a scientist, entrepreneur, motivator, hotelier, trainer, investor and much else. I was and am still capable of doing all this because of the global appeal of the sport of boxing.

“At some point in our lives we need to, or just want to, switch our careers and get ourselves ready for the next chapter and chart are new course toward fresh challenges. Obviously, I’m not an exception to this and now is my turn. I’m honestly doing this with the greatest respect for the new challenges, but also with tremendous excitement, passion, dedication expecting and hoping that my next career, which I’ve already been planning and working on for some years, will be at least as successful as my previous one. “Finally, instead of just saying thanks and goodbye, I want you to continue to enjoy me in this new and exciting journey. When we’re together we’re more creative, more efficient, more productive and simply stronger in every way. Together we’re the driving force.”