Kidnapping: End of ‘Evans the Terrible’ 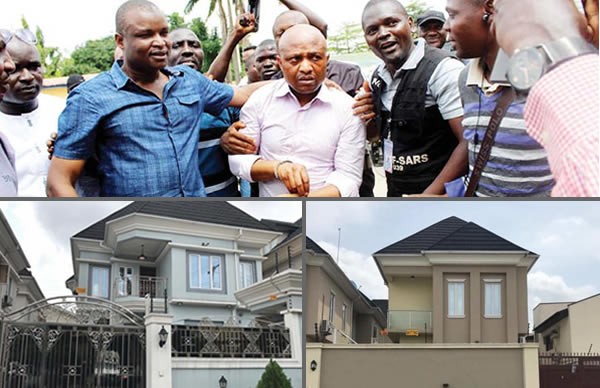 AFTER a long-drawn-out escapade, the long arm of the law has finally caught up with a kidnap kingpin, Chukwudubem Onwuamadike. A special police Intelligence Response Team working with officers from the Lagos State Command captured “Evans the Terrible” last weekend in his palatial Magodo, Lagos home. The arrest evoked collective relief and triggered spontaneous jubilation among officers and observers who witnessed the operation.Evans, a career criminal,evaded justice for years. He faces an array of kidnapping, armed robbery and drug charges.  This heart-warming moment should not, however, mislead the police – and the public – into the false belief that kidnapping and sundry crimes have been significantly undermined.

Evans, 36, is as notorious, powerful and wealthy as they come. His criminality began early in life, according to his own testimonies. Nigeria’s latest most infamous criminal, is shrewd and intelligent. He had an uncanny habit of disappearing without even his gang members noticing. Born into an affluent family in Nnewi, Anambra State, he however dropped out in Junior Secondary School II. His father’s attempt to make him learn the auto spare parts business in Nnewi was aborted when he was allegedly dismissed by his boss for stealing.

Crime paid off for Evans because he was a unique operator. His operations spanned Abuja, Anambra, Edo, Rivers, Bayelsa and Lagos states. And his evil business ranged from drug dealing to armed robbery and kidnapping of high networth victims.  His spheres of influence stretched throughout the South of Nigeria and reached as far away as South Africa and Canada. In Lagos, he initially made FESTAC Town his operational base, before relocating to Magodo. Every time the noose was tightened around him, he found a way to escape abroad – to either Ghana or South Africa. His operations were sometimes so violent that his gang once burnt down a police station in Nsukka, Enugu State, after they robbed a bank. To escape the law, he distracted police officers by spraying wads of naira notes to bystanders.

His notoriety is frightening, having twice stolen huge amounts of money from his bosses in Lagos before disappearing abroad, where he acquired properties and donated generously to charity. He once kidnapped his boss’ daughter, which netted N22 million. He then began collecting ransoms of between N50 million and N100 million. Some of his victims included the proprietor of the Young Shall Grow Motors, Vincent Obianodo, James Uduji and Uche Okoroafor.

Later, he started collecting ransom in dollars. His charges were non-negotiable. The police noted that he collected $1 million each from four victims, buying several swanky properties in Nigeria, Ghana and Canada, where he relocated his family. Expensive automobiles and women were his for the taking. He coordinated his troops across the country without any of the gang members knowing his residence. But his end came when a pharmacist his gang kidnapped miraculously escaped from their hideout in Igando, a suburb of Lagos. The victim, having alerted the authorities, the IRT moved in from Abuja and grabbed him as he was about to flee the country.

Evans’s exploits cannot be blamed solely on his early family life and conspirators. He is just a symbol of a crime-infested society. It goes without saying that Evans had collaborators in the police and the judiciary, who ensured that he was tipped off each time the law was about to catch up with him. From his own account, he was arraigned in court along with his wife early this year but he bribed his way out. The police authorities should not only be aware of these fifth columnists that collude with criminals, but should also investigate the judicial officials who are neck-deep in this malpractice.

Evidence that kidnapping is not about to abate is found in the recent incidents in Lagos in which kidnappers stole six kids at the Lagos State Model College, Epe, in May. In January, the bandits kidnapped eight pupils and two employees of the Nigerian-Turkish International College, Ogun State. For a while now, kidnappers have taken control of the Abuja-Kaduna Expressway, abducting at will.

In recognition of the upsurge, several states have enacted laws making kidnapping a capital offence, along with seizure or demolition of the properties traced to proceeds of the crime. The Evans case, therefore, is a litmus test for a new law, made in Lagos State in February. If he is convicted of killing in the course of kidnapping, Governor Akinwunmi Ambode should be bold enough to sign the death warrant as the law dictates. Otherwise, criminals and their collaborators will not be deterred.

The police have won praise for capturing Evans and his gang members, using high-end technology. But for every Evans in the police net, there are still 100 more on the loose. Therefore, the police should build on this arrest by decentralising their operations to the geo-political zones, and deploying more modern security infrastructure against criminals.

Evans is one kidnapper that should not be allowed to escape or die in a purported bid to escape. The police cannot afford a repeat of the humiliation they faced after a notorious kidnapper, Vampire, escaped from detention. Media reports indicate that Evans hinted at big names in his kidnapping syndicate, covering Ogun, Oyo, Abia, Anambra and Edo states. They all should be nabbed. But it should be acknowledged that the police were tactless in releasing such information when the felons had not yet been picked up. The Federal Government should invest in security equipment, while state governments need to boost police activities with hi-tech gadgets.

His success has placed him among the richest criminals in Nigerian history.  But there must be a whole list of others, as Evans has confessed, already lined up to pick up the reins, to take their portion of the lucrative kidnapping business. They must be stopped.The state must ensure all the proceeds of Evans’ kidnapping empire are confiscated. The evidence on the ground already spells the end for the slippery criminal.

Crime becomes uncontrollable when bandits have easy access to weapons. In Evans’ case, the police seized a cache of weapons enough to wage war against a decent community. This shows that too many illegal arms are still in wrong hands. This year, Nigeria Customs Service operatives have seized two imported cargoes carrying 661 and 440 high-calibre rifles. To win the war against crime in general, the government has to systematically mop up the loose arms, restrict weapons from entering the country and clamp down on officials who manipulate the system to the advantage of criminals.