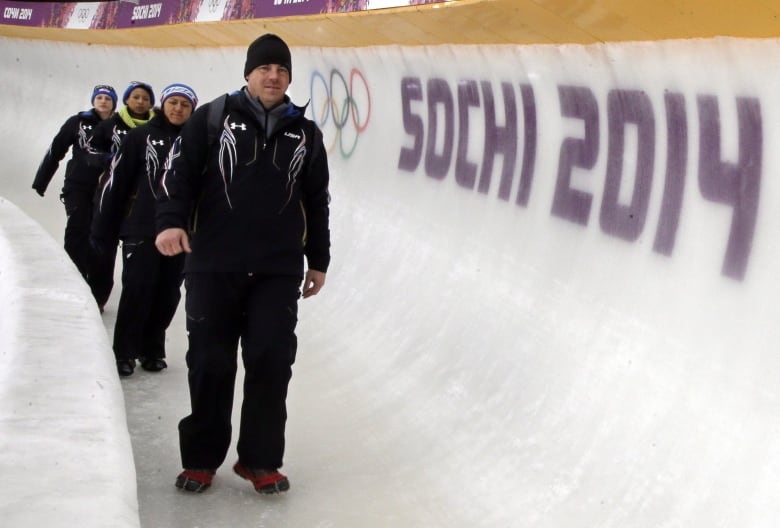 In August 2018, Humphries filed a harassment complaint with Bobsleigh Canada saying she no longer felt safe training and competing with Hays coaching her and could no longer compete for the team.

“I’m losing my career and I don’t want to lose my career based off of stepping forward, having the courage and the strength to stand up and to make a claim,” Humphries said exclusively to CBC Sports.

“I need to be the best athlete I can be and go where it’s safe and where I have an opportunity to continue my career. And unfortunately, that is not with Bobsleigh Canada anymore.”

Humphries took last season off from competition awaiting a resolution as the sport organization conducted its own internal investigation.

Bobsleigh Canada says the investigation is still ongoing. Humphries has now asked to be released from the team so that she can continue her career competing for the United States. Humphries says she has been forced into this decision.

She is suing the national governing body for blocking her release from the team and breaching their contract relating to athlete and coach code of conduct.

WATCH | Kaillie Humphries ready to move on from Bobsleigh Canada

CBC Sports’ Devin Heroux breaks down Kaillie Humphries’ decision to leave Bobsleigh Canada and the lawsuit she filed after having her request to be released denied. 2:05

“I have done everything I can but cannot return to a work environment that I do not believe is safe,” Humphries said.

“This has been the most difficult ordeal of my life and I want Canada to know that competing for you and winning for you at the Olympics will always be the highlight of my career.”

In court documents filed by Humphries and her legal team, Humphries names Hays and outlines several occasions during the 2017-18 season when she claims she was emotionally, verbally and mentally abused. Bobsleigh Canada has yet to file a statement of defence.

Humphries is suing Bobsleigh Canada to be released, claiming that she was in “an environment that is unsafe.” 2:54

“After over an hour of verbal insults attacking me personally and professionally in a public place with people watching, I began to cry out of frustration, hurt feelings, and astonishment at what he was saying,” Humphries said in court documents.

CBC Sports has learned that two former athletes coached by Hays during his time with USA Bobsled also filed reports with SafeSport in the United States last October. Speaking anonymously to CBC Sports, they allege Hays was emotionally, verbally and physically abusive.

“Todd Hays was physically, verbally, and mentally abusive during his tenure and although the team won medals, his behaviour has lasting effects on his athletes, including myself,” said one of the former athletes reporting to SafeSport.

CBC Sports has not confirmed what the findings of these reports were.

The U.S. Center for SafeSport is an independent organization that investigates all types of abuse. The national organization provides a safe and confidential space for individuals to report abuse within the U.S. Olympic and Paralympic movements.

USA Bobsled says Hays’ contract wasn’t renewed in 2014 after restructuring the program and consolidating the men’s and women’s teams for “better collaboration among the coaches.”

“That structure did not play to Todd’s coaching style,” said spokesperson Amanda Bird.

In a statement to CBC Sports, Bobsleigh Canada said it abides by its harassment and discrimination policy that has been in place since 2006.

Bobsleigh Canada says Hays will not be commenting on Humphries’ allegations.

“As the matter is before the courts there will be no comment from Todd Hays until this is wrapped up,” the organization said.

In a statement to CBC Sports Friday, AthletesCAN says it’s “saddened by, but fully supportive of Kaillie in her decision to stop competing for Canada.”

The organization representing national team athletes says they have supported Humphries over the last year in a number of ways, but “like Kaillie, have bumped up against a system that is currently broken.”

The statement also says losing one of Canada’s most successful and recognizable Olympic athletes due to a “flawed process and lack of action is devastating.”

To my friend <a href=”https://twitter.com/BobsledKaillie?ref_src=twsrc%5Etfw”>@BobsledKaillie</a>, you deserved so so much better.?? loss is ?? gain (as much as that pains me to say).It was a pleasure to witness your many highs (and lows) and train together through the years. Stay on the high road, it always wins! Go get yourself another ?!!? <a href=”https://t.co/eZ17MQ5vtL”>https://t.co/eZ17MQ5vtL</a>

“Nothing is more important than Kaillie’s health and safety, and whether it is in Canada or elsewhere, Kaillie has a right to participate in a sport environment she feels protected in.”

The Department of Canadian Heritage, which governs sports in Canada, echoed a similar statement.

“The issue of harassment, abuse and discrimination in sport is being addressed in collaboration with our partners in the sport community and with all levels of government in order to make sport a safe, welcoming and inclusive environment for all.”

The Canadian Olympic Committee (COC) said in a statement that it has offered assistance to both parties in the hopes that a fair resolution can be reached.

“Kaillie Humphries and Bobsleigh Canada’s work together over the past 15 years has not only produced podium-topping results, but has raised the profile of bobsleigh in Canada to new heights. The current situation is extremely unfortunate.”

Humphries plans to compete for U.S.

Humphries now says she’d rather compete for the U.S. She is marrying American Travis Armbruster, a former brakeman on the U.S. bobsleigh team, on Saturday.

“Being put into an environment that is unsafe. It’s not OK, let alone I’m going to be punished just for stating that those facts are existing to me,” Humphries said.

Humphries says once she secures her release from Team Canada, she will begin her process to become eligible to compete for the United States.

International Olympic Committee requirements dictate that an athlete changing countries “may participate in the Olympic Games to represent his new country provided that at least three years have passed since the competitor last represented [their] former country.”

She plans to attend a U.S. bobsleigh training camp in Lake Placid, N.Y., as a guest next week.

The USA bobsled skeleton organization said it would welcome Humphries should she meet certain standards.

“Our philosophy has been consistent in that we are very inclusive when it comes to our athletes. If an athlete meets our eligibility requirements and wants to represent the USA in bobsled or skeleton, we’ll give them a shot.”

“Kaillie is a great athlete and if she gets released from Canada and earns her way into the U.S. team, we’ll gladly treat her like any other USABS athlete.”

Humphries is a two-time Olympic champion and was named the 2014 Lou Marsh Award winner as the top athlete in Canada. She and brakeman Heather Moyse are the only female bobsleigh athletes to win back-to-back gold medals.