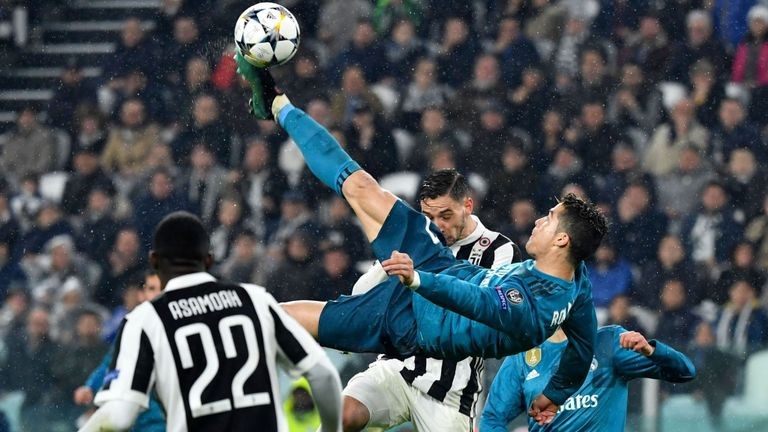 Cristiano Ronaldo scored a spectacular overhead kick as Real Madrid took firm control of their Champions League quarter-final against Juventus with a 3-0 first-leg win in Turin on Tuesday.

Ronaldo finished from Isco’s cross in the third minute to score in a record-breaking 10th consecutive Champions League match.

But better was to follow as the 33-year-old earned a standing ovation from the home fans with a memorable strike in the 64th minute.

Man of the match: Cristiano Ronaldo

Paulo Dybala was sent off shortly afterwards for a second booking and Marcelo then bolstered Real’s lead ahead of the second leg next Wednesday when he made it 3-0.

The game, though, will be remembered for Ronaldo’s moment of brilliance, which was his 22nd goal in the quarter-finals of the Champions League and one of the finest goals of his career.

His first of the night came after just three minutes as Juventus were caught cold, with Isco running into space down the left and crossing for an unmarked Ronaldo to finish from 10 yards out.

The hosts responded well to the early setback and Rodrigo Bentancur saw a shot blocked, Gonzalo Higuain shot at Keylor Navas from close range and Giorgio Chiellini miscued a header from a corner.

Real’s best opportunity to double their lead in the first half was in the 36th minute when Toni Kroos hit the bar with a shot from outside the box.

The Serie A side continued to look threatening after the break and Dybala saw a free-kick deflect narrowly wide.

However, Ronaldo’s moment of magic and then Dybala’s red card swung the tie firmly in Real Madrid’s favour.

Even the Juventus fans were on their feet and applauding after Ronaldo flung himself in the air and scored with a superb overhead kick.

Those same fans were soon heading for the exits as Dybala was shown a second yellow for catching Dani Carvajal in the air and then Marcelo finished a fine team move to make it 3-0 in the 72 minute.

There could have been more goals as Mateo Kovacic hit the bar and Ronaldo blazed a glorious chance for a hat-trick over in injury-time.

Juan Cuadrado then missed the chance to give Juventus a lifeline when he dragged a fantastic opening wide with the last kick of the match.

Real Madrid named the same starting XI that played in the Champions League final against Juventus last year. Ronaldo and Isco started while Bale was on the bench.
>br>Juventus made four changes from their win over AC Milan on Saturday, with De Sciglio, Alex Sandro, Bentancur and Douglas Costa starting. Benatia and Pjanic were suspended.

Man of the match – Cristiano Ronaldo

It was another night when Ronaldo starred for Real Madrid and moved them a step closer to yet another Champions League final. If he continues to score at this rate it will be tough to stop the defending champions.

Real Madrid host rivals Atletico Madrid in La Liga on Sunday, live on Sky Sports, before the second leg against Juventus at the Bernabeu on Wednesday. Juventus will be looking to keep their Serie A title challenge on track when they go to bottom-of-the-table Benevento on Saturday.