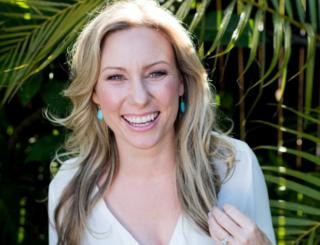 Investigators say that before Justine Damond was shot to death by a Minneapolis police officer, a woman “slapped” the back of his patrol car.

The search warrant issued by the Minnesota Bureau of Criminal Apprehension (BCA) does not say if that woman was the Australian yoga teacher.

The document may shed light on the possible source of the “loud sound” that startled the car’s driver.

Damond was killed by Officer Mohamed Noor after calling 911 two weeks ago.

The search warrant, which was provided to local news stations by investigators, stated: “Upon police arrival, a female ‘slaps’ the back of the patrol squad.

“After that, it is unknown to BCA agents what exactly happened, but the female became deceased in the alley.”

Mohamed Noor, who fired the fatal shot across his partner and through the driver’s window, has so far refused to be interviewed by investigators.

Officer Matthew Harrity, who was driving the police cruiser through the alley behind Damond’s home, has told detectives that they were startled by a “loud sound” just before the shooting.

Neither officer had turned on their body camera, which recently-adopted regulations require every officer to carry.

Both men have been placed on paid administrative leave.

The BCA report was compiled about seven hours after the shooting

Also detailed in the report are several items recovered from the scene and submitted for forensic examination by investigators.

A 9mm cartridge shell, Damond’s mobile phone, blood from the rear driver’s side door of the squad car, and fingerprints and spots on the rear and exterior of the vehicle were all recorded by the BCA.

Investigators have determined that Damond, who moved from Australia two years ago, was unarmed when she was killed.

Damond, 40, had called 911 twice before midnight to report a possible rape in her upscale Minneapolis neighbourhood about 20 minutes before her death,.

Her death, as well as the deaths of black men Philando Castile and Jamar Clark at the hands of police, has led to criticism of the police department and forced the resignation of the police chief on Friday.