Just Cool Cars: This Ford isn’t quite a Model A or a T – USA TODAY 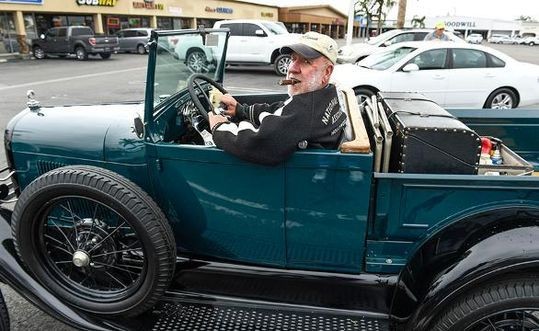 Larry McCullah behind the wheel of his restored Ford Model AR. McCullah was showing his car at the Donut Derelicts Car Show in Huntington Beach, Calif.(Photo: Robert Hanashiro, USA TODAY)

HUNTINGTON BEACH, Calif. — We’ve come across plenty of Ford Model Ts. And our share of Model As.

But we haven’t seen a Model AR.

McCullah, of Fullerton, Calif., loves collecting cars and the Model AR is a special part of it.

He says the original AR had a mix of parts that represented the two famous eras of Fords. It had a multi-disc clutch and different rear end. The car still has the original engine block.

McCullah, who owns cigar shop, has made some modifications of his own to make the car safer and easier to drive.

It’s not McCullah’s first roadster pickup. He says he owned a 1929 model when he was 15, but wrecked it. Now, he’s out to have fun with the new one.

“It’s got everything you bolt on to it to make it go faster,” McCullah told us at a car show at a doughnut shop in this city recently.

How fast? It’ll go 60 miles an hour on the freeway, he says. Not that we would want to try.